In five days, the face of the mall on L Street from 5th to 6th Streets has gone from a fairly well-maintained building to something that resembles a building hit by a bomb.  Excavators and small tractors called bobcats have torn down the  facade while other bobcats scoop up the remnants and haul them away.

The first use of heavy machinery this morning brought out dozens of people for a closer look.  John Malicki lives about a block away.

Heavy equipment called concrete nibblers and steel shears will take about a week to tear down and remove this section of the building.  The Sacramento Kings say demolition of the rest of the mall will take until fall to complete. The west side of the mall remains open for business.

The face of the Sacramento Downtown Plaza is rapidly disappearing. This morning, a large backhoe began tearing down the part of the mall at 6th and L Streets.

Local people have been coming to the site to see the work.

Jim Meier and his two-year-old son Henry were on the way to the Zoo, when they heard about the demolition and decided to stop by:

"I'd like to be doing the work, but it's petty awesome." 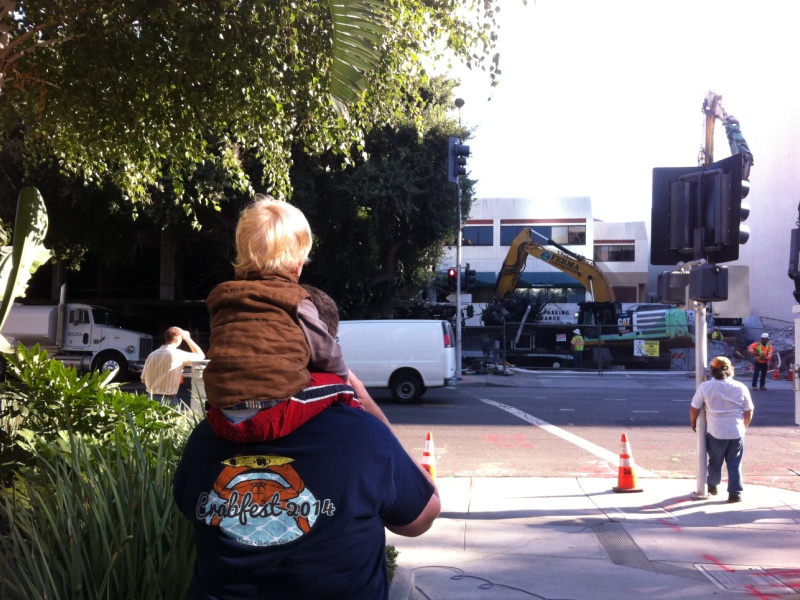 Michael Edwards says he had to be there:

"I'm down here to observe the mall destruction, and kind of feel the emotions that everyone's kinda going through with this whole issue."

Work began a little over a week ago, but up until now, workers had been dismantling the building piece by piece, and from the inside.

Arena construction is expected to start this fall.

Steve Milne: What are crews doing there now?

Bob Moffitt: Well, they're cleaning up the mess they've been creating the last hour or so. The last day or so, they've been removing the front paneling off of the L Street side of the Downtown plaza mall between 5th and 6th street, so now they're using larger machinery that can tear it down more quickly. They're then going to start tearing down from top to bottom. It's just easier and less dangerous for cars and passersby to remove it from the inside, it's just a lot faster to do it this way?

Milne: What should drivers  and pedestrians know about the area?

Moffitt:  There are flashing yellow lights, at 6th and L street. There are construction crews, occasionally having people stop to get trucks through, but there's not really any delay for traffic going through.

Bob Moffitt:  The whole front facing L Street is gone. Now they're going to start taking down concrete. They have three pieces of heavy machinery down here. They have a backhoe or an excavator, they also have this thing called the nibbler, that has teeth for taking apart pieces of concrete.  And then they have a thing called the shear, which is going to come through the steel beams that are  holding up the whole building. This is the first time they're taking down large chunks all at once.

Bob Moffitt: Construction crews just got done with their meeting and they're going to their appointed stations, we have some heavy equipment, some cranes, bulldozers and backhoes. They're getting ready to tear down the middle section  of the mall in right at 6th and L street. If you've driven down there, you've seen the facing of the mall on L Street and they've removed it piece by piece. Very much resembles a bomb area down here, with the entire front of the building missing as they continue to remove each piece.

Milne: When is the demolition scheduled to begin this morning? 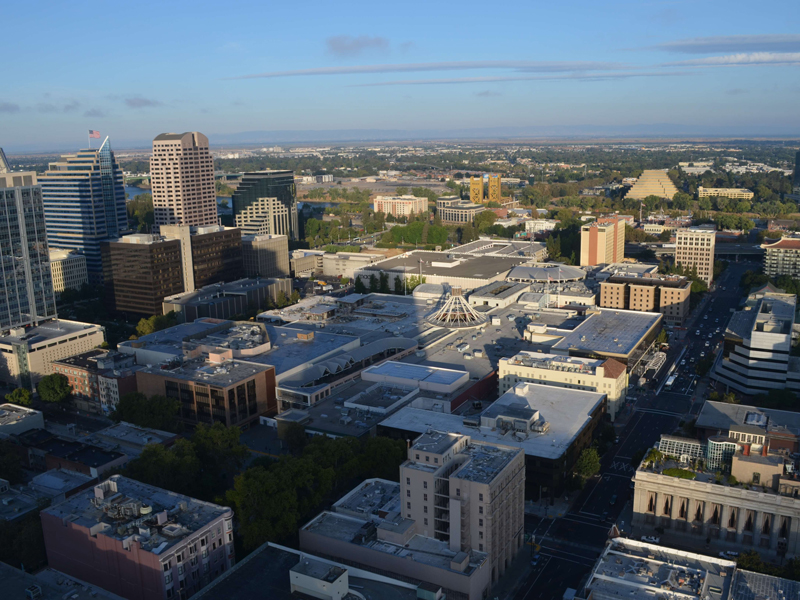