Gas is already expensive in California. And upcoming changes to the state’s Cap and Trade program could increase prices at the pump even more. That could be bad news for drivers and politicians.

At a busy Arco station in Sacramento, regular gas is going for $3.69 a gallon. That makes filling up the tank a pricey proposition. Coming changes to California’s Cap and Trade program may make it even more expensive.

Beginning next January, fuel suppliers in California will have to comply with the Cap and Trade program. The 2006 initiative seeks to reduce greenhouse gas emissions in the state. And it seems generally expected that the coming change will lead to higher gasoline prices.

Cassandra Appel laughs as she cleans her windshield.

“I’d have to start riding a bicycle," she says.

Gas prices are already too high for her. And Appel doesn’t know how she might deal with any increase after January. Projected increases range from 10 cents to 69 cents a gallon. But that doesn’t really worry John Lovell. He says he’d probably be more thoughtful about his driving.

“Like, on the weekend I’ll run all the errands in the family. I’ll do all the shopping," he says. "What I’ll do a lot is I’ll split it up during the day. I’d probably do it all as one trip. You know, just little things like that.” 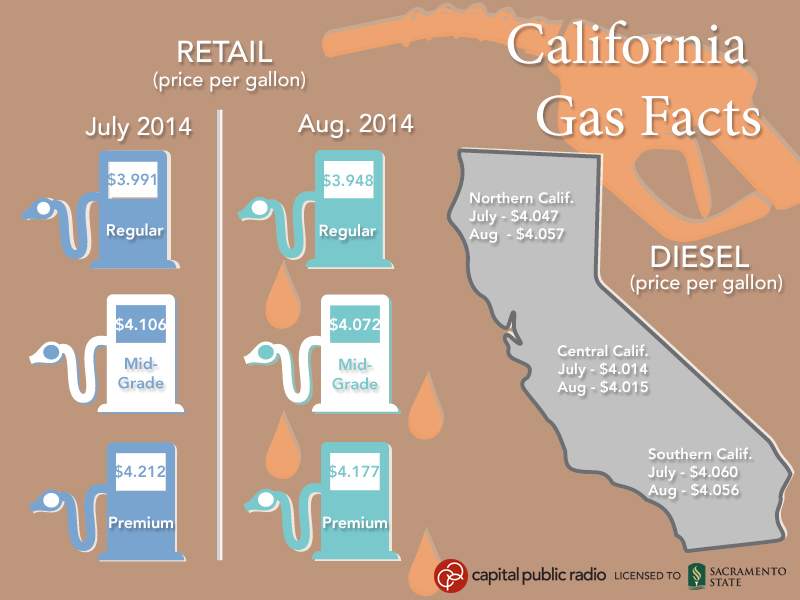 But some politicians are worried about possible spikes in gas prices. Sixteen Assembly Democrats have sent a letter to Governor Jerry Brown’s administration asking for a delay and a bill has been introduced that would postpone the change. Political consultant Mike Madrid says those politicians have good reason to be concerned. He says voters would likely blame incumbents if gas prices go up.

And California’s been though a similar political earthquake before during the state’s 2000 energy crisis.

“Good example of that would be when Gray Davis is Governor and the lights go out in California. Whether or not he was responsible f it or not is of absolutely no consequence," Madrid says. "The voters are going to want someone’s head on a platter, they’re going to get it.”

Several business groups are worried. A recent event by the National Federation of Independent Business featured small business owners such as Travis Hausauer. He runs a chain of hamburger restaurants and says his suppliers would likely pass any cost increases onto him and he’d have to pass them on to his customers.

“What’s gonna happen is we’re going to get to a point in California where we’re gonna have $20 hamburgers," he says. "People won’t be able to afford them and I won’t be able to sell them so we’ll have to close our doors.”

The Western States Petroleum Association paid for a study that found prices could rise between 14 to 69 cents a gallon. And the state’s independent Legislative Analyst’s Office says prices will likely go up 13 to 20 cents a gallon by 2020.

But Democratic Party leaders are not swayed. And in response to the letter from Assembly Democrats, the Air Resources Board points out petroleum-based transportation fuels make up almost 40 percent of California’s greenhouse gas emissions. The board says leaving them out of the program would undermine efforts to create cleaner fuels.

UC Davis’ Amy Jaffe says staying the course is the right call. Jaffe is the University’s Executive Director of Energy and Sustainability and an expert on energy policy. She doubts whether the change will actually cause gas prices to rise.

“The United States is a major exporter of gasoline and diesel fuel," she says. "And so we’re not in a situation where there’s a shortage of fuel and so the market should be able to respond.”

Jaffe’s prediction is backed up by other academic opinions that suggest gas prices could go up about ten cents a gallon, well within normal price fluctuations. And the California Air Resources Board is now saying it doesn’t anticipate any discernable rise in prices. That would be good news for drivers, and, perhaps, even better news for politicians.