The electronic-cigarette industry is heating up. Bars and shops are opening in the Sacramento area catering to people who “vape.” That’s the term used for inhaling water vapor through an e-cigarette or other personal vaporizer.

But amidst the vaping boom, regulations loom. Friday is the deadline for people to comment on a federal proposal to regulate e-cigarettes.

One of Midtown Sacramento’s most popular vape bars is located in the backroom of a restaurant. You walk past black curtains to enter.

"This is a speakeasy bar – a 1920’s theme," he says. "We want to bring smoking back indoors, but this is not smoking this is vaping.”

It looks like a regular bar here. But instead of alcohol, customers choose from an array of flavored liquids.

“You pour the e-liquid into a tank,” explains Chao. “In the tank there’s a heating element that heats up the e-liquid and produces vapor and that’s what you’re inhaling is vapor.”

Serving the e-liquid in this saloon is, not a bartender, a “vape-tender.”

“We have a flavor that is dragon fruit/strawberries and cream," says Chao. "You might like that one. It kind of reminds me of a strawberry Starburst.”

Jeff Eggink used to smoke a pack of cigarettes every two-days but switched to vaping about a year ago.

“It’s so much better; the flavor, the smell,” says Eggink. “I can hang out with a pretty girl and not have to worry about ‘you smell like cigarettes.’ That’s probably the worst thing about cigarettes is the smell.”

And Eggink, who’s in his 20s, says there were physical changes for him.

“I noticed that after about a week of vaping where I could wake up in the morning, I didn’t have that little wheeze and I could actually skateboard all day long and not have to stress about smoking," says Eggink.

Chao opened this vape bar about eight months ago.

“We have seen growth with our business,” says Chao. “At first I was thinking maybe it’s going to be 21 and over. But the age group is anywhere from 18 all the way to 50.” 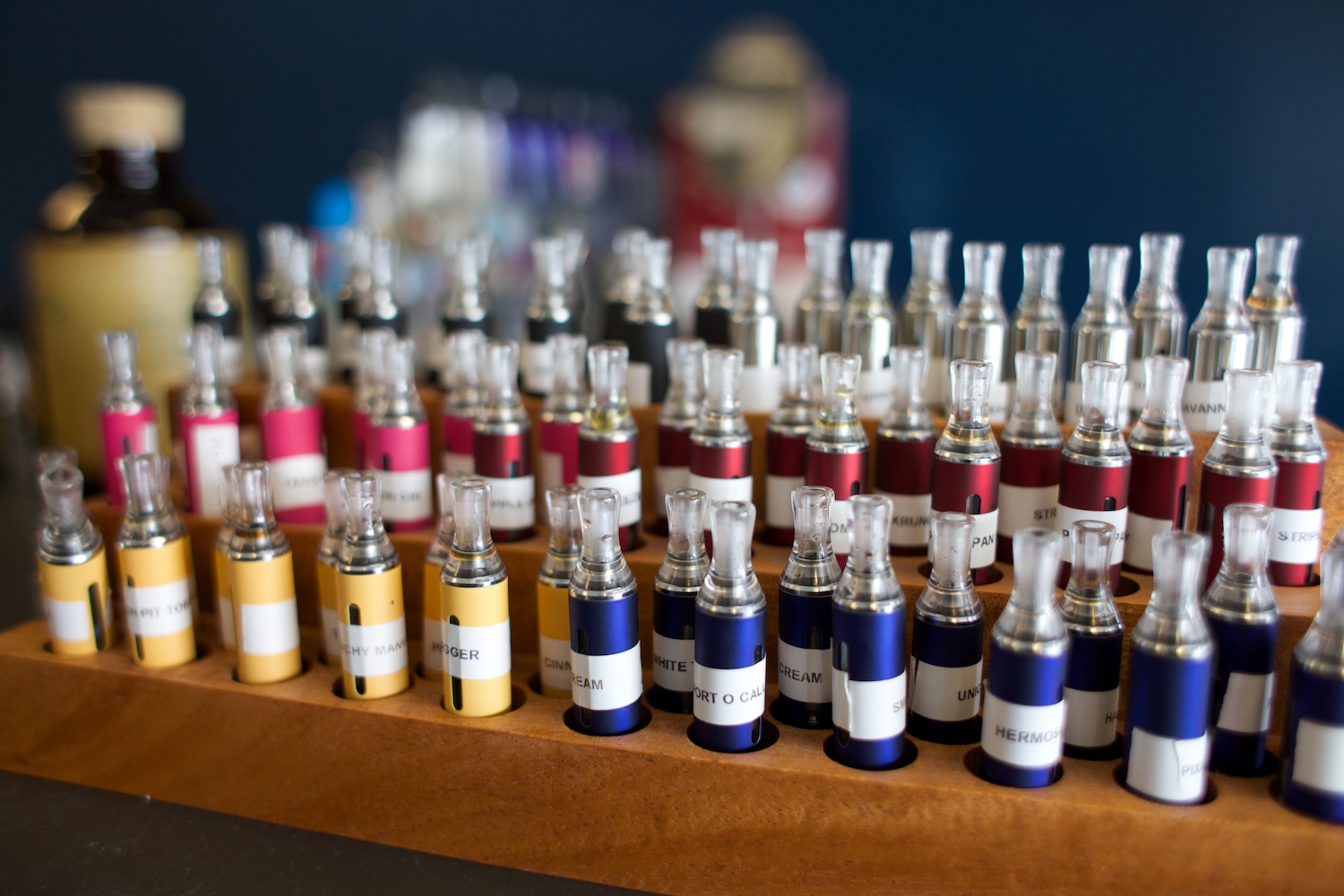 At Vaping Image, there are plenty of e-liquid flavors for customers to choose from.  Andrew Nixon / Capital Public Radio

Chao’s bar is part of a growing e-cigarette industry that will make an estimated $2 billion in global sales this year. Sacramento has about two-dozen vape businesses including a retail store along Power Inn Road called Vaping Image. Co-owner Dat Pham says his clientele is diverse too.

Pham says for many of his customers vaping is not only a way to quit smoking tobacco, it’s also a hobby: people like collecting the various vaping devices...some of them look like small light sabers used in the Star Wars films. And besides the products themselves, customers come in for the communal part of vaping.

“We like to get together, vape, talk vape, see who can blow the biggest cloud, share flavors," says Pham. 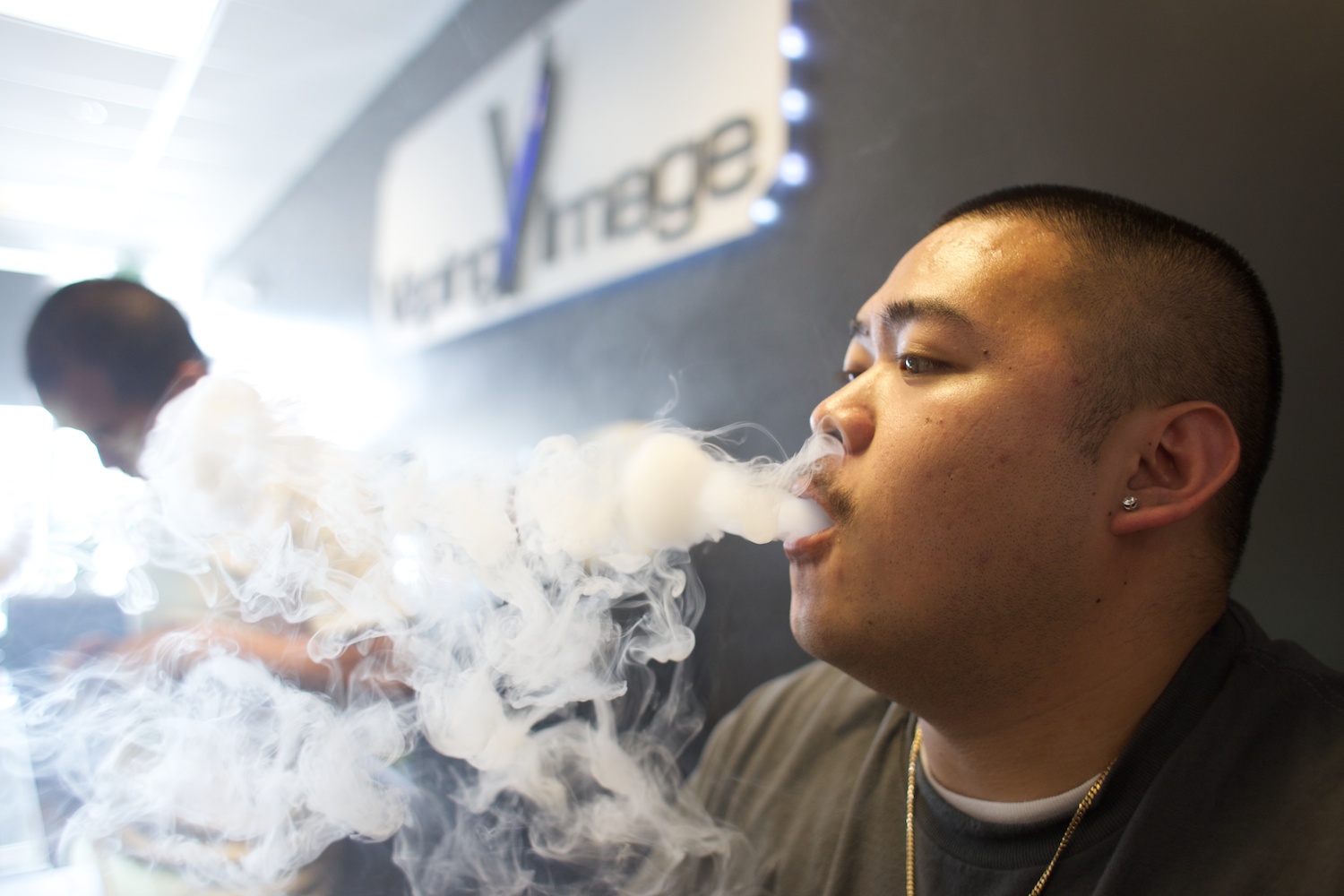 Those who vape talk about the communal aspect of it. Andrew Nixon / Capital Public Radio 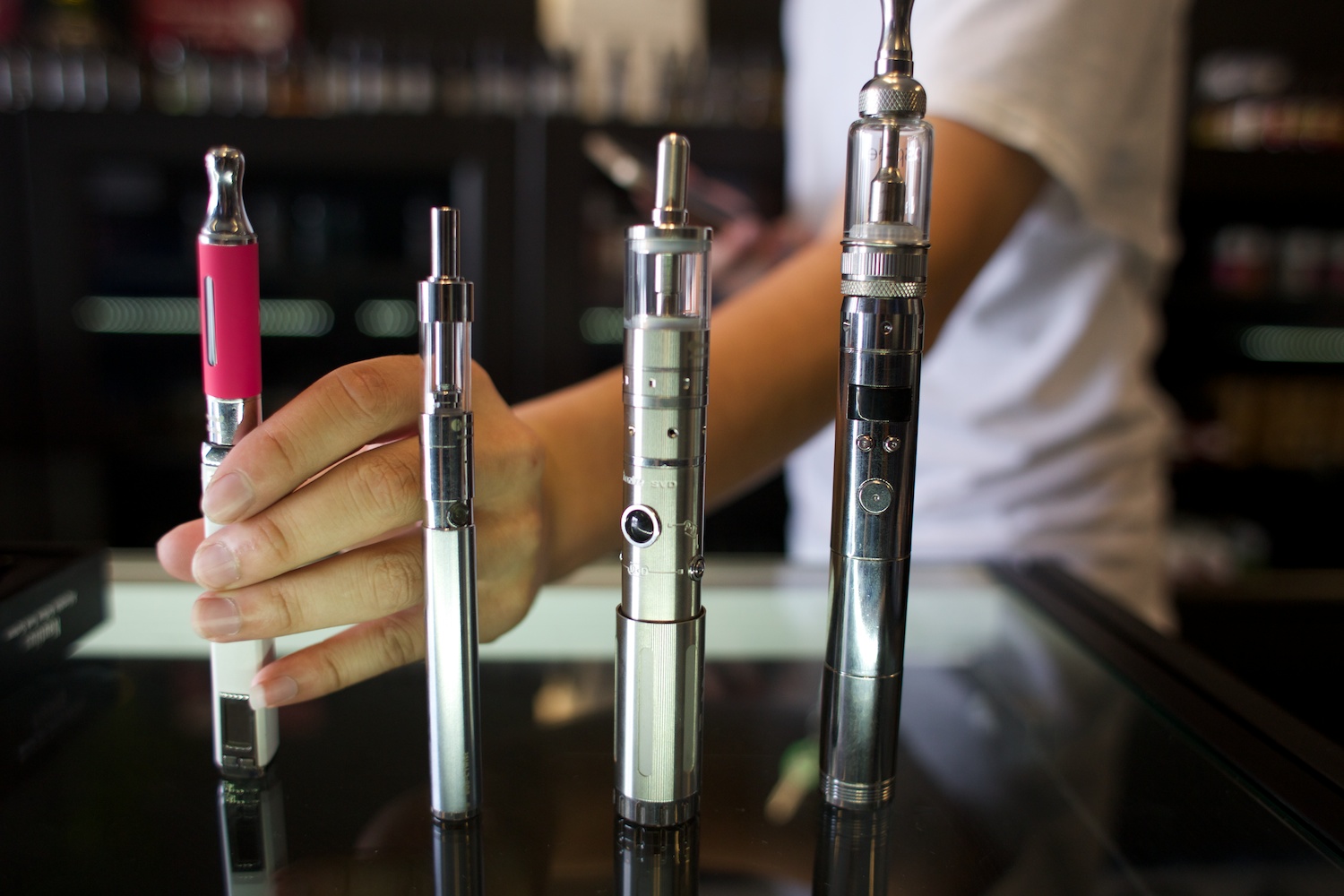 There are many kinds of vape devices -- from pens to mechanical mods, which can be customizable. Learn more about the devices here. Andrew Nixon / Capital Public Radio.

Dr. Michael Schivo of the UC Davis Health System says, “There is a sense of community around it that unless we really understand, we’re not going to know how to effectively intervene.

Schivo points out e-juices contain a mix of: nicotine, which is known to speed up the heart and be addictive, flavorings and chemicals known to be toxic in other uses.

“The other substances, propylene glycol and stuff can create toxic substances to nerves, to heart tissue and to other tissues in the body,” explains Schivo. “Unfortunately right now we know this is true but we don’t know it’s true associated with electronic cigarettes.” 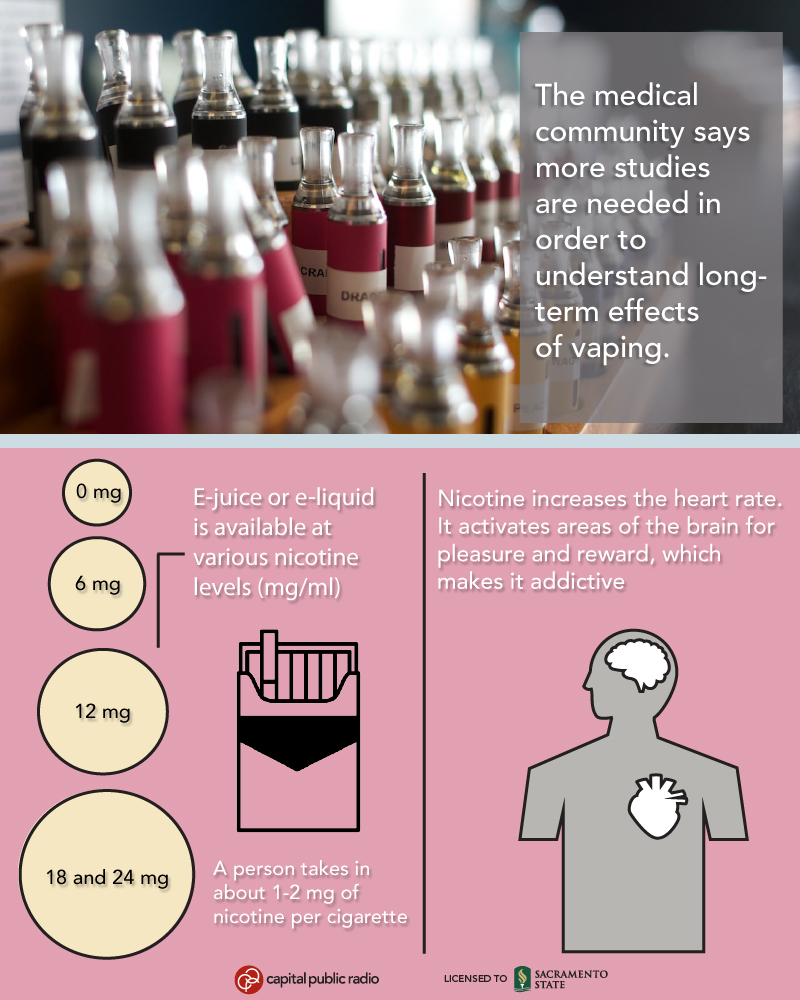 Researchers say long term studies will be needed to determine the toxicity of e-cigarettes. In the meantime, they’re looking at statistics collected at specific times. Doctor Lauren Dutra is with UC San Francisco’s “Center for Tobacco Control and Research and Education.” She looked at data from middle and high school students who completed the National Youth Tobacco Survey in 2011.

Dutra says more conclusive research on the consequences of e-cigarettes, research that could help prompt the U.S. Food and Drug Administration to regulate electronic devices, will take more time.

“Unfortunately we didn’t have data on the same people over time so we couldn’t say in the conclusion section of the paper for example ‘kids who use e-cigarettes are more likely to go on to smoke cigarettes,'"says Dutra.

Friday is the last day that people can go on the FDA’s website and comment on proposed rules banning sales of e-cigarettes to kids under 18. Leaders in the vaping business community say they have fought regulation in the past and won, they expect to win again. And many observers believe, when the FDA does issue regulations, the fight will ultimately be decided by the courts. 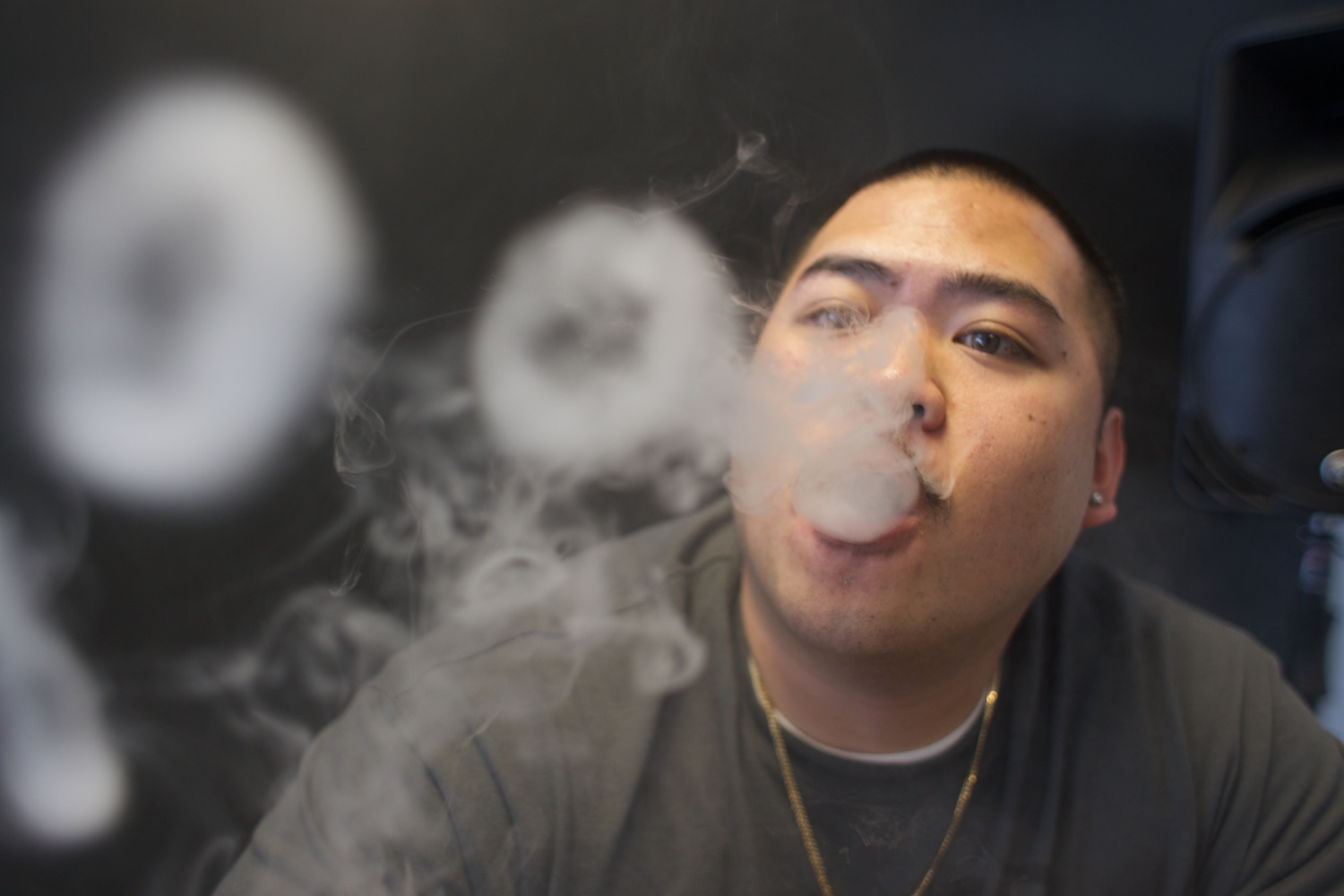 Vaping attracts a wide variety of people, from those who want to quit smoking traditional cigarettes to hobbyists. Andrew Nixon / Capital Public Radio

Various cities and counties around California have passed laws regulating e-cigarettes. Roll over the markers to learn about each city.