California’s June 3rd Primary Election is two-weeks away. One of the decisions voters will make is whether the leadership of California’s public school system should change.

The man who currently holds the post as the Superintendent of Public Instruction, and wants to keep it for another four years, is Tom Torlakson. The incumbent says under his watch, California kids are doing better in school.

“Graduation rates are at an all time high; eighth grade reading scores are going up faster than anywhere else in the country," says Torlakson. "Why take a step backwards?”

But both of Torlakson’s challengers say they could be more effective at making sure kids get all the way through school and succeed after they graduate.

One of those challengers is Marshall Tuck. He led a group of charter schools in Los Angeles. “Our students did really well and we had strong achievement results," says Tuck. "But I became more and more convinced that if we do not change the education politics in Sacramento that we’ll never be able to educate all kids in our state.”

Tuck says if elected, he’d give more control to parents and local schools. “We need to enable as much creativity and energy and innovation in our principals and teachers in local schools," says Tuck. "And that just can’t happen when you have this massive bureaucratic education code.”

The other candidate running for the post is Lydia Gutiérrez, a teacher and former aerospace administrator. Gutierrez says coming from a large family helped inspire her to run.

“I have 52 nieces and nephews," says Gutiérrez, "and the day they graduate they had no skills whatsoever and this is a real travesty.”

Gutiérrez says if she were Superintendent of Public Instruction, she’d make sure every school district had a permanent trade skill program. “Governor Brown closed down 72 vocational schools and said that you can do them in the community colleges," says Gutiérrez. "So now the day they graduate then they have to struggle to try and get in line to go to another school.”

Incumbent Tom Torlakson says he’s already doing what his challengers are talking about.

“Setting priorities at the school site," says Torlakson. "We’re getting students more prepared for careers. We used to call it Voc Ed now it’s Career Technical Education. We’ve got great momentum from the first three years I’ve been in office and we want to continue that.”

Whichever candidate receives more than 50 percent of the vote will win. Otherwise the top two finishers will compete in November. 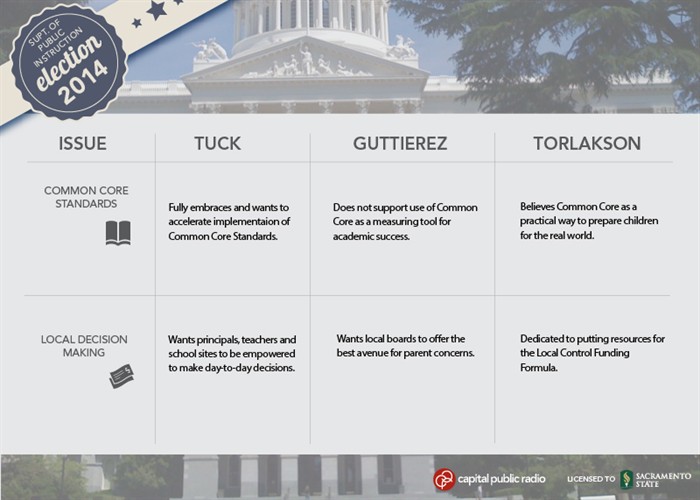