Listen
/
Update RequiredTo play audio, update browser or Flash plugin.
It's been 10 days since the slide killed at least two dozen people in the small community of Oso -about halfway between Seattle and the Canadian border.  Twenty-two people still missing.

Michael Boyle is a retired firefighter.  He is one of the people from Sacramento working with other Federal Emergency Management teams.
He says it's the largest slide he's ever seen -10 times the size of the 2005 La Conchita mudslide in Ventura County that killed 10 people.
He says crews are aggressively searching for victims in spite of the obstacles.

"The ability to move around in it was far more difficult than we expected.  There are pockets where the mud is just really thick and gooey, and it makes it really difficult to walk. It's hard in places to get the excavators -the heavy equipment- out on the debris site to start working and digging."

Boyle says finding the right tool for the job has been a continuing challenge.

"The K9s did have hits out into an area that has some pooled water in it. So, we're evaluating the depth of the water and we have had an offer from a construction company that has an excavator that floats on a barge."

Boyle says the gooey consistency of the mud has forced crews to work "outside-in" as they search for 22 missing people.

"We've made good utilization of the state highway which was buried because we know it's there and gives a good, solid road base. We have worked our way in slowly removing the dirt so that we can move our equipment in a little bit easier  and access the debris area."
He says a break from the rain and cold has lifted workers' spirits.  Counselors are  available for rescuers who might need them.

There is concern another section of the hill that collapsed could give way. Geologists have placed sensors in the area to monitor seismic activity.

Boyle says the recovery effort could last another month. 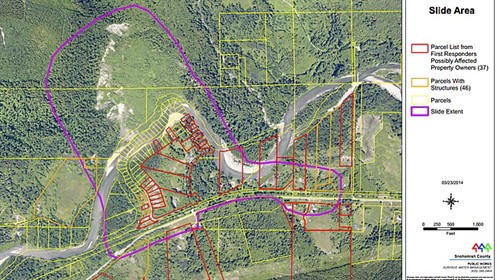