The measure would force the pharmaceutical industry to create and pay for a statewide system to safely dispose of leftover medications.

Heidi Sanborn of the California Product Stewardship Council say such a program would address the growing problems of prescription drug abuse and water contamination.

“We now have I think 303 collection locations throughout the state… operated some with volunteers, some with city staff, some water districts, some sheriff’s departments and there is no consistency.”

Sanborn says it would be more cost effective to have a standardized statewide program.

She says municipalities have been advocating for more drug waste collection sites.

Alameda County had passed an ordinance to make drug makers pay for medication disposal. Pharmaceutical companies have sued the county.

The industry says it’s not in the business of waste management, and that paying for the cost of disposal would raise drug prices.

The Pharmaceutical Research and Manufacturers of America (PhRMA) said in an e-mail statement that the legislation is "impractical with numerous unintended consequences."
"Several safe and secure ways already exist to dispose of unused medicines. In addition to an effective pharmaceutical take back program sponsored by the U.S. Drug Enforcement Administration, the state of California offers 317 facilities that accept medications for proper disposal treatment."

PhRMA says the proposed legislation would not adress the problem of pharmaceuticals in the water supply.

"Scientists generally agree that most trace amounts of medicines in water are the result of human use and not improper disposal."

The bill will be heard Wednesday in the Senate Environmental Quality Committee. 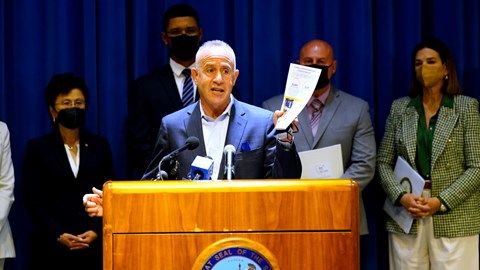