California’s flu season usually peaks around the end of January or February. But the California Department of Public Health says it’s hard to know when the illness will start tapering off.

Dr. James Watt of the Department says this year’s dominant strain is the H1N1 virus, the source of the pandemic a few years ago.

“The fact that it’s the same virus as 2009 doesn’t necessarily mean that it’s going to cause a new pandemic, but rather I would think of it as, this is just a virus that is likely to cause influenza like we see every other year.”

Watt says any influenza virus can cause serious illness. So far this year, four Californians have died. But Watt says this year’s flu vaccine is well matched to the two dominant strains going around.

California health officials say they expect the incidence of flu to soar around the state over the next few weeks.

But Watt says that’s not unusual for this time of year.

“It’s been trending steadily upward over the past couple of weeks and this is a pretty typical pattern for us, we often see our peak of influenza activity in California around January or February.” 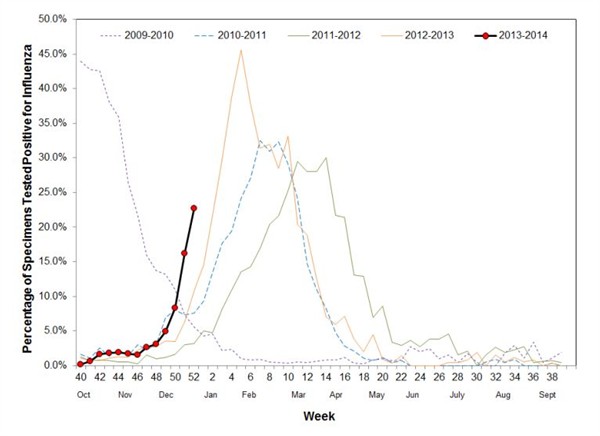 Watt says this year’s flu vaccine is well matched to the dominant flu strains that are currently circulating. It's not too late to get the flu vaccine, here's an interactive map of vaccine providers.