A gunman inside a Reno, Nevada hospital opened fire this afternoon (Tuesday), killing one person, injuring two others and then taking his own life. From Capital Public Radio in Reno, Ky Plaskon has the story.

At 2:05 p.m. police got the call of an active shooter on the third floor of the Center for Advanced Medicine - an auxiliary building from the main hospital. Police responded in force with swat, a bomb squad, and nearly 100 officers. But the incident was over. Police confirmed the deceased shooter was a man, but not the gender of the victims, if they were hospital employees, nor what kind of weapon was used. For the next two hours, many employees were in lock down as officers cleared the building of any other threats. As the employees were released many recounted a chaotic scene inside.

“There was a lot of excitement,” she says. “A lot of people running around, not knowing what was going on.”

Reno Police brought two dozen witnesses to the station for statements as they investigate a possible motive and the sequence of events. 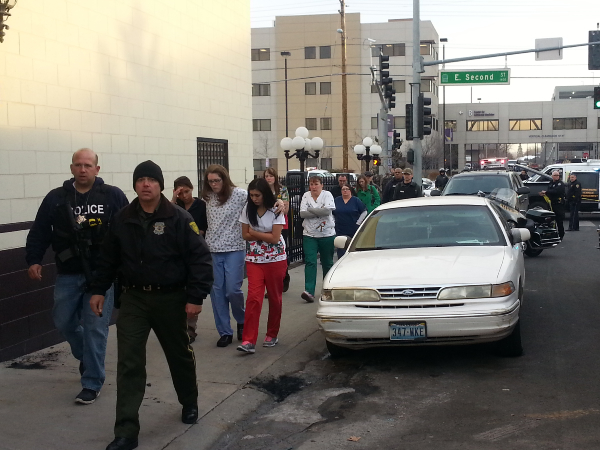 Police escort witnesses from the medical facility to city buses where they were taken to the police station. Ky Plaskon / Capital Public Radio

Reno Police Deputy Police say two people are dead, one being the gunman and two are seeking treatment after a shooting at Renown at 2:05 p.m.

Police said the active shooting scene is over, according to Capital Public Radio's Ky Plaskon.

AP -- A lone gunman shot has injured four people before killing himself at a hospital building in Reno, Nev.

Reno police say the man entered the Center for Advanced Medicine near the Renown Regional Medical Center at about 2:45 p.m. with at least one firearm and began shooting.

Reno police Lt. Tom Robinson says the shooter turned the gun on himself before 3 p.m. Robinson says one of the shooting victims is in surgery. Information isn't immediately available on the condition of the others.

Gov. Brian Sandoval said on Twitter that he and his staff were monitoring the situation and his thoughts and prayers were with those affected by the tragedy.

The Renown Medical Center is the largest hospital in northern Nevada.

Reno Police convene after a shooting on Renown medical campus. One person is dead, believed to be shooter. pic.twitter.com/E7NK2dMiJk

MORE: A lone gunman injures four people before killing himself at a hospital building in Reno, Nevada: http://t.co/QqQeeKTcy8

Description of video provides new details on shooting at Renown in Reno: http://t.co/TU5yudStDf