More than 12,400 properties received a foreclosure notice of some kind in November, down 60% from a year ago, continuing a downward trend.

"The foreclosure numbers in California have now been down for 24 consecutive months."

Daren Blomquist is RealtyTrac's vice-president. Blomquist points out that after years of leading the country in foreclosures, California is now out of the top ten, in 13th place. But he says, with more than 12,000 foreclosure filings last month, we're still not back to normal.

"In 2005 and 2006 before the housing bubble burst we were seeing an average of about 6,600 properties with foreclosure filings and so we're about twice that."

Blomquist says California's 11-month old Homeowner Bill of Rights has helped lower foreclosure rates. But he predicts that once lenders finally adjust to the law, California will see a moderate increase in foreclosure activity as soon as early next year.

Meanwhile, just over 950 Sacramento area properties received foreclosure filings in November, down more than 60% from November of last year.

Sacramento's foreclosure rate is still slightly above the national average. But RealtyTrac says the region's foreclosure activity ranked 63rd among metro areas nationwide. Blomquist says a few years back, it was a different story.

Foreclosure activity for Sacramento County compared to California and the U.S. 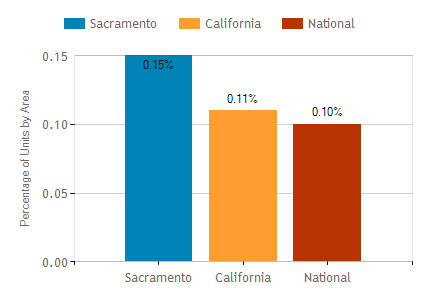 "Previously in 2009-2010, was consistently ranking in the top 10 or top 20 metro foreclosure rates. The concern with Sacramento and other inland areas is the higher number of underwater borrowers that we still see there."

Blomquist says 30% of Sacramento region homeowners are "underwater" compared to only 7% in the San Francisco area, according to third-quarter data.

"Underwater" means a homeowner owes at least 25% more than their property is worth.

In the Stockton metro area, there were a little more than 300 properties with foreclosure filings in November, down 65% from a year ago. Stockton's foreclosure rate ranked 39 among metro areas nationwide.

Nevada no longer leads the nation in home foreclosures. In fact, the state has slipped down to the 8th highest foreclosure rate in the country, according to RealtyTrac.

"Nevada is really going on a roller coaster ride due to legislation that's being passed there."

Blomquist says Nevada's foreclosures have dropped because of a state law that took effect in October called the Homeowner Bill of Rights.

"In November there were only about 1,300 properties with foreclosure filings statewide. That was down 53%, in one month and year-over-year it was down 55%."

Blomquist says right before that legislation took effect, there was a big spike in activity as lenders tried to process as many foreclosures as they could before the law kicked-in. Now, he says, lenders are adjusting their operating procedures to match the new law.