Diane Shore of Mill Valley is one of a small group of Americans who received a letter that their health policy will be canceled.

The letter from Blue Shield of California suggested a new Blue Shield plan with a small premium increase.

But she’s not pleased.

“My physicians will no longer be in this network of physicians, or the hospitals won’t be as well,” says Shore.

If Shore chooses that Blue Shield plan, the doctors and hospitals available to her will be limited to certain geographic areas, like Marin County where she lives.

Shore battled breast cancer in 1998, and says she wants to stick with the  same providers she's been seeing since then. 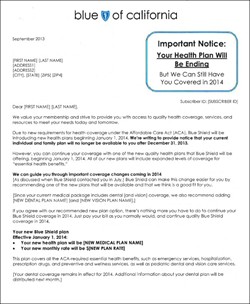 So Shore says she’s looking at other options. And she’s fortunate enough to have help from an insurance broker as she shops for a new plan.

The health plan suggested to Diane Shore was a Blue Shield EPO plan. EPO stands for 'exclusive provider organization.'
Blue Shield of California says it is offering these plans for the first time next year to keep health plans affordable for buyers on the individual market.

Blue Shield EPOs are being offered in four regions in 2014: a swath of counties in Northern California, spanning an area from the Oregon border to Tuolumne County; a second region includes Marin and surrounding counties to the northeast. The other areas include Alameda county and the Monterey region.

People in a Blue Shield EPO plan in these counties are restricted to doctors and hospitals in their areas.
They will not be able to get insurance coverage for a provider in San Francisco or Los Angeles, unless it is an emergency service or Blue Shield authorizes the care as a "necessary" service not available in the EPO area.
Anthem Blue Cross is also offering EPOs in some regions next year, including San Francisco, Los Angeles and San Diego.

San Francisco based insurance broker Susan Shargel says she’s trying to sort out all the new ways insurers are contracting with doctors.

“It’s enough to give you a migraine, truly,” says Shargel. 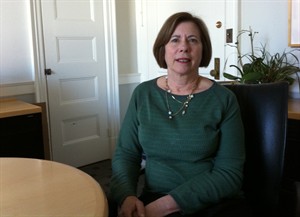 Some Health Plans Will Have Fewer Providers

California health insurers say some health plans will also have fewer doctors and hospitals than they had this year.
Blue Shield of California, for example, says it will have 50% the doctors and 75% of the hospitals next year than it has in its individual health plan network this year.

Shargel says the changes are not clear in the cancellation letters.

“There isn’t something that says 'Alert! Be aware! Take action now to be sure this works for you...There needs to be a red alert.”

Health insurers say, it’s true, some plans will have fewer provider options next year. It’s happening on and off the exchanges.

Patrick Johnston is from the California Association of Health Plans.

He says the Affordable Care Act requires greater benefits to consumers in terms of coverage and out of pocket expenses, so one of the few cost variables to work with is doctor contracts.

“What’s left to control costs is the network, and in areas where there are a lot of hospitals, some more expensive than others, and a lot of doctors, it’s only natural that a health plan will sign up some, but maybe not all,” says Johnston.

So Johnston says if you’re buying your own insurance next year and want to keep your doctors, you may have to shop around.

“Transitioning might mean looking or having difficulty signing up for exactly the same doctors. But the benefits are rather enormous,” he says.

Jerry Kominski is with the UCLA Center for Health Policy Research.He says insurers are negotiating for their bottom line. 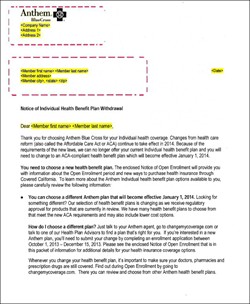 "We’re willing to pay you $50 a visit, just for example. If you’re not willing to do that, we know a doctor’s group across the street that will accept that."

Kominski says the trend of narrowing provider networks to keep costs down is not new. But it’s been accelerating under the Affordable Care Act. It happens in group health plans too.

"What we have done in the last 30 years in the United States is move more and more towards a market-oriented healthcare system. And markets depend on price competition."

He says the jury is still out on whether limiting doctors in health insurance will affect quality of care. But he says there’s no question if affects choice.

"So if we want to keep healthcare from becoming completely unaffordable for everyone, at some point something has to give. And in this case what’s giving is the ability to choose any doctor in any hospital."

Kominski and health insurers say some plans may have a wide variety of doctors and hospitals, but you can expect to pay more for that choice.