The most recent adventure in our series Day Tripping sent Bob Moffitt and photographer Andrew Nixon down a path they had not expected.  They hit the Sacramento River looking for salmon with a backpack full of breakfast bars and bananas -not knowing they were risking the ire of the fishing gods.

There’s something about getting up hours before sunrise for the chance to outsmart an animal that has never told you what it likes or where it will be.

I hope the song "Had a Bad Day" coming out of the alarm clock isn’t an omen.

After breakfast, we throw some power bars and bananas in a bag and hit the road. At five, we meet our guide -Big John Enos- for whom early wake up calls are always good.

"You get up every morning, you read the obituaries," he says.  "If your name isn't in there, you go fishing."

Big John is in his 50’s and his nickname fits –he’s stocky and has fingers like sausages.  He was a meat cutter for 30 years.  But, steaks and chops weren’t his passion.  Salmon and striped bass were.  In ten years, he saved $40,000, bought a boat, and opened his own guide service.

Big John, Andrew and I drive to Butte City on the Sacramento River.  At the boat ramp we meet Marty Beaver and Jim Gallegos. They’ll be fishing too.

As Big John lowers the boat trailer for launch, the fish stories start.  Marty’s a lawyer from Grass Valley.  The first fish he hooked was also the first to get away.

"My dad was about 50-yards down the bank from me and I didn't know what to do when I hooked it and I took off running with the rod," he laughs.  "By the time I got there, he was off the hook."

Jim is retired and lives in Manteca.  He hires Big John a few times a year.  "Salmon fishing -he's a good guide. We usually do pretty good."

As Big John shouts, "Hang on to your wigs and your hats.  Here we go!" we launch and begin the trip half-an-hour upstream.

Once there, Big John rigs up a combination of lures called, “Cling Ons” that he claims to have invented. With a piece of sardine wrapped around one half of the Cling On and a four-ounce lead ball rigged to bounce on the bottom of the river, Big John gives final instructions for handling the rods. 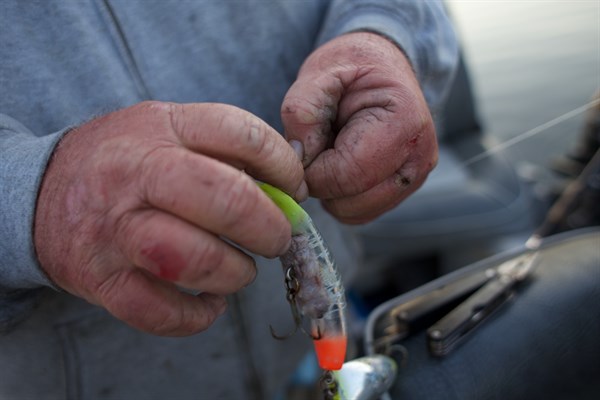 We’re ready to fish.  As we head to the first fishing hole, Big John says something that would have been good to know when I was packing snacks.

"If we don't get a fish on the first pass, then I know one of these guys or you guys brought bananas on the boat.  That's how my confidence is in here.  You're lucky I didn't strip search you before you got in the boat."

I chalk it up to superstition but Marty and Jim swear it’s true.

"My buddy ain't never been salmon fishing before and he came up and got his first salmon. We videoed it. Looked like he was fighting a marlin. He was down deep in there," Jim laughs. "He was having a blast. My other cousin made the mistake. He had a banana that morning. He didn't catch no fish that day."

For two hours, the only thing we catch is each other.  Tangled lines, lost lures, but no bites.  Big John is not happy, but tries to stay positive.

"Even the best of the best have bad days too, you know. It happens," he says.  "That’s why they call it fishing”

Those bananas weigh heavy on my conscience.  When we stop for Big John to change lures, I sneak off and bury two nice, firm, slightly-green bananas.

And things do improve -fewer tangles, a recovered 20-dollar Cling On, but only one bite.  Big John is taking this pretty hard and after another hour, I finally confess.

"Last time we stopped, I took the two bananas I had in my backpack and I took em out and buried them," I say.

Big John asks Jim and Marty, "Do you guys want to throw him out of the boat or do I have to?"

I plead ignorance.  They let me stay.   And with the help of the depth gauge on the fish finder, I’m learning to keep the sinker bouncing off the bottom of the river.  Almost exactly two hours after I bury those bananas, something hits my Cling On.

“ Don’t reel in if he’s tugging line" says Big John as he grabs the net.  "Go over my head." The salmon splashes as it comes out of the water and into the net.  A fishermen on a neighboring boats lets out a, "Whoooo."  Big John hollers, "Finally! Goll dang! “ 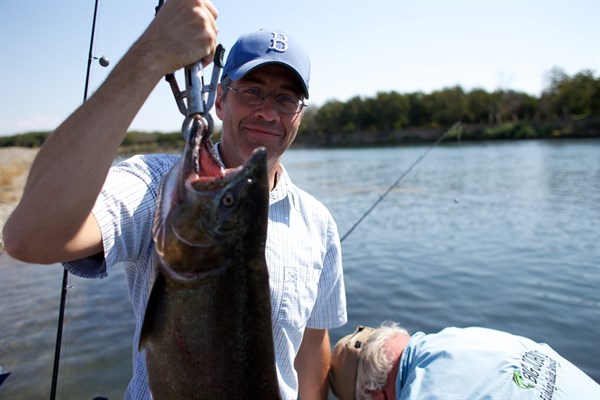 The salmon is about three-feet-long and weighs 18 pounds.  I’m not sure who’s happier, me or Big John.

"Should be all downhill now that Mr. Banana Man got the hex off of us," he says.

But, by the time he cleans the fish, it’s noon, it’s hot and time to call it a day. Jim and Marty don’t seem to mind even before Big John tells them they’ll get a discount on their next trip due to the banana contamination on this one.

Big John guides on the Feather and Sacramento Rivers from April to December and on local lakes during the winter.  All he asks is that you call ahead at least 72 hours in advance… and that you abstain from bananas for at least 24 hours…if not much, much longer. 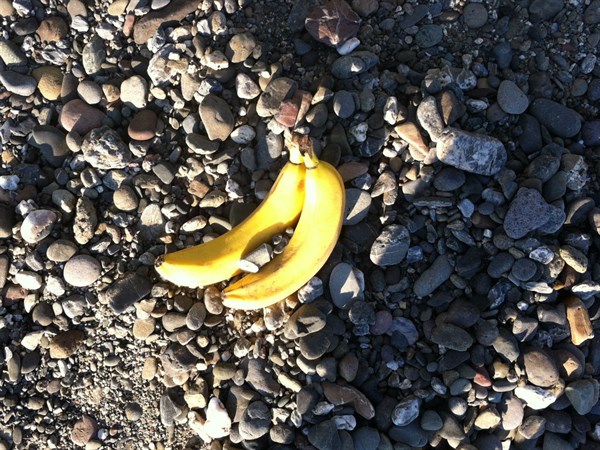