The Evolution of Jerry Brown

“Here comes this young guy whose father had been governor who was campaigning on how money and influence had usurped the process,” remembers Rusty Areias, a longtime friend of the governor’s who’s now a Sacramento lobbyist.  “And there was a lot of resentment toward Jerry – because of his age, because what they viewed as a lack of preparedness.”

Many Californians loved Pat Brown.  And lawmakers pushing for infrastructure spending expected Jerry to reverse the conservative fiscal policies of predecessor Ronald Reagan.  But Brown surprised a lot of people by campaigning on political reform and taking a “small is beautiful” approach to government.  He was considered enigmatic. 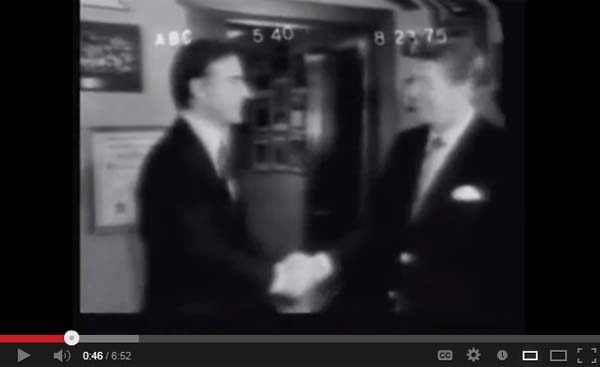 "Brown’s father was governor of California, but not many know what kind of governor his son is going to turn out to be.” - Dick Shoemaker, ABC News

“What kind of person I am, what kind of a person are you?  Knowing yourself is a task for life, and I am trying to call people’s attention to the realities and wake ’em up before it’s too late.  And if that’s an enigma, so be it.” - Jerry Brown, during 1975 ABC interview

Brown had a number of victories.  He signed legislation that allowed collective bargaining for public employees.  He enforced Proposition 13 after voters approved it over his objections.  And he appointed women and minorities to high-profile positions.

But lawmakers overrode gubernatorial vetoes three times – something they rarely did before and haven’t done since.  And Brown spent much of his time running for president – twice.

Fast-forward to 2011.  Jerry Brown was sworn back in to the governor’s office at age 72…

“That I take this obligation freely…” - Brown taking the oath of office on January 3, 2011

“…without any (pause) mental reservation…” - Brown

And he’s gotten most of what he’s asked for this time: frugal budgets from legislative Democrats and tax hikes from voters – not to mention, overhauls of the state’s pension and school funding systems.  California may still have hundreds of billions of dollars of long-term debt, but the state’s $27 billion budget deficit is gone – at least for now.

And former Democratic Senate Leader David Roberti suggests there are three main reasons why: “Number one, he’s not running for any national office.  Number two, Jerry was not quite the pragmatist then that he is now.  And he hadn’t any experience in local government then that he has now.”

In between his two stints as governor, Brown spent eight years as mayor of Oakland.  Former Republican lawmaker Bill Leonard says that gave him a new perspective.

“It seemed to me he learned a lot about how the executive branch gets things done – or not – that he hadn’t really learned as governor the first time, and he had to really confront problems at literally the street level that governors don’t necessarily see,” Leonard says.

Brown tells Capital Public Radio his 40 years of experience help him “separate the wheat from the chaff.”

“Well, yeah, I do see government differently,” Brown says.  “So having seen through the camouflage of rather grandiose, nice-sounding claims and phrases in politics, I have a more penetrating gaze when people say – well, sign this bill or don’t do this or that.”

Not Everyone a Fan

But some people are disappointed with the Brown of today.  Sierra Club Director Kathryn Phillips first met Brown as a young reporter decades ago.  She says the governor spends less time now challenging the status quo and more time cultivating big business.

“I wish he listened more.  I wish he was a little bit more in touch with the public and Californians and what they think about the environment, and less beholden to some of the special interests,” Phillips says.

By most accounts, Brown is a more focused governor this time around.  Sacramento lawyer Gene Livingston held two top posts in Brown’s first administration.  He says back then, the governor tried to address lots of different issues at once.  Now, he picks a few priorities – and sticks to them.

“And rather than delegate and depend on other people in his administration to implement that, he is staying very much involved personally,” Livingston says.

Brown says a $27 billion deficit has a way of grabbing one’s attention.  “I would say, by the nature of things, the problems are greater, they’re more specific and therefore I find it much easier to array priorities than when I was governor the last time,” he says.

Jerry Brown has long shown the ability to surprise, evolve and even exasperate. That seems to suit many Californians.  Polls and fundraising totals suggest he’s a heavy favorite to win a record fourth term next year.

Revisit our profile of Jerry Brown from 2010