The American Fire is burning 8 miles south of I-80 near the sierra crest at Emmigrant Gap. Winds that align with the topography are pushing the fire uphill. It is just a half mile from the American River. If the fire crosses the river, it could climb the other side of the steep canyon.

Fly along with the 146th Airlift Wing during a fire retardant drop Saturday afternoon:

Fire Information Officer Mike Johnson says conditions that prompted a Red Flag warning will be in effect through wednesday.

“We may get some rain that may or may not help us, and we may also get some thunderstorms that move through the area that don’t produce rain but may produce gusty erratic winds and maybe even some new lightning strikes” - Mike Johnson, Fire Information Officer

If there is rain there could be flooding. A Type 1 National Incident Command Team has taken over because of the fire’s complexity, growth, duration and the abundance of fuel.

The community of Big Oak Flat, which includes 6 homes is under voluntary evacuation orders.

Firefighters will hold an update meeting on the fire at 7 p.m. today at the Foresthill Veteran’s Memorial Hall.

The American Fire is burning in heavy fuels on extreme slopes about 10 air miles northeast of the community of Foresthill, and eight air miles south of Interstate 80.

The public is invited to an American Fire update meeting at the Foresthill Veteran's Memorial Hall at 24601 Harrison Street in Foresthill beginning at 7 p.m. tonight.

The National Weather Service has issued a Red Flag Warning for the fire area beginning at 11 a.m. today and extending through 11 p.m. Wednesday. This Warning is due to the threat of abundant lightning and gusty, erratic outflow winds. Significant rainfall and flooding in and around the fire is also possible over the next three days.

Firefighters continue to be concerned about dry fuels that have not seen fire in over a century, as well as any winds over 5 mph and rolling burning debris, all of which could cause a rapid spread of the fire.

On the northeast corner a spot fire was quickly contained by firefighters as they made good progress with hand lines and dozer lines. Along the eastern portion of the fire last night, firefighters conducted a firing operation, meaning they used fire to reduce unburned fuel between the fire line and the main fire.

The center portion of the east flank was still very active during the day, but indirect containment lines remained secure. On the extreme south end, firefighters will begin building a very steep hand line today, which descends to the river. The west side of the fire was relatively inactive.

Mop-up is occurring in this area, which involves checking the interior of the fire to ensure no hot spots remain that may threaten the containment lines.

The Robinson Flat Campground is closed. The Tahoe National Forest has issued a voluntary evacuation notice for Big Oak Flat located near the south end of the fire. Forest Road 43 (Robinson Flat Road) is closed at its intersection with Forest Road 96 (Mosquito Ridge Road).

An emergency closure order is in place for portions of National Forest System lands within and adjacent to the American Fire. A map and description of the closed area can be obtained at Tahoe National Forest offices as well as online at http://www.fs.usda.gov/tahoe. Portions of the Foresthill Divide road are closed.

At 6 a.m. today, management of the fire was transferred to the California Interagency Management Team 4.

Firefighter and public safety are the highest priority. 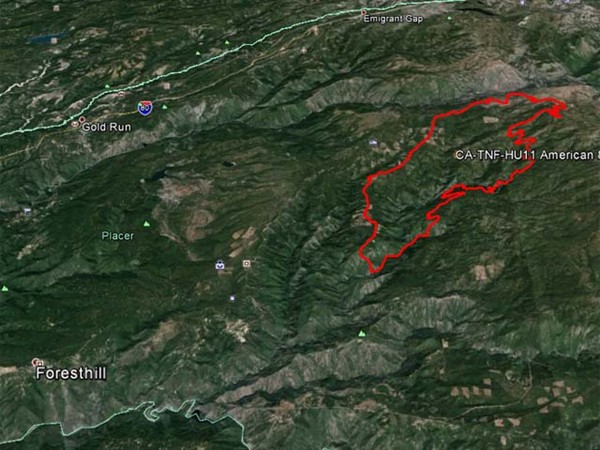