A federal safety official says the cockpit voice recorder from Asiana Flight 214 showed the jetliner received a warning that it could stall and tried to increase its speed before it crashed.

National Transportation Safety Board chief Deborah Hersman says at a news conference Sunday the recorder showed the crew called to abort the landing about 1.5 seconds before the crash.

The recorder also showed there was a call to increase airspeed roughly 7 seconds before impact.

Before that, she says, there was no indication in the recordings that the aircraft was having any problems. It was carrying 307 people when it crashed Saturday, killing two passengers and injuring dozens of other people.

NTSB Findings On SF Plane Crash At A Glance 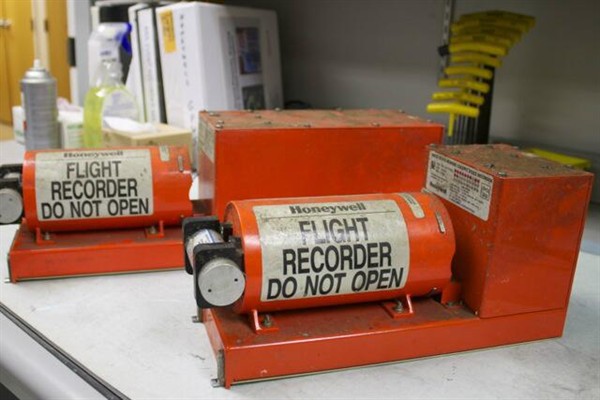 A man who walked out of the back of the jetliner that crashed in San Francisco says he saw the runway from a gaping hole in the back of the plane where the aircraft's kitchen used to be.

Shi Da, a product manager at an Internet company, says he, his wife and teenage son were sitting near the back of Asiana Airlines Flight 241 when it crashed while landing Saturday. The family escaped with cuts and neck and back pain.

Through the dust Da says he could see the ground through the plane's missing tail and galley. He led his family through the hole and they spent the next half-hour on the tarmac watching the plane burn.

Da says he feels lucky they were sitting where they were.

A doctor at San Francisco General Hospital says at least two people are paralyzed. Investigators are trying to determine whether two 16-year-old girls whose bodies were found on either side of the plane were alive or dead when rescuers reached the scene. 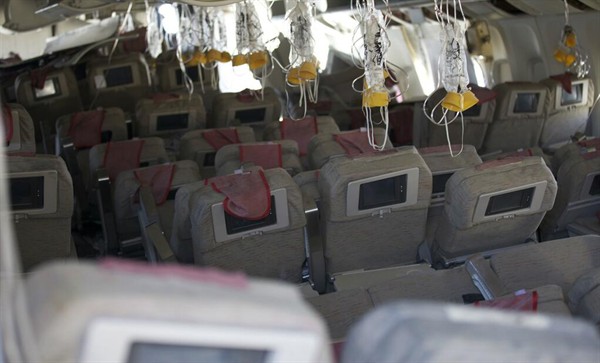 An investigation has begun into Saturday's crash-landing of a South Korean airliner at San Francisco's airport, which left two passengers dead and dozens more injured. Two 16-year-old girls from China were killed, the airline says.

As it came in for landing before noon Saturday, the plane's tail section snapped off after it struck the ground short of the runway, according to multiple witness accounts. The jetliner then twisted and slid down the tarmac. After the plane's inflatable emergency escape ramps deployed, many passengers slid to safety.

As it sat on the runway, the aircraft sent billows of smoke into the sky. Images taken later showed a large portion of the 777's roof had burned away.

"Based on numbers provided by the San Francisco Fire Dept. and regional hospital officials, two people died and 182 others were taken to hospitals," the local CBS News affiliate reports, "including 49 who were seriously injured, ten of them critically including two small children."

Asiana and government officials have identified students Ye Mengyuan and Wang Linjia as the two girls killed Saturday. They were part of a large group of students and teachers who were heading to the United States for a summer camp, reports the South China Morning Post.

All 307 people aboard the plane have now been accounted for, officials say, and investigators began their work on the scene before midnight Saturday. The National Transportation Safety Board and the Federal Aviation Administration each say that they're sending investigators to San Francisco.

The incident triggered delays and rerouting of dozens of other flights, as jets were sent to airports in Oakland, Los Angeles, and elsewhere to absorb the flow of travelers. As of early Sunday, two runways at the airport remain closed, reports the local ABC 7 News.

One person who saw the plane from the ground was Stephanie Turner, a visitor to California who was taking a photo of the runway when saw the Asiana 777 descending.

"And then I noticed that the tail was very, very low. The angle was bad. And so as it came in, the tail of the plane struck first," she told NPR Saturday.

Among the passengers was Samsung executive David Eun, who tweeted "I just crash landed at SFO. Tail ripped off. Most everyone seems fine. I'm ok. Surreal..." Eun also posted a photo of the jet.

We'll be following developments today, and updating this post as they come in.

With all those aboard accounted for, transportation officials are now turning their focus to finding the cause of the disastrous landing, the first time a Boeing 777 has been involved in a crash with fatalities in its 18 years of service, ABC reports.

The chief executive of Asiana Airlines says that the flight's pilots were well-trained and had thousands of hours of experience. He also said there were no issues with the plane.

"For now, we acknowledge that there were no problems caused by the 777-200 plane or (its) engines," airline president and CEO Yoon Young-doo said at a news conference Sunday, Reuters reports.

The news agency also reports that parts of the San Francisco airport's landing systems, designed to help pilots make perfect descents onto runways, had been turned off on the runway that was the scene of Saturday's crash-landing.

The system is seen as an aid to pilots, rather than an essential guide — particularly during clear conditions such as those reported Saturday.

Saturday, officials from the FBI said that they saw no signs that the crash-landing was related to terrorism. 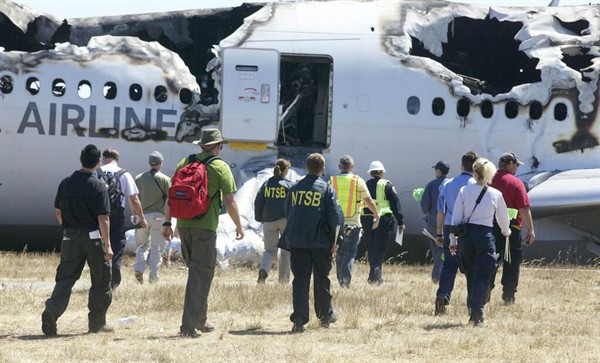 Chinese state media have identified the two people who died in a plane crash at San Francisco International Airport.

China Central Television said Sunday evening that the two 16-year-old girls were students at a middle school in eastern China. It cited a fax from Asiana Airlines, which operated the plane that crashed, to the city government where the school is located.

Of the 291 passengers on board, 141 were Chinese. At least 70 Chinese students and teachers were on the plane heading to summer camps, according to education authorities in China.
South Korea says two veteran pilots were flying the Asiana Airlines jetliner when it crashed while landing at San Francisco's airport, killing two people.

The Ministry of Land, Infrastructure and Transport says four pilots were aboard and rotated in two-person shifts during the flight from Asia.

Officials say more than 300 passengers and crew members were aboard when it slammed into the runway and caught fire. The two dead were found outside the wreckage. Another 182 people were taken to hospitals, many with minor injuries.

San Francisco's fire chief says authorities have accounted for all passengers and crew members who were aboard the jetliner.

National Transportation Safety Board investigators are on the scene.

At least 70 Chinese students and teachers were on the flight en route to summer camps, the Associated Press is reporting.

The crash happened around 11:30 a.m. local time (2:30 p.m. ET) Saturday. We're following the news as it comes in and have been posting updates.