San Francisco's fire chief says the two people who died in the Asiana airlines crash were found outside of the heavily damaged jetliner.

Fire Chief Joanne Hayes-White said late Saturday that she did not know the ages or genders of the victims.

Asiana Flight 214 from Seoul had more than 300 passengers and crew members aboard when it made a hard landing, lost the tail and caught on fire at San Francisco International Airport on Saturday morning.

More than 180 people were taken to nine area hospitals, but the majority had relatively minor injuries. As of Saturday evening the number of fatalities stood at two while at least five people were reported in critical condition.

One of the survivors of the crash said there was no warning before the plane touched down hard.

Vedpal Singh, his arm in a sling, said at the airport on Saturday that he heard a loud sound after the plane touched down and knew something was horribly wrong.

He said the plane then went silent before people tried to get out anyway they could. The entire incident lasted about 10 seconds.

Singh was visibly shaken. He was traveling with his wife and at least one child from South Korea, where he works, and said he was in the middle of the aircraft.

He said it was "miraculous" that he survived.

More than 425 flights had been canceled at SFO as of 10:55 p.m ET, according flight-tracking firm FlightAware.

Fire Chief Joanne Hayes-White said in another news conference that everyone has been accounted for, and the death toll from the accident remains at two.

San Francisco Mayor Edwin Lee noted the "tremendous city response" to the crash, including translators dispatched from various organizations to assist the passengers and grief counselors from the health department who made themselves available on the site.

123 who did not need to be transported, remaining in the terminals 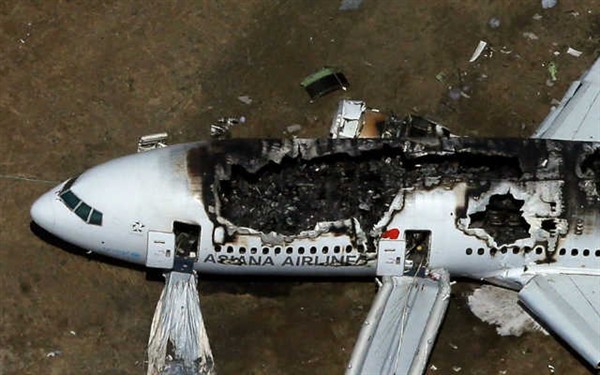 Officials at SFO gave a brief update regarding the status of those who were on board flight 214 when it crashed:

181 out of the 307 people on board the flight were transported to local hospitals.

An additional 132 were later also transported after being triaged.

123 people were uninjured and accounted for in the terminal.

That leaves one person who is unaccounted for.

Limited departures and arrivals have resumed on 2 of SFO's 4 runways.  Officials recommend for any passengers traveling through SFO to check with their airline before coming to the airport. 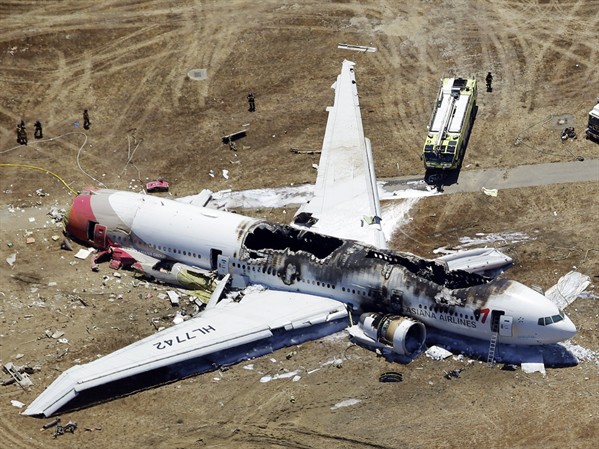 At a 4 p.m. news conference, San Francisco Fire Chief Joanne Hayes-White said there were 291 passengers and 16 crew members aboard the plane.

She said 48 people were transported to local hospitals.

One-hundred ninety people were taken to a "safety zone" at the airport.

Eighty-two of those people have been or are being transported to hospitals.

Hayes-White confirmed that there have been two casualites.

Dave Johnson, FBI Special Agent in charge, added at the press conference that  “at this time there is no indication of terrorism involved."

Click the "Listen Now" button above to hear the entire press conference.

About an hour before the San Francisco update, Chairwoman Deborah Hersman gave an  update from the National Transportation Safety Board  regarding the Asiana crash.  Listen to it here.

Here are some photos from an extensive slideshow compiled by mercurynews.com (John Green/Bay Area News Group) 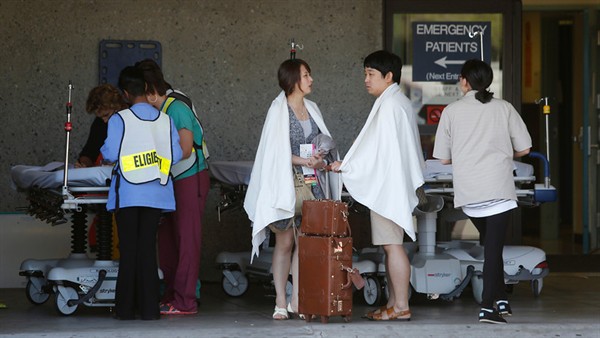 San Francisco General Hospital spokeswoman Rachel Kagan told KCBS that 10 passengers from the jetliner had been transported to the hospital.

She said the hospital received two children and eight adults, all in critical condition. She said tents were being set up outside the hospital for triage.

A video clip posted to Youtube shows smoke coming from a silver-colored jet on the tarmac. Passengers could be seen jumping down the inflatable emergency slides.

FAA spokeswoman Laura Brown said the Boeing 777 was supposed to land on runway 28 left at the airport. She said the sequence of events was still unclear, but it appeared the plane landed and then crashed.

The airline is based in Seoul, South Korea. Its website says its Boeing 777 can carry between 246 to 300 passengers.

San Francisco International Airport is closed and flights are being diverted to other airports.

The National Transportation Safety Board says it's sending a team of investigators to San Francisco to probe the crash of an Asiana airliner.

The Sacramento Bee reports that SF 16 flights have been diverted to Sacramento. Read more.

307 on board
2 fatalities
181 transported to hospitals (49 immediately for serious injuries, 132 sent later)
123 who did not need to be transported, remaining in the terminals

The fire chief said there were 307 people on the plane, and that about 60 are still unaccounted for. She also said there are two confirmed fatalities, but that all numbers remain "fluid."

At the same news conference, David J. Johnson, FBI special agent in charge of the San Francisco Division, said there was "no indication of terrorism involved." He said the FBI would continue working with the NTSB on the investigation.

Krista Seiden, 26, saw the Asiana plane on the runway as she was boarding her own flight to Phoenix. The daughter of a pilot and a flight attendant, Seiden told NPR she knew it was a crash immediately: "There's really no mistaking a big commercial airliner sitting on the runway and billowing clouds of smoke."

She said she saw the plane skidding along the runway, fuming with black smoke. Though they couldn't hear the crash from inside the terminal, as soon as passengers saw wreckage "there was just a lot of uncertainty and commotion."

Mills-Peninsula Hospital reports having five people who were injured in the crash, but spokeswoman Margie O'Clair said "more are expected" and had no information on the patients' condition.

San Francisco General Hospital says it has 10 patients from the accident, eight adults and two children. "All patients are in critical condition," according to a statement from the hospital's communications officer, Rachael Kagan.

As we noted in an earlier update, the airline said 291 passengers were on board.

Boeing has a considerable amount of information about the jet . It . The largest version can carry 365 passengers.

Update at 1 p.m. PT. On The Passenger Who Tweeted "Everyone Seems Fine":

in December 2011. He's the person "I just crash landed at SFO. Tail ripped off. Most everyone seems fine. I'm ok. Surreal..." and posted a .

"The airline said 291 people were on board, but there was no official word on any casualties," .

"It's not immediately known how many casualties are involved, though televised pictures and images posted online show many survivors exiting the plane or standing outside the damaged aircraft afterward," . "Thick smoke rose from the site of the crash on an airport runway, but the fire was quickly extinguished."

A man who says he was on board, Samsung executive David Eun, , "I just crash landed at SFO. Tail ripped off. Most everyone seems fine. I'm ok. Surreal..." He's also posted a photo of what looks to be the same plane that's being seen on the cable news networks' broadcasts. The photo, taken on the ground, shows a crippled Asiana Airlines jet, smoke rising, and passengers walkng away. 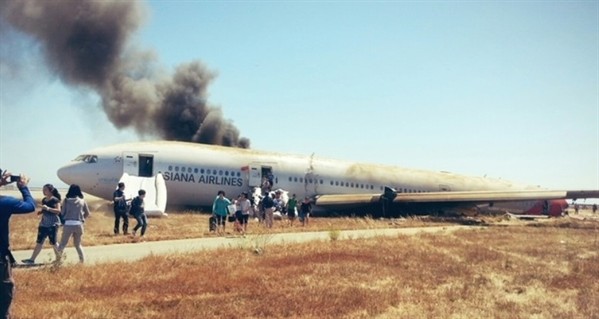