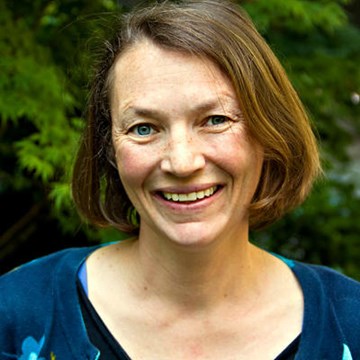 Ashley Gross is KNKX's business and labor reporter, covering everything from Amazon.com and Boeing to garbage strikes. She joined the station in May 2012 after working for five years at WBEZ in Chicago, where she reported on business and the economy. Her work telling the human side of the mortgage crisis garnered awards from the Illinois Associated Press and the Chicago Headline Club. She's also reported for the Alaska Public Radio Network in Anchorage and for Bloomberg News in San Francisco.

She studied history at Brown University and earned a master's in international affairs at Columbia University. She grew up in Santa Fe, New Mexico. She lives in West Seattle with her husband and two sons.

One of Ashley's most memorable moments in radio happened several years ago in Northwest Alaska: "I was visiting an alcohol and drug rehab program in the tiny village of Selawik. It helps Alaska Natives recover by helping them get back in touch with their subsistence lifestyle. It was spring, which meant the river was still frozen - barely. We went out on snowmachines to go ice-fishing, but late in the day, as we headed back, the river had melted to the consistency of a Slurpee. It was a harrowing ride and a good lesson in trust - I rode with my eyes closed, clinging for dear life to the woman driving. A week later, three people drowned trying to ride a snowmachine over that river, and that's when I realized just how dangerous life in rural Alaska can be."