A herd of hyper 7th graders careen into their classroom at Quincy Junior and Senior High joking and laughing with each other. They’re in high spirits— clearly excited that the school year is nearly over. But, as they finally settle in at their desks, they learn one last sobering lesson awaits them.

“Does anyone know what an opioid is?” Today’s guest speaker, James Wilson, gets their attention from the center of the room. He’s a 34-year-old with an easy smile and dark, shoulder-length hair. Years ago he was a student in this very classroom. Now he works for the Plumas County Public Health Department coordinating their opioid safety coalition.

At his question, a bunch of eager hands shoot up. Wilson spins around and points to a boy in a spiffy looking tie. “OK, so an opioid is a powerful painkiller," the student says confidently. "But it's also addictive...”

Such conversations are growing more frequent in this Sierra foothill community as the painkiller epidemic plaguing California and the rest of the country destroys more lives here. The latest data from 2015 shows Plumas County has the highest overdose death rate from prescription opioids in the entire state. This is partly because the county is rural and sparsely populated. So it only takes a few deaths to make the rate spike up. But it also only takes a few deaths to have a real impact on a tight knit community like this.

Wilson’s work with the Northern Sierra Opioid Safety Coalition is focused on trying to slow the wave of addiction and overdoses in the greater area here -- which also includes the surrounding counties of Lassen, Sierra, and Modoc.

They’ve got a number of strategies to do this. The first one is working with doctors to change their pain-management practices. They’ve also started a buprenorphine clinic -- that’s the drug that’s used to treat people already addicted to opioids. And, finally, they’re trying to get the overdose reversal drug, naloxone, distributed as widely as possible, including to schools like Quincy Junior and Senior High. 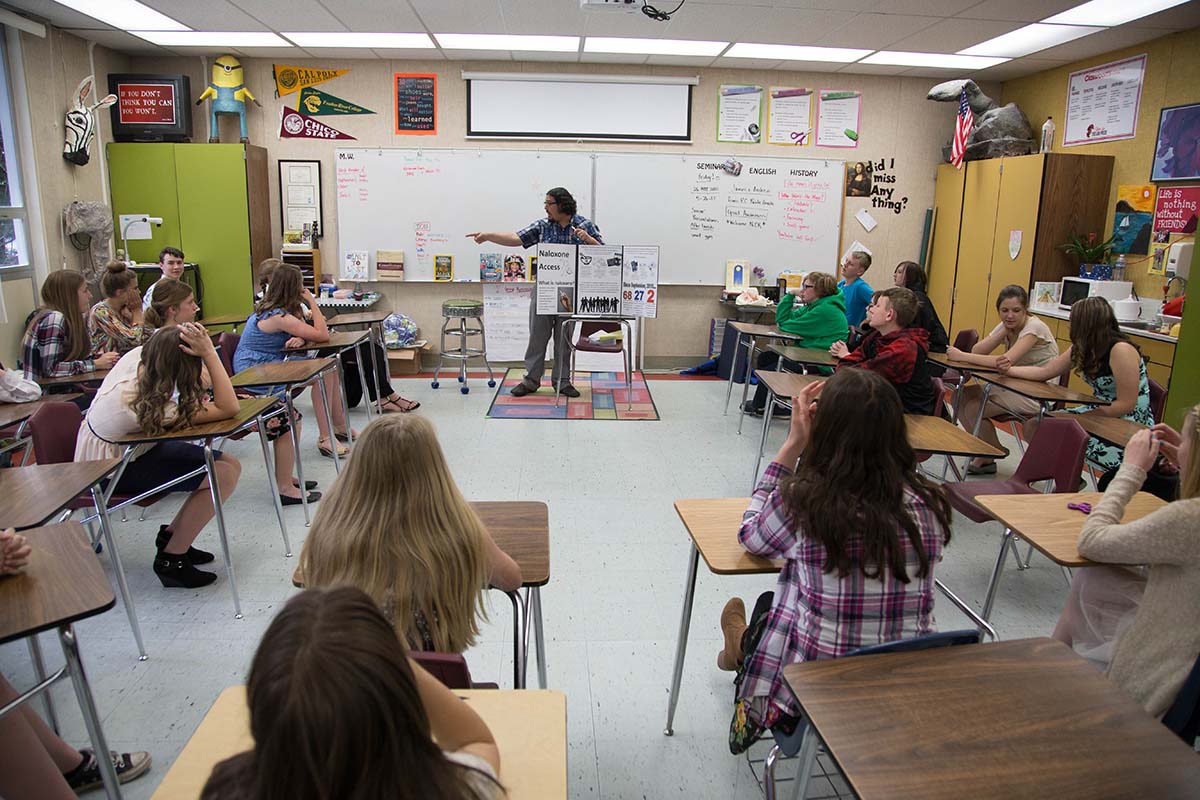 James Wilson was once a student at Quincy Junior and Public High School, and now helps teach students about the dangers of opioids. Andrew Nixon / Capital Public Radio

Teacher Suzanne Stirling is in favor. She says when she first started teaching here, a student did overdose at school. “And it was quite scary,” she says. “And had we had perhaps this training or this program in place in our county before then, you know our nurse wouldn't have had to wait for an ambulance.”

This might seem like a strange thing for a 7th grade teacher to have to worry about. But Stirling says her students are exposed to drugs all the time. Some are legally prescribed opioids as pain medications for injuries like broken bones. Some have lost parents or family members, even peers, to opioid addiction.

And when James Wilson asks the students whether they know anyone who has personally been affected by opioid overdoses, five or six hands go up.

Wilson himself has had friends overdose and die young. He says getting the anti-overdose drug in schools would be one simple way to help fight the problem. 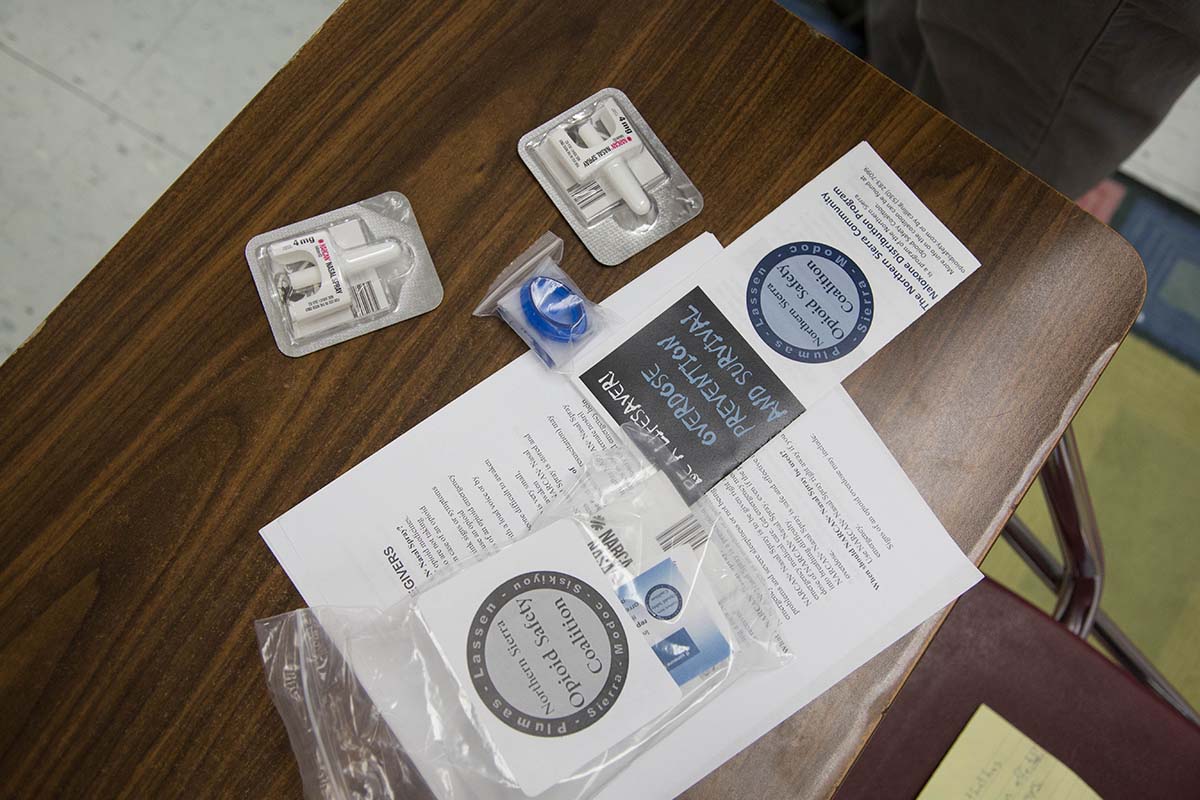 The Plumas County school board would have to sign off before campuses could start stocking naloxone, like the doses Wilson brings with him to classrooms. Andrew Nixon / Capital Public Radio

And the superintendent’s office at the Plumas Unified School District echoes Johnson’s caution. Even though the company that manufactures the drug has offered to give two free doses to every high school in the country, the district says they need some serious questions answered before they’ll take them up on that offer. Does naloxone need to be administered by a registered nurse? Are there legal implications for the school? With only three part-time nurses for 11 school locations, would charging school staff with an overdose response really be quicker than calling the paramedics?

All these logistics feel stifling to Wilson. “It's sometimes a little overwhelming,” he says, “how much of that needs to happen before something that seems simple could get into place.”

But it’s not stopping him from teaching these students how to recognize and deal with an overdose if they should ever encounter one. Call 9-1-1 first, he says. And then administer naloxone.

To show them how, he gets two students to volunteer. One lies down on the floor pretending to be an overdose victim. The other gets a demo vial of the anti-overdose drug, which comes in nasal spray form. “You’re just gonna open this up,” he coaches her, “and in one nostril, just one big push, administer the whole thing.” The students giggle. But they know overdoses happen in their community. And they’ve made it clear they want to be part of the solution.

The Plumas County school board would have to sign off before campuses could start stocking naloxone. They’re on track to make a decision by early August. And Wilson hopes they’ll say yes before the start of next school year.