California Governor Jerry Brown is in China this week looking to strengthen ties in the fight against climate change. In reality that’s meant meetings heavy on formality and light on substance, which could open the way for more concrete agreements down the road. But the governor has a more specific goal, as well: Brown is pushing the Chinese to invest in batteries for California electric cars.

But there’s no real discussion or negotiation in these talks. It’s more ceremonial.

Whether in Chengdu, Nanjing or Beijing, Brown and the Chinese official sit in the center of a plushly-carpeted conference room, with a small table between them. Flanked by an exactly equal number of staff, they air general statements about collaboration through translators.

"California has been a pioneer in the new mode of development. You have a lot for us to learn from," said Li Qiang, the Communist Party secretary in Jiangsu Province.

Brown was gifted a porcelain tea pot—with a history of more than 1,000 years, according to Qiang.

"Thank you," said Brown. "I like Chinese tea very much."

Devil's In The Details

The meetings often end with the signing of agreements to work together. They’re non-binding, which is typical—also true of the Paris agreement and Brown’s own climate change coalition of states and regions. But in an April conversation about those pacts, Yale University climate scientist Angel Hsu said that makes it hard to judge the effects.

"The devil again is always in the details. Whether they will be able to actually follow-through on their plans and then be able to report back," said Hsu.

So why do this trip? The governor’s office says it won’t know the cost until after, but you can bet Brown gallivanting halfway around the globe with a delegation of two dozen people—at the same time as he’s proposed slowing state spending—will be fodder for critics. (Brown spokesman Evan Westrup says taxpayers aren't on the hook. Consistent with previous international trips, he says, the non-profit California State Protocol Foundation will cover governor's office costs. The Energy Foundation is paying for staff from the California Air Resources Board and California Energy Commission.)

In nearly all of his Chinese meetings, there is one area where the governor has made a specific plea.

California has a goal of putting 1.5 million electric cars on its roads by 2025, about six times the current number. But that’ll require less expensive batteries.

Yunshi Wang directs the China Center for Energy and Transportation at UC Davis, and he happened to be on our high-speed rail train from Nanjing to Beijing. Wang points to one immediate, practical implication for Chinese companies that want to compete in the U.S. market.

"They need a permit to invest in foreign countries, transfer money out," said Wang.

And now they can point to government statements to support those permits—a protective umbrella, you might say.

"When they invest their money in a foreign country, when it rains, they have something over their head, so they can say ‘I’m following the government’s agreement with them,’" said Wang.

Chinese technology minister Wan Gang may have opened the door for a Chinese company to bring that electric vehicle to California for the governor to sit in when he met with Brown Tuesday in Beijing.

"I hope that Governor Brown someday can sit in the EV we produce in California," Gang said.

On Wednesday, Governor Brown is holding a day-long meeting of state and regional leaders who have signed on to his climate change pact, the Under2 Coalition.

Editor's Note: This story has been updated to reflect additional information from the governor's office about how the trip is being paid for. 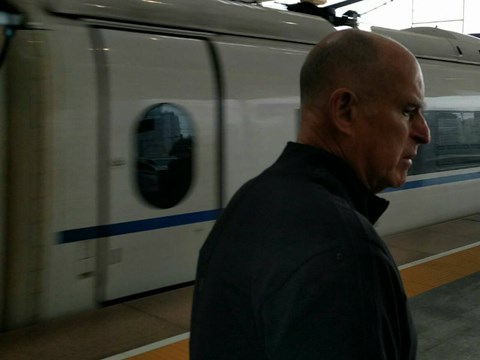 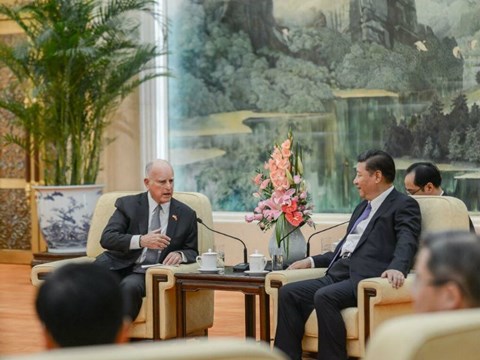 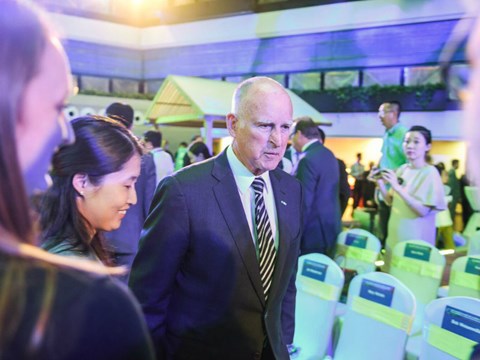