June 6, 2:30 p.m.: California Governor Jerry Brown says Chinese President Xi Jinping is welcoming the opportunity for their governments to partner in the fight against climate change.

“It’s highly significant that the governor of California can meet with the president of China, talk about very specific issues on the foremost challenge of our time – namely, climate change – and commit to taking the kind of steps that are needed to further this process of energy transformation.”

The governor says Xi did not rebuke the U.S. withdrawal from the Paris climate accord. But Brown says he believes the Chinese government is now ready to give its private companies the green light to invest in California clean technology efforts, such as electric vehicle batteries.

June 6, 2:20 p.m.: California Governor Jerry Brown is in China this week looking to strengthen ties in the fight against climate change. In reality that’s meant meetings heavy on formality and light on substance, which could open the way for more concrete agreements down the road. But the governor has a more specific goal, as well: Brown is pushing the Chinese to invest in batteries for California electric cars.

You can continue reading here.

June 6, 6:00 a.m.: Gov. Jerry Brown has met with Chinese Pres. Xi Jinping in Beijing in a closed door meeting, a rarity the governor called "highly-unusual." Brown is in the country to discuss climate change and meet with various officials.

Brown's office said the meeting with Jinping lasted 45 minutes at the Great Hall of the People in Beijing on Monday. The two discussed "the importance of expanding cooperation on green technology, innovation and trade."

In a statement, the governor's office said the two officials agreeed to continue working to expand bilateral cooperation particularly on green development."

As the Trump administration works to reverse U.S. climate change actions, China appears to be looking to California as a partner in efforts to stave off global warming.

According to CapRadio's Ben Bradford, who is covering the governor's trip, Brown's staff had been working on getting a meeting with the Chinese president. But it was not a sure thing.

On Monday, Brown also met with the country's science and technology minister. 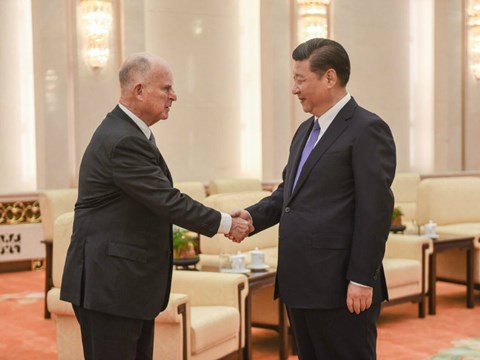