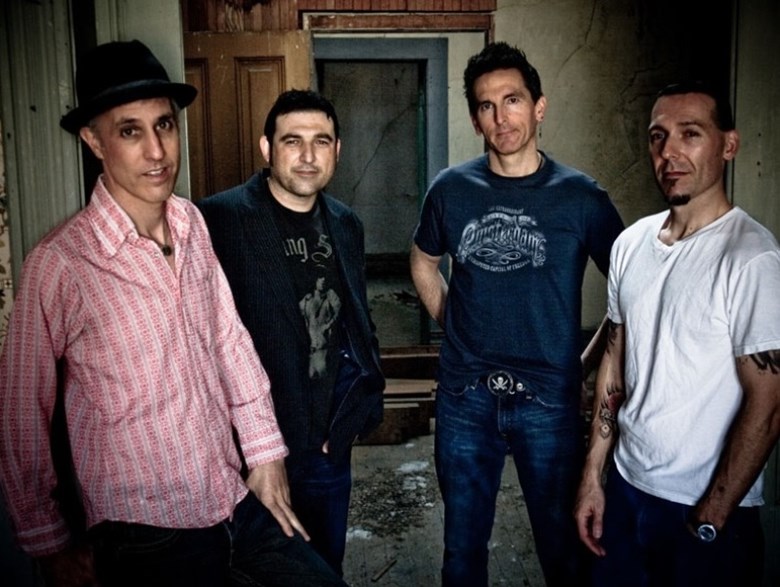 The Nickel Slots have been described as a cross between Johnny Cash and The Clash. And they're taking their country-rock sound and kicking off Concerts in the Park tomorrow night.

The Nickel Slots are four guys who live in the Sacramento area and play a mix of rock and country they call “Americana with Attitude.”

Here's a little taste of their sound and style.

We sat down with some of the guys from Nickel Slots to talk about their musical journey and the phrase Americana. Paul Zinn is the bassist and Chris Amaral is the drummer.

Chris Amaral: “Americana can be such a buzz word. I mean it goes from anywhere to folk music to alt country and I think with the ‘attitude’ part of it, it gives us a little more of a ‘in your face’ maybe.”

The Nickel Slots also include Chris’ brother Steve on guitar and singer Tony Brusca, who writes the band’s songs. All the guys have day jobs – Paul works for a software company, Steve is a graphic designer and Tony is a teacher. Chris, the dummer, is a pharmacist, although he looks like a rocker with his greased back dark hair, ribbed white tank-top and tattoo covered arms…his right upper arm wrapped in clear plastic.

Chris Amaral: “I actually just came from Forever Tattoo and got some work done so it’s kind of raw.”

Paul Zinn: “He wears the long-sleeve shirts on the other job.”

Growing up in Northern California in the ‘70s and ‘80s, most members of The Nickel Slots were raised in homes where both country and rock music were played. Although Paul the bassist says his exposure to country came…at church.

Paul Zinn: “The priest was our lead singer – Father Cowboy and The Buckeroos. He’d play all kinds…you know, ‘Drop Kick Me Jesus through the Gold Posts of Life’ and that kind of stuff. So I’ve always had a love for country ever since then.”

The Nickel Slots have been together for six years. They’ve won two local “Sammie” awards for Best Country/Americana Band. And their third album “Let It Ride” will be released tomorrow. Chris explains that their songs are sort of like hopeful hard-luck stories, which is also what their name – The Nickel Slots – is all about.

Chris Amaral: “When you hit a jackpot in a nickel slot it’s not that much money but you get excited. So we’ve kind of always gone with this theme – desperate but hopeful. And it seems that in a lot of our songs there are individuals that are pretty desperate but there’s some kind of hope in that, that whether or not they survive or just get along with whatever their situation is.”

Paul Zinn: “Once you get into your 40s you’re not likely going to break it big anytime soon so we’re enjoying what we have here, and building our following, and taking little tours here and there. But it’s still more of a paid hobby at this point.”

Chris Amaral: “I don’t think any of us are expecting to pay the rent with this band, if it happens if happens but if it doesn’t, as long as we’re writing good songs and having an impact on people’s lives…there have been some humbling experiences that we’ve had when we’ve gotten emails about people going through a tough time and they’re like ‘we heard your song and it helped me through,’ that makes you feel special that you’re having an impact on someone’s life. So that’s a pretty good feeling.”

The Concerts in the Park series kicks off tomorrow at 5 PM at Cesar Chavez Park in Downtown Sacramento.

May 30: James Cavern and the Council | Joy & Madness | Survival Guide | Once an Empire | Billy Lane

Email newsletters for bands at ReverbNation.com