In the hours following the Russian invasion of Ukraine late Wednesday night, members of the Slavic-speaking community in the Sacramento region organized an impromptu rally at the steps of the California Capitol to protest Russian president Vladimir Putin’s unprovoked actions.

Hundreds of people — residents of Ukrainian descent and their supporters — flew the blue and yellow Ukrainian flag, held signs donning the country's colors and chanted “save Ukraine, save the world” and “stop Russian aggression.”

Andriy Kryshtafovych, one of the organizers of the rally, said to win this fight, Ukraine will need military and humanitarian support from other countries.

“We are too small to fight Russia with all this weaponry that they have,” Kryshtafovych said. “We will fight for our land. Our people are resolute to fight for freedom, and we have been doing this for a long time. But this time we do need support of whole world.” 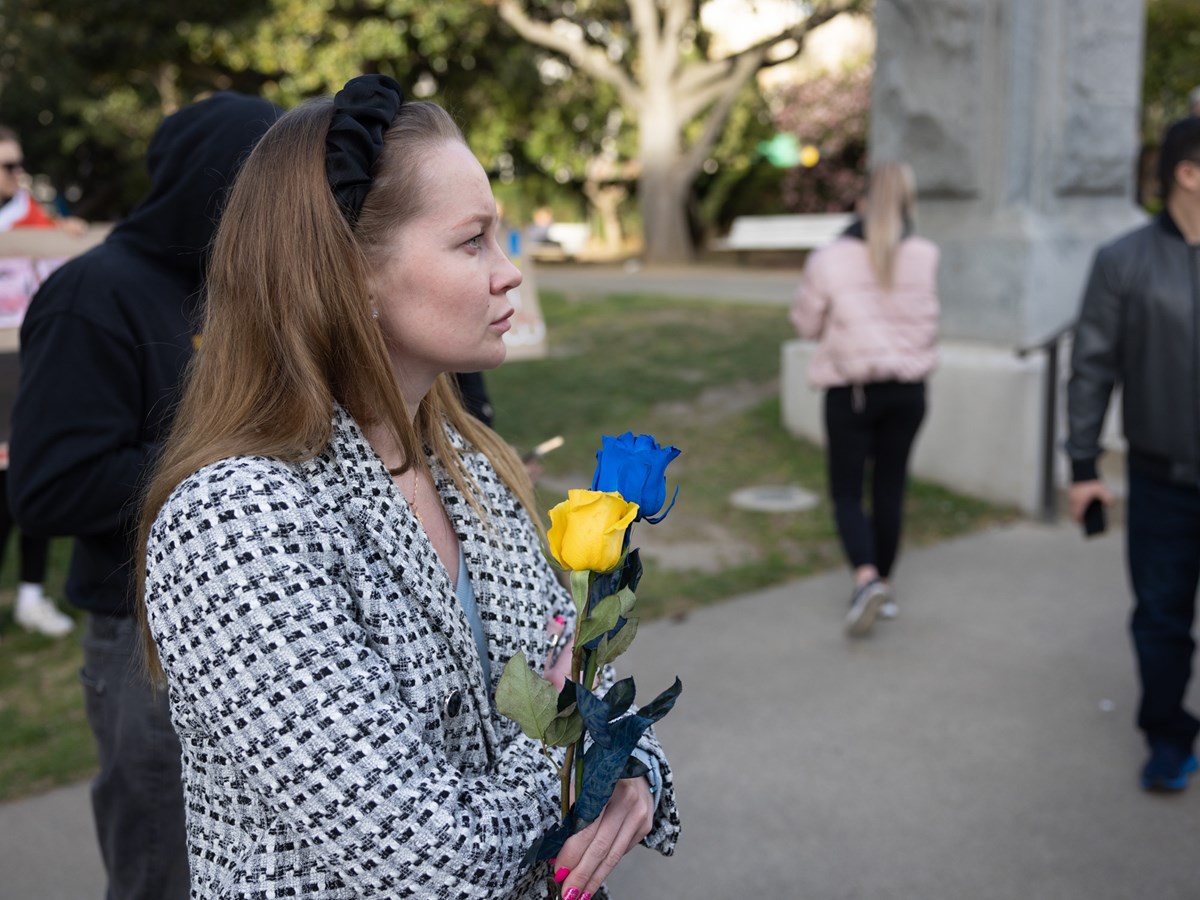 Daria Mechkova carries flowers in the colors of the Ukrainian flag at a peace rally at the Calif. State Capitol on Thursday, Feb. 24, 2022.Andrew Nixon / CapRadio

Alex Tovarian, an immigration attorney active in the Russian, Ukrainian and broader Slavic community in Sacramento County, spoke to Insight days before the invasion. At the time, he said he didn’t expect a full on attack from Putin.

On Wednesday night, he was in shock.

“We were so hopeful that whatever he did, his attacks will be limited in the areas of those undisputed territories, which are now deemed independent,” Tovarian said. “However, as we know, unfortunately, Vladimir Putin moved inside the country and so many different types of attacks were inflicted on Kyiv and Kharkiv and other cities.”

Lubow Jowa, the president of the Ukrainian Heritage Club of Northern California, was also shocked that Putin would launch a full-scale invasion on Ukrainian soil after weeks of saying the opposite.

The Sacramento region has a large population of Ukrainian and Slavic immigrants, and many are gathering at the California state Capitol to protest Russian invasion of Ukraine. pic.twitter.com/aqbaT4akoz

Jowa says she’s heard from friends and relatives who are still trying to escape.

“They're terrified. I mean, they want to leave Ukraine — many of them do,” Jowa said. “And right now, Russia really controls almost three quarters of the entire border. I mean, it’s only through Poland that they can have much hope and get out.”

Tens of thousands of Ukrainian Americans live in the Sacramento metro area, according to 2019 figures from the U.S. Census Bureau, one of the largest communities in the country. 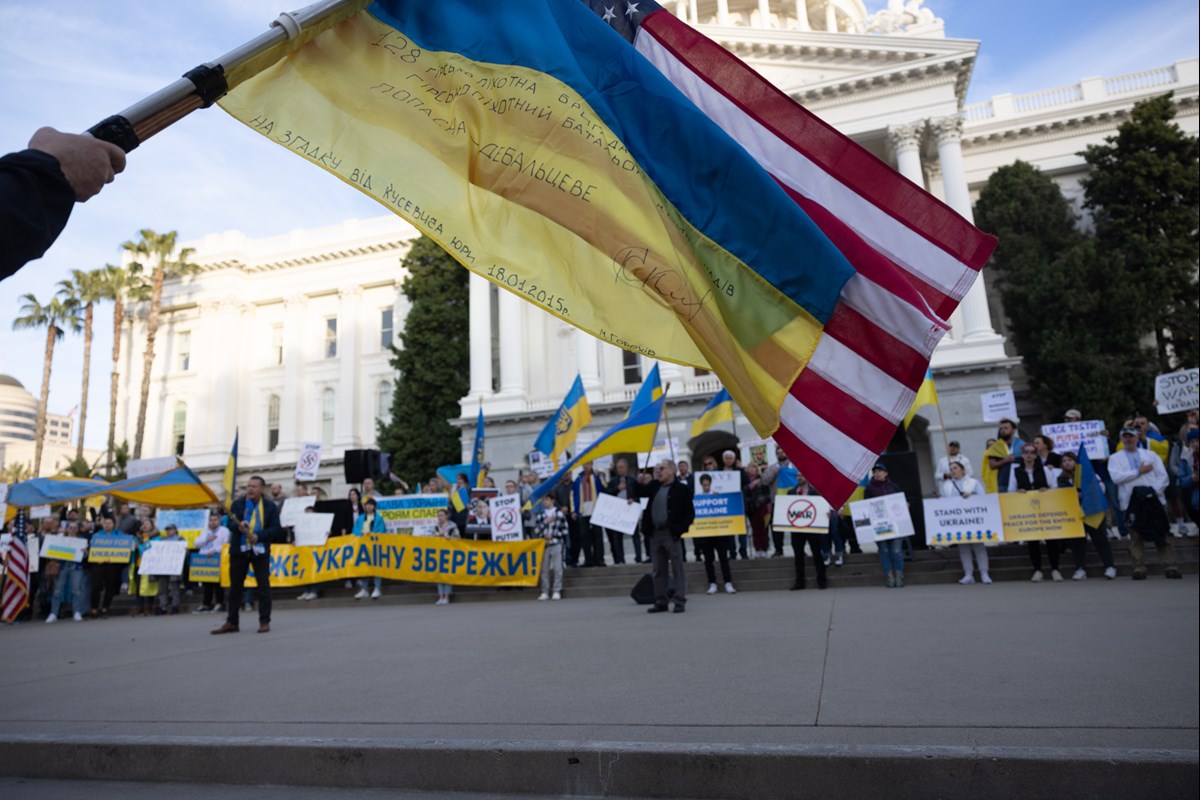 Vlad Skots, chairman of the Ukrainian American House in Rancho Cordova, is one of them. He has five siblings living in Ukraine, as well as his parents. He says one of his brothers was seeking protection in a bomb shelter with his family when he spoke to them Thursday morning.

“Ukraine, especially people who live there, they never expect Putin to totally lose his mind, and start to attack the capital city,” Skots said.

Valentin Vavrenyuk, the pastor at First Ukrainian Baptist Church in Roseville, says many members in his congregation are deeply concerned because they still have family living in Ukraine.

“We understand what’s going on, but we’re Christian people,” Vavrenyuk said. “We pray about peace, we understand that everything in God’s hands.”

“A great tragedy befell our dear homeland Ukraine. We categorically condemn the war,” Len and Mykhailiuk wrote. “Ukraine is a peaceful, sovereign state inhabited by people who want to decide their own destiny. We pray for our families, friends, relatives and all the people who are in the territory of Ukraine.

“We hope for an end to this terrible war as soon as possible. Dear fellow Ukrainians, hold on! Our strength is in unity. We are with you!”

Meanwhile, President Joe Biden on Thursday afternoon called Russia’s attack "a brutal assault on the people of Ukraine." Biden also announced new sanctions on Russia and stated that U.S. forces in Europe “are not and will not be engaged in a conflict with Russia in Ukraine.”