Shane Twilla says the past two years of COVID-19 was already weighing heavily on him. So the news of another surge, this time fueled by the omicron variant, just feels like another blow on the Sacramento small business owner.

“It was like a gut punch,” said Twilla, who co-owns a clothing and gift shop at DOCO called Identity Boutique, which lately, has only seen a trickle of in-person customers every day.

The pandemic has left Twilla and his business partner and fiance scrambling to stay financially viable while following changing public safety guidelines and dealing with COVID-19 scares at the same time.

Business owners are not the only ones overwhelmed and burdened by the latest COVID-19 surge. The current increase in cases, the sharpest uptick in Sacramento County since the start of the pandemic, has led to widespread absences, low morale and fatigue in the major social sectors that meet our most basic needs.

Sacramento County is experiencing a staggering spike in new reported cases, and recently broke its record for the highest seven-day average of COVID-19 cases ever experienced during the pandemic. 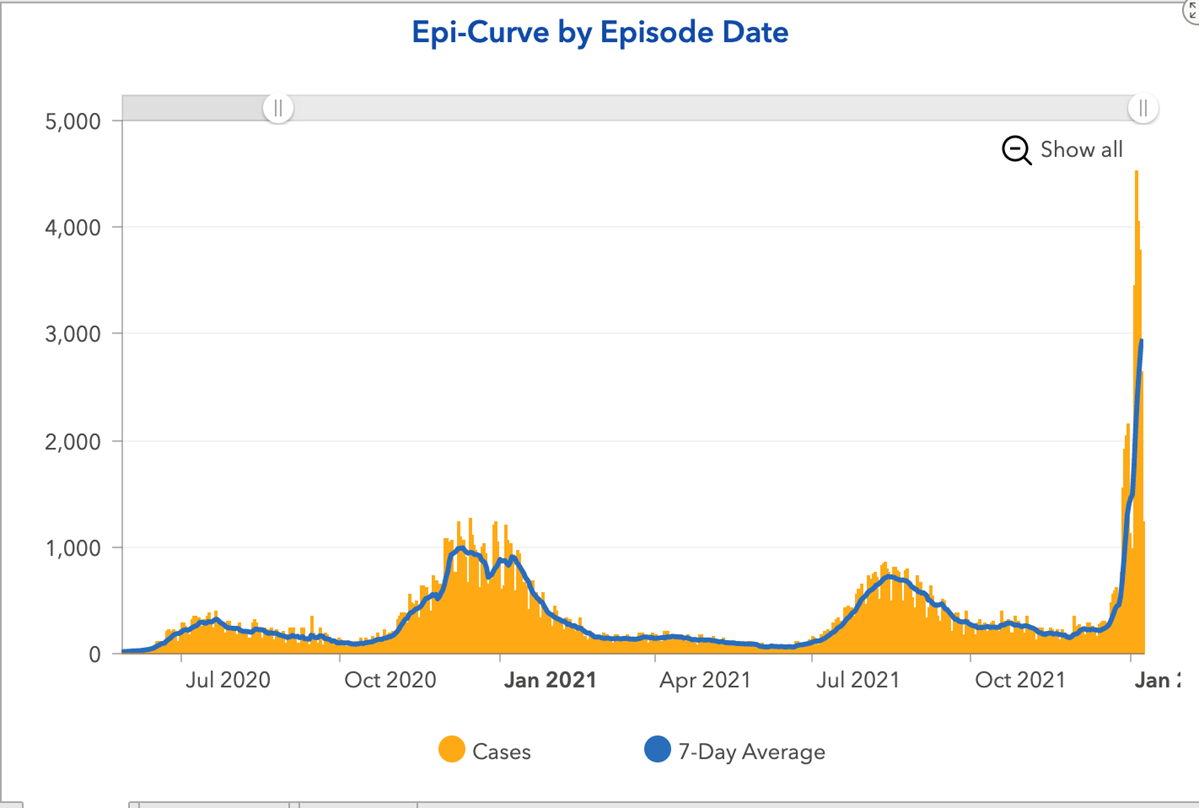 On Jan. 4 of this year in Sacramento County, 4,532 people had a COVID-19 case confirmed or symptoms start, also known as the episode date. That’s more than three and a half times the previous record of 1,269 on Dec. 14, 2020, during one of the bleakest periods of the coronavirus.

Dr. Olivia Kasirye, Sacramento County’s public health officer, says that the most recent spike is mainly due to the omicon variant, which is now the predominant strain in the area. Holiday gatherings and end-of-year travel contributed to the cases, she said in a press briefing.

The surge has also taxed county-run testing sites. According to Liz Gomez, a health program manager with Sacramento County, people waited up to three hours to get tests at the county’s thirteen test sites in early January. They’ve been trying to staff up, to meet the demand.

“Our staff and their families are also impacted by the increased transmission we're seeing,” said Gomez on Jan. 6. “It is a challenging situation.”

UC Davis public health expert Brad Pollock said the drastic surge in cases is not surprising given that the omicron variant is more transmissible than previous coronavirus strains.

“This is a very spiky epidemic curve, so people are getting sick very quickly,” said Pollock, chair of the UC Davis Department of Public Health Sciences.

Pollock said while highly contagious strains like omicron create sharp case spikes, they also give way to drastic declines. In the meantime, a lot of people get taken out of work in the process, he said.

“It's really producing a strain on many aspects of society,” said Pollock.

As of Thursday, Jan. 6, Pollock said most of the patients in hospitals are unvaccinated people.

“For those of us that are fully vaccinated and boosted, the likelihood of ending up in the hospital is much, much lower,” said Pollock.

Pollock said while vaccinated people are less likely to get very sick with COVID-19, there’s still reason for everyone to take precautions.

“You still do not want to get infected because it's going to propagate the pandemic and you may come into contact with people that are not protected,” he said.

The current omicron-fueled surge is expected to peak in late January, according to Kasirye. She asks that people get vaccinated against the virus, and refrain from going to the hospital unless it’s a true emergency.

“It’s a hard time,” she said. “But we need to remain hopeful that we’ll get through this. And we need to work together.”

Workplace absences abound in Sacramento and throughout the state.

Sacramento City schools are grappling with widespread staffing shortages — amounting to a whopping 21.2% of workers being absent last Friday, according to a recent SCUSD press release.

As a result, the district says, principals and other personnel credentialed to teach were asked to  cover for teachers who called in sick.

The student and teacher absences look different at every school, according to David Fisher, board president of the Sacramento City Teachers Association. He says in one school, only three students may show up in a classroom. At another site, hundreds of kids may be corralled into an auditorium so they can be supervised.

Fisher says teachers are feeling a range of emotions related to the unprecedented pandemic circumstances.

“In some cases, it’s becoming too much for people,” said Fisher about teachers balancing the needs of students, covering for their colleagues, and taking care of their own families. “It’s really quite daunting,” he said.

The overwhelming challenges are being felt by district leaders as well.

The absences are hitting grocery stories, too. At least 300 members of UFCW 8 Golden State, which represents workers in California’s supermarkets, drug stores, and food industries were out sick with COVID-19 during just one week in early January, but the union says the number is likely higher.

“They’re exhausted,” said Jacques Loveall, president of the union, which represents 35,000 workers throughout California. “This has been going on a long time, and our members are on the frontline … dealing with an enormous amount of people.”

As a result, Loveall said, they have to constantly stay vigilant about protecting their health.

“It’s been a real demand on them emotionally,” said Loveall. “Imagine when everyone was in lockdown, they were showing up to work everyday.”

Dr. John Belko, a pediatric disease specialist at Kaiser Permanente in Roseville, said their medical facility was also scrambling last week because of staff absences after the holiday, particularly in the outpatient departments.

“Not only did we see it among our patients, but we also saw it among our staff as staff were off for the Christmas holiday,” he said.

Belko says the most challenging part of working in health care right now is dealing with vaccine hesitancy and conspiracy theories he hears from patients.

“[I’m] being a little more frustrated with people who have made choices that I may not personally agree with,” said Belko reflectively. “It's hard to not let that show sometimes.”

For Shane Twilla, the business owner at downtown commons, fear is now keeping him going in this phase of the pandemic.

He said he and his business partner and fiance Stephanie Bozzalla are just trying to stay positive, keep going, and adapt to keep them physically and financially healthy.

Natalie Hurlen, a Sacramento resident and mother of a third grader at SCUSD, says because of this surge, she has tightened up her social circle, only interacting with people who are as cautious as she is about COVID-19 []

But she says she feels more comfortable navigating this surge in the pandemic, partly because her whole family is vaccinated now. When the delta wave hit at the beginning of the school year, Hurlen homeschooled her son for a few weeks. But now that he’s vaccinated, his school attendance isn’t interrupted.

“At this point, we know what to do,” said Hurlen. “I’m masked up, I already made a pattern of trying to get groceries curbside.”

Loveall, the grocery store union president, says there’s been one silver lining for their membership during the pandemic. Employers have been “particularly good and responsive” about accommodating worker safety and have augmented workers’ salary with “hero pay.”

When it comes to protecting the people still working in public-facing jobs through this surge, Loveall asks everyone to be nice to those on the frontline.

“They’ve been through a lot … Kindness goes a long way,” said Loveall.

Editor’s Note: Natalie Hurlen works for a large company that makes COVID-19 tests, but she spoke with CapRadio about her personal experience.