The 8th Annual Homeless Memorial Candlelight Vigil took place on Tuesday, December 22, 2021. 139 names were read, the most that’s been read since the event began in 2013.

Mark Bell made companions out of six cats and poems out of pictures of everyday life.

Nina Kirchner’s joy showed in many ways, one of the most prominent a small star tattoo on her face.

Both of them were unhoused and frequent guests at Loaves and Fishes, an organization that provides food and services to unhoused people. Their stories were among the many shared after sundown Tuesday night, in front of Sacramento City Hall in 40-degree rainy weather at the county's Homeless Memorial Candlelight Vigil.

Around 50 people gathered for the eighth annual event, held on the longest night of the year to recognize the unhoused neighbors who lost their lives over the past 12 months. The ceremony coincided with National Homeless Persons’ Memorial Day, with similar ceremonies held across the country.

Bob Erlenbusch, executive director of the Sacramento Regional Coalition to End Homelessness, said that holding the memorial was important, in part, because it was a “simple act of dignity” to provide a “dignified remembrance” for unhoused neighbors.

“For thousands and thousands of homeless people in our community, they're all too often invisible to policymakers to the community in general,” he said. “I should say this is easily 40 to 50 more names than we read last year, which is horrifying.” 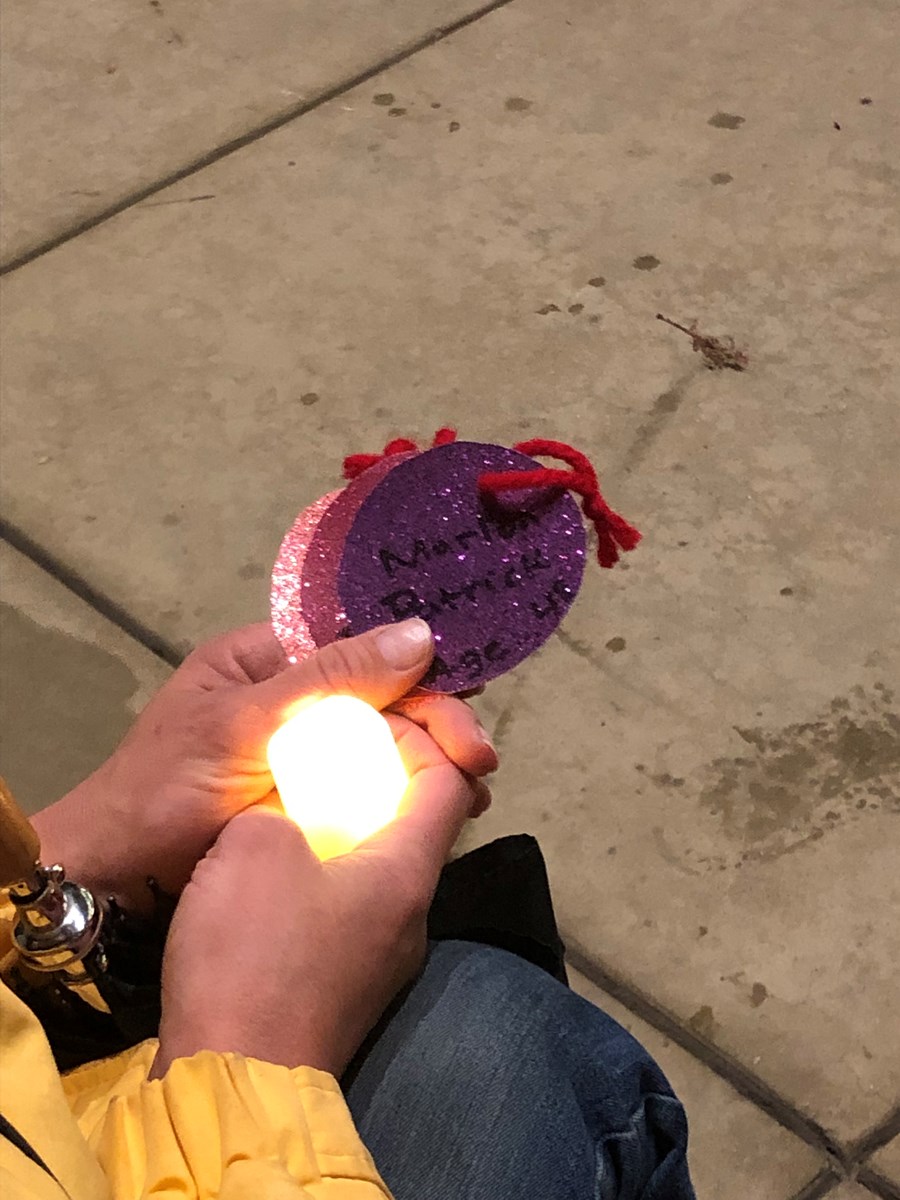 Tags with names of unhoused people who died in the past year were given out to participants along with candles to honor the dead.Sarah Mizes-Tan / CapRadio

“Many of those [deaths] were preventable,” Erlenbusch said.

Last year, 90-plus names were read out, and he noted the list was not comprehensive.

“We have to find a way to get people housed, because we're telling a young generation that their survival and well-being are not important to us as a society,” said Faye Wilson Kennedy, co-chair of the Sacramento Poor People’s Campaign. “We may not be saying that directly, but indirectly we're doing that.”

She said many of the speakers at the memorial knew and had worked with those who had died.

“They’re human beings, they live full lives,” she said. “And they’re going to be greatly missed.”

A demand for permanent housing and critique of the city’s lack of response to Tuesday night’s rain were also woven throughout the night’s remembrances.

Kennedy led chants of “What do we want?” “Housing!” “When do we want it?” “Now!” as part of opening the memorial.

“The weather has been extremely cold in Sacramento, it's wet, it's damp,” Kennedy said. “And many of our unhoused brothers and sisters are already at risk for other ailments. And so once they get cold and wet, they succumb and they die.”

On top of the inclement weather, Sacramento encampments have been subject to increased clean-ups or “sweeps,” over the past year.

Erlenbusch said he saw about 20 to 30 people gathered under the overhang to ride out the Tuesday night downpour, but that the number was not uncommon. And the weather takes a toll on those residents.

While Sacramento opened City Hall as a warming center the previous weekend, along with Hagginwood Community Center, it remained closed during Tuesday night’s rain. Sacramento  County had also opened two warming centers from Friday to Sunday, which saw a total of 39 people compared to the 153 who were sheltered through motel vouchers.

Gregg Fishman, a spokesperson for the city, said Sacramento opens respite centers based on a combination of weather factors and staffing availability.

“Because we don’t have unlimited staff with the skills necessary to work in these centers overnight, we utilize our employees as smartly and strategically as possible so the centers can be open and available when people need them the most,” he told CapRadio via email.

The city voted in March to keep emergency drop-in centers open year-round regardless of weather conditions, but this has not yet been activated.

Fishman said the city is currently evaluating potential respite locations and working to open a full-time center at the old Science Center on Auburn Boulevard. Discussion of that center returns to City Council next month.

“If all goes as planned, that site would serve as an overnight respite center regardless of weather and as a triage center where people experiencing homelessness can be evaluated and connected with the available resources that meet their needs,” he said.

Barriers keeping unhoused people from accessing warming and cooling centers, which have been routinely underutilized, include information gaps, a lack of transportation and the potential loss of belongings and pets in the relocation.

Those centers, Kennedy said, are still not a replacement for permanent housing.

While the city approved 20 sites for a variety of housing solutions in March, including permanent and emergency housing, none of those sites are yet operational.