Republican redistricting expert Matt Rexroad said what the commission did this week “wasn't a lot better” than when state lawmakers drew lines before the commission existed pre-2011.

“The public wasn't given an opportunity to review those [draft maps] prior to the commission voting” on Wednesday, he said. “If public comment is going to be important, the public has to be able to look at those tools that are given to them by the commission and be able to say ‘yes or no,’ ‘I like that or don't like that.’”

For most of the day, the only version of the draft congressional map was a low-resolution statewide map that did not allow viewers to zoom in on proposed lines. It was impossible for residents to see proposed changes in the densely-populated Los Angeles and Orange County areas.

It took until Thursday afternoon for a detailed map-based viewer to appear on the commission’s website. Still, Rexroad said the draft districts have inadequate demographic data or they are missing it altogether.

The commission “could make it easy for everyone to see and they're not doing that,” he said. “And to me, that's what's wrong with this process.”

Fredy Ceja, a spokesperson for the commission, said staff was “putting up maps and information as soon as we were able to. Maps kept changing during the four days of meetings, making it difficult to post maps that would become obsolete in a matter of hours.”

He added: “The line drawing team was actively participating in the line drawing sessions, which also made it impossible to create maps to be posted.”

The 14-member commission has spent months gathering public input. During live line-drawing sessions, the commission has been careful to keep communities, particularly communities of color, together for previous unofficial drafts.

So there was concern when many of those espoused priorities appeared to be left out of the draft maps. The congressional map appears to eliminate a heavily Latino district in Los Angeles. It also includes a congressional boundary through the heart of downtown Sacramento.

Democratic consultant Roger Salazar, who works on Sacramento Rep. Doris Matsui’s campaign, said members of congress expect changes in their district lines when redistricting rolls around. But he believes the current lines would dilute the political power of the capital city by cutting it in two.

“I think it's important for the city not to be bisected in the middle of downtown. I mean, I think that's just an obvious one,” Salazar said. 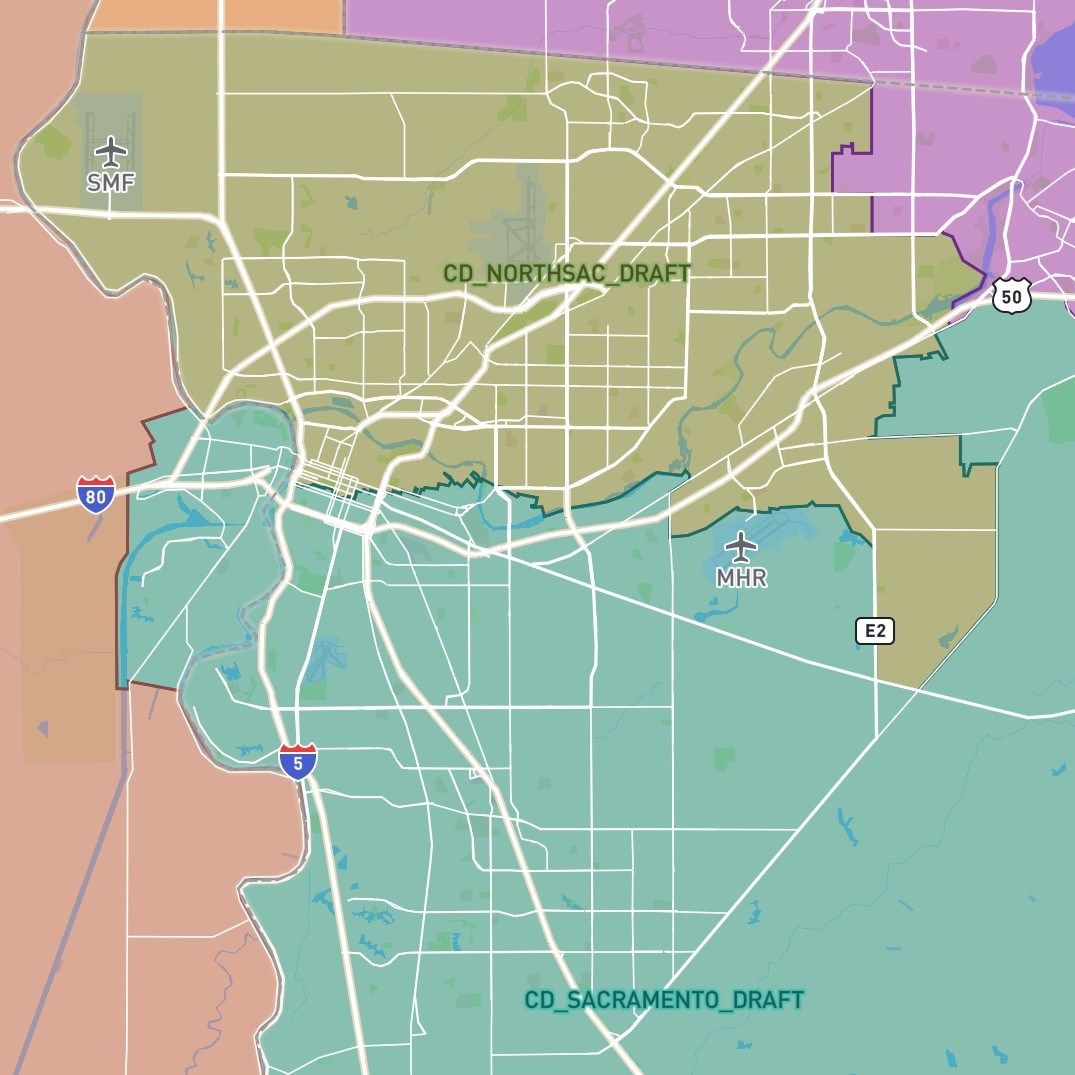 A draft redistricting map would split the city of Sacramento.

Under the current draft, Sacramento County — with the exception of Folsom — is divided into two congressional districts. Nearly all of San Joaquin County is included in a single district — something community leaders have been calling for — while many counties north and west of Lake Tahoe would share a district.

Paul Mitchell, owner of the consulting firm Redistricting Partners, said the map is “very much a first draft.”

“The commissioners have been talking about it as something that’s not done yet. They still have parts of the state that they are concerned about,” Mitchell said. He added that one of those concerns is the Voting Rights Act, which ensures protections for historically underserved communities.

Due to slow population growth over the past decade, California will lose a congressional seat.

The area that will feel those impacts most is a heavily Latino district in Los Angeles, according to Cook Political Report redistricting editor Dave Wasserman.

“I don't think that's part of what this commission wants to have be their legacy — that they were the second commission [since the body’s creation in 2008] and the first one to use this as a process to reduce voting opportunities for Latinos,” Mitchell said.

Though the process is messy, Mitchell maintains California’s redistricting commission is the “gold standard” because it is so public-facing and prioritizes communities over candidates and political parties.

“It is how we should do redistricting for states around the country, even for counties and cities and other agencies,” he said. “Taking the redistricting process out of the hands of the incumbent and politicians that have their own interests and putting it in the hands of residents.”

Many of the commissioners noted Wednesday night that the drafts are likely to change over the next six weeks, before final versions are adopted.

“Our maps are not yet perfect. I believe we have a lot more work,” commissioner Alicia Fernández said after the vote.

The commission encourages the public to weigh in and is accepting feedback through their final deadline of Dec. 27.

Fernández said feedback stands out when it offers suggested solutions, rather than just pointing out flaws.

The Clarksburg Republican said one of the commission’s biggest challenges is ensuring equal population numbers among districts, and feedback that includes suggested changes is helpful.

“Think about what those ripple effects would be to the other parts of California. That’s what we’re grappling with, but you help us get the nuance by telling us what you think would work,” she said.

The commission’s next meeting is Nov. 15.