If you want to dance to live blues at Torch Club, be prepared to show proof of vaccination.

If you want to enjoy a laugh at The Comedy Spot, be prepared to mask up.

And the same goes if you want your computer fixed at Sacramento Tech Exchange.

Fueled by concern about rising cases of the delta variant, a number of Sacramento-area businesses are adopting their own stepped-up COVID-19 protocols. The county is averaging 16.7 cases per 100,000 people over the past week, which would have put it in the purple tier under the state's former reopening system.

“I decided I wanted to get ahead and be more on the preventative side and try to minimize the spread,” said Marina Texeira, owner and operator of the Torch Club. The long-standing downtown Sacramento blues venue began asking customers to show proof of vaccination last weekend.

The Torch Club had been closed for nearly a year and a half before it reopened a month ago. Looking back while sitting in the vacant club midweek, Texeira said the closing and reopening were abrupt. 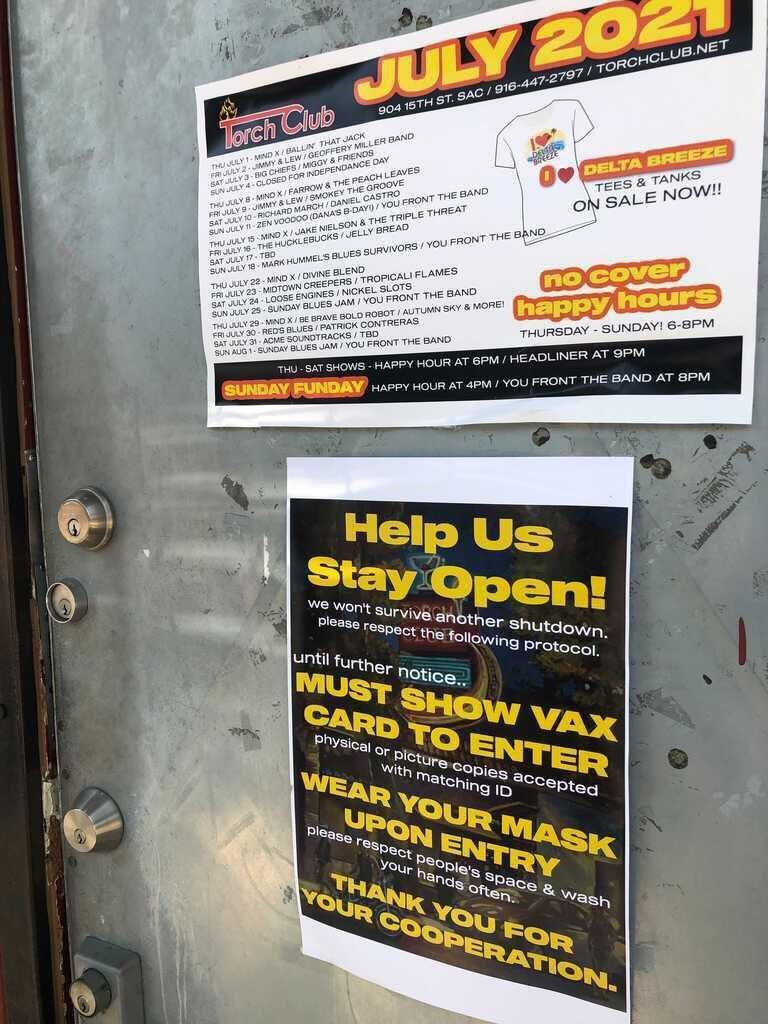 The Torch Club had been closed for nearly a year and a half before it reopened a month ago.Ed Fletcher / CapRadio

“When the governor announced that he would get rid of the tier system and that everything would be open back 100%, I thought that [was] very cool. At the same time, it [was] a  little shocking,” she said.

Texeria said she trusted state and federal officials' stance on reopening without restrictions, but as fewer and fewer customers wore masks once inside and COVID-19 numbers crept up she began feeling uneasy.

She says the new policy is a preemptive response to Sacramento County's recommendation that people wear masks indoors in settings where other people’s vaccination status is unknown.

“This is giving people a reason to get vaccinated so they can be out and the people that already are so they can feel safe,” Texeria said.

They’re also checking vaccination status at The Russ Room entertainment venue above Soloman’s on K Street, but not at Sacramento’s largest music venue, the Golden One Center, where the honor system is in play.

In Midtown Sacramento, The Comedy Spot stepped up its protocols but stopped short of asking staff to check vaccine cards. They are requiring audiences to mask up.

“We just decided before we were told to put on masks, we’re going to do it because we want to protect the people who are around us,” said General Manager and founder Brian Crawl.

Performers must show proof of vaccination but can take off their masks while on stage.

While the entertainment sector presents unique risks, it's not the only type of business enacting new precautions.

Lindsay Nesbitt, who owns the West Sacramento computer repair shop Tech Exchange, says protecting the health of employees and customers is really important to her. She's noticed that many customers are no longer carrying face-coverings.

“So as a small business, we are all wearing masks, but it's very difficult to ask our customers to wear them again, since the mask mandate has been lifted," she said.

Meanwhile, Sacramento resident Marsh Wildman is among the individuals masking up and returning to hunkering down.

Wildman, who said his age, 61, and health conditions make him at high risk of contracting the virus, said he’d just got comfortable unmasking before noticing the uptick in cases.

Wildman also says he’s back to eating at home, for now.

“Along with abandoning the mask, I had started going out to eat a little more,” Wildman said. “That was part of adapting to letting go of that level of caution. I’m back to keeping dining out to a minimum.”