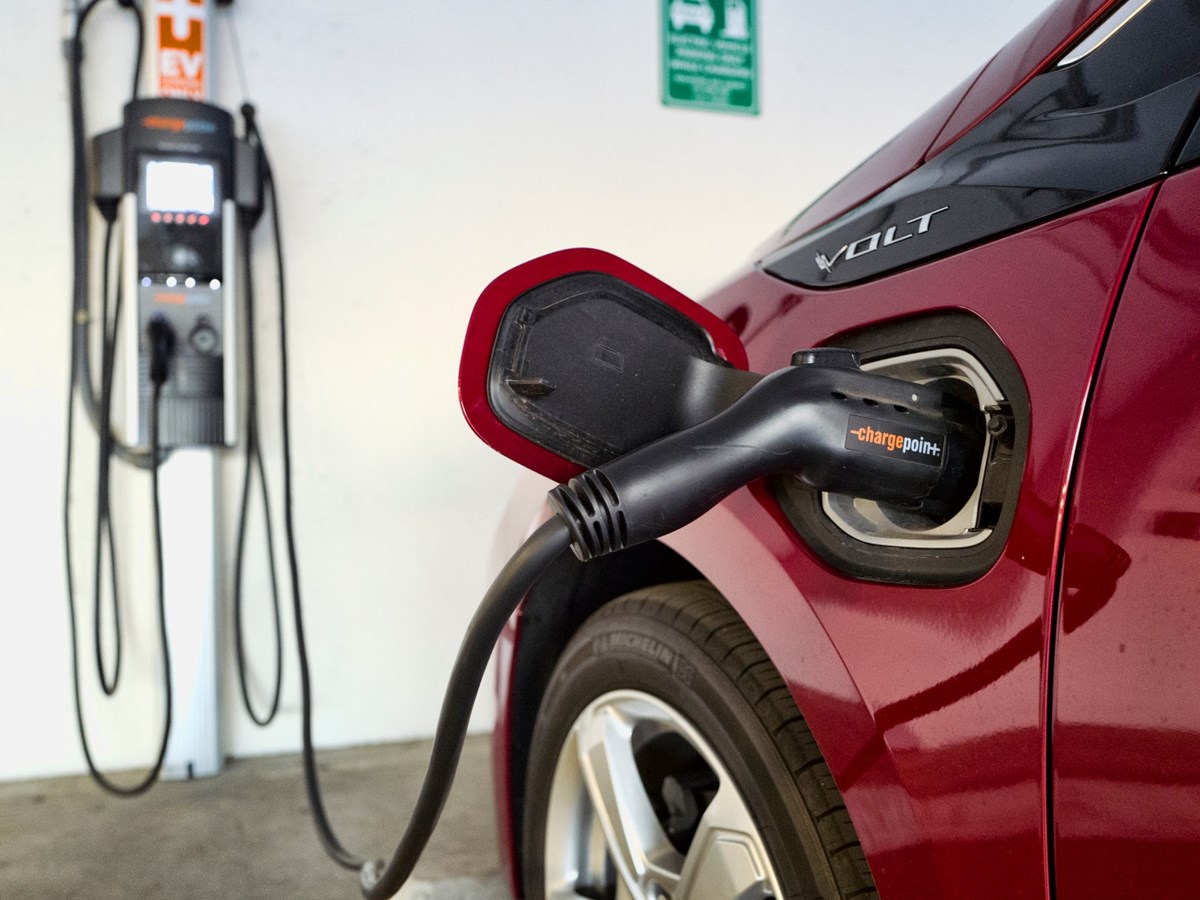 This Oct. 17, 2018, file photo shows a Chevrolet Volt hybrid car charging at a ChargePoint charging station at a parking garage in Los Angeles.

As Californians grapple with the increasing impacts of climate change, few things have come to be dreaded more than summer heat waves.

This year, the scorching temperatures arrived early, prompting the first power conservation advisory of the summer on June 17 and setting off speculation on social media about how the heat could impact electric car owners.

“California literally just told everyone to not charge their electric cars due to power shortage,” read a June 18 post on Facebook, which was shared more than 46,000 times. 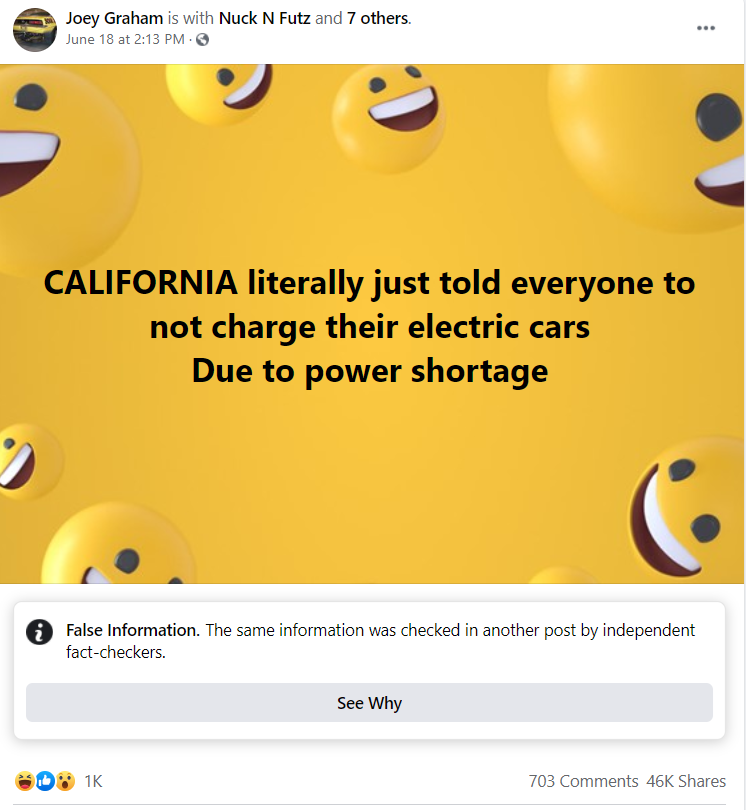 “So California just asked everyone to stop charging electric cars due to power outages … can’t make this crap up,” read another, posted on June 21.

There’s good news for electric car owners — the rumors are missing a lot of context and aren’t entirely true.

They also sparked discussion about whether California has the resources to continue to move toward electric vehicles in pursuit of a greener future.

“California can't provide enough electricity for the homes and businesses they have yet they're mandating everyone drive more electric cars,” read one post on Facebook. “I'm continually amazed at how stupid leftists can be.”

Facebook flagged the posts as part of its efforts to combat false news and misinformation on its News Feed, so we decided to investigate. (Read more about PolitiFact California’s partnership with Facebook.)

The California Independent System Operator, or CAISO, is the nonprofit tasked with operating and managing most of California’s power grid. It regularly issues power conservation advisories when the grid is facing challenging conditions, such as intense heat or wildfires.

The advisories, known as Flex Alerts, encourage Californians to shift their energy usage to certain times of the day when the power grid is less stressed.

“A flex alert is not a power outage,” said Gil Tal, director of the Plug-in Hybrid & Electric Vehicle Research Center of the Institute of Transportation Studies at UC Davis. “It's a way to prevent outages. We don't like that we are being told not to use electricity, but it's a much better situation than sitting in the dark if the grid is collapsing.”

Usually, the alerts ask that residents conserve power during evening hours, when people are still awake and using electricity but some energy sources, such as solar power, are not available.

“On a good day, solar in California can make up half of the generation,” said Severin Borenstein, a professor of business administration and public policy at UC Berkeley and the director of the Energy Institute at the university’s Haas School of Business. “And so when we start to lose it, we need to have other things. One of the problems that comes up on super hot days when the demand is very high is we may not have enough of the other resources to keep the balance in the system.”

In announcing the June 17 Flex Alert, CAISO encouraged people to voluntarily cut back their power usage from 5 p.m. to 10 p.m. The announcement included tips on how Californians could conserve energy and advised residents to complete tasks involving high amounts of energy, such as using large appliances and charging electric vehicles, before the alert to “be as comfortable as possible” during the evening hours.

The advisory never explicitly told Californians to not charge electric vehicles – just to shift their charging schedules, if possible, to accommodate limited resources in the evening.

“This is completely voluntary,” Borenstein said. “There typically aren't even financial incentives. It's just a plea and that applies to electric vehicles as well.”

How Electric Cars Get Charged

Today, there are just under 630,000 electric cars on the road in the Golden State, according to the California Energy Commission. Although they come in many shapes, sizes and models, all of them work similarly — drive, park and plug in as needed.

How long and how often electric cars need to charge depends on a variety of factors, including how far the car has traveled, what the car’s top range is and what type of outlet it is hooked up to.

“If you're plugging into a regular old household 110-[volt] outlet, it can take all night just to replenish a battery that's been driven 100 miles during the day,” he said. “Most houses that have charging have at least a 220-[volt] outlet and charge about twice as fast.”

But most daily commutes won’t completely drain an electric car’s battery. Data from the U.S. Department of Transportation’s Federal Highway Administration shows that residents of the San Francisco Bay Area traveled an average of about 20.7 miles per day in 2019. In Los Angeles, that number was 22.5 miles each day and in Sacramento, it was 22.3 miles.

So most modern electric cars don’t need to be charged on a daily basis, Tal said.

Many get plugged in every couple of days and are equipped with timers so that owners can schedule their charges. While electric car drivers might initially balk at power outages and conservation advisories, Tal said these events usually pose “no problem.”

“A Flex Alert is a couple of hours and there are very, very few electric car drivers that have to charge their cars in these specific few hours,” Tal said. “Most of the drivers today and in the future will be able to delay it by a couple of hours or a couple of days if needed.”

Does California Have The Power To Go Green?

As of 2019, renewable sources produced just over 30% of California’s power. In 2015, the state pledged to increase that number to 50% by 2030 and Gov. Gavin Newsom issued an executive order last year that requires all new cars sold in California to be zero-emission vehicles by 2035.

If everyone drove an electric vehicle, Tal said Californians would “double” their electric use in their homes. But change is unlikely to come quickly, and the current grid is able to support short-term increases in electric cars.

“We can have millions of electric cars on today's grid with no problem,” Tal said. “We have less than a million today and we can go to three, four, five million without doing any serious upgrades.”

In the long run, California’s power grid will need to produce and store more electricity to reliably make the shift to an entirely electrified fleet. But Tal said the process should be smooth if the changes happen “together.”

Borenstein said it’s not the first time the power grid has needed to adjust to emerging technology, comparing the shift toward electric cars to when air conditioning became popular in the 1950s. Over the years, the grid successfully scaled up capacity to accommodate energy demands.

Air conditioning units tend to kick in at roughly the same times because outside temperatures increase during the day and decrease overnight, which posed an additional challenge for the electric grid of the 1950s. Borenstein said electric cars will likely have an easier adjustment.

“I think that's where we're going,” he said. “We're not going to make it illegal to charge your car at any particular time, but it's going to be cheaper to charge it when the grid actually is more plentiful with electricity and more expensive when the grid is tight.”

Posts on social media claimed that California told electric car owners to “not charge” their vehicles because of a power shortage.

The posts appear to refer to a Flex Alert that was issued by the California Independent System Operator on June 17. The alert encouraged Californians to voluntarily conserve energy and charge their electric vehicles before 5 p.m. to minimize possible stress on the power grid during the first major heat wave of the summer.

CAISO officials never said people could not charge their vehicles. Rather, they asked that electric vehicle owners shift their charging schedule to accommodate limited energy sources in the evening.

Furthermore, experts say that most electric vehicles only need a few hours of charging each night and are equipped with timers so that owners can schedule charging periods, making it simple for Californians to voluntarily comply with the Flex Alert.

The posts also kicked off debate about whether California’s grid will be able to accommodate efforts to move toward electric vehicles in the coming years. But experts said the transition should be smooth as long as the shift to electric cars is coordinated with efforts to push for renewable energy sources and improve grid capacity.

Interview with Gil Tal, director of the Plug-in Hybrid & Electric Vehicle Research Center of the Institute of Transportation Studies at UC Davis, June 25, 2021

Interview with Severin Borenstein, a professor of business administration and public policy at UC Berkeley and the director of the Energy Institute at Haas, June 29, 2021