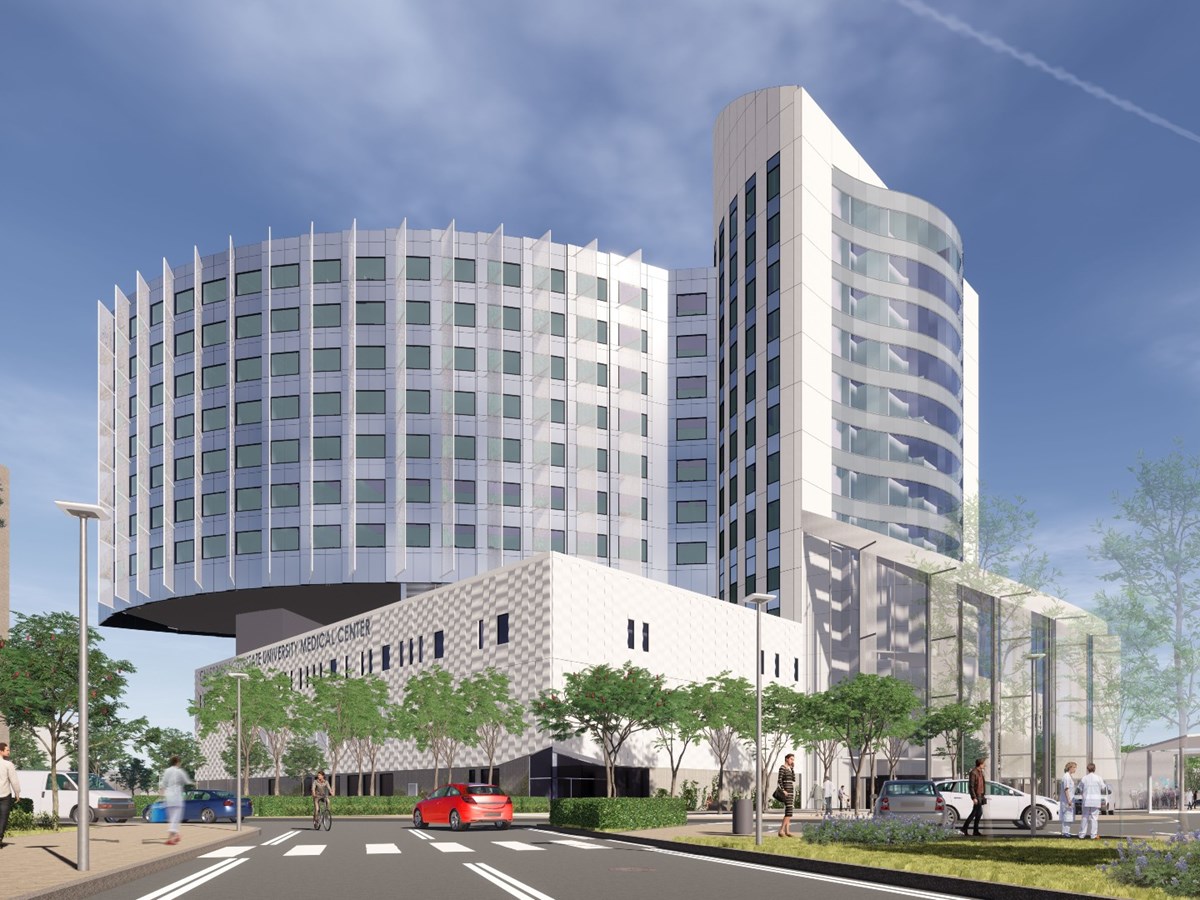 A rendering of the medical center and teaching hospital for California Northstate University planned for the former Sacramento Kings arena in Natomas.

The site of the former Sacramento Kings arena in Natomas will soon be turned into a medical center and teaching hospital for California Northstate University, according to the team and the city of Sacramento.

The team is donating the land, around 35 developable acres, to the university for the project, which is expected to open in three years. That leaves the team with 149 acres at the site.

“We have been working diligently with the Natomas community to find the right partner to redevelop the arena site and believe California Northstate University is the perfect fit,” Sacramento Kings Owner and Chairman Vivek Ranadivé said in a release. “With a medical school campus and teaching hospital, this project will serve as a hub of innovation and an economic driver for the entire region.”

Demolition of the arena should begin late this year.

The arena, at times known as the ARCO Arena or Sleep Train Arena, first opened in 1988. It hosted the Kings until April 9, 2016, when the team played their final game at the arena, beating the Oklahoma City Thunder 114-112. At the time, the arena was the fourth-oldest and second-smallest in the NBA.

Many other teams and events played at the site, including the WNBA's Sacramento Monarchs, who won the only pro-basketball championship in city history. The arena also hosted concerts and other events, and was used as a temporary COVID-19 surge hospital last year.

While the arena stopped being used in late 2016 with the opening of the Golden 1 Center downtown, the Kings have been looking for a potential use for the site since 2015.

“This announcement fulfills a promise to North Natomas to replace the former Kings arena with an employment center and economic engine both for the community and for the city as a whole,” said Sacramento Mayor Darrell Steinberg.

According to an economic analysis from Varshney & Associates, the California Northstate University Medical Center project is expected to generate $4.04 billion in regional economic output in the next 10 years.

City Councilwoman Angelique Ashby, who represents Natomas and has previously stated her desire for a hospital or medical center for the site, celebrated the moment.

“I am thankful for the Sacramento Kings for their partnership and commitment to attracting a generational economic engine and high priority tenant,” she wrote on Wednesday.

State Sen. Richard Pan, who Ashby is running to succeed in the Legislature, said Sacramento is “fortunate to have two accredited medical schools creating high paying jobs for our communities,” referring to the Centene health subsidiaries also based in Natomas.

California Northstate University was founded in Elk Grove in 2008. According to Elk Grove, CNU officials have said the university will keep its pharmacy school at the current site in Elk Grove. They also say CNU has submitted an application to the city to expand the campus to accommodate a new dentistry school.

“Elk Grove city leaders did everything we could to assist CNU at their chosen project location and present alternative locations and options for their consideration,” Elk Grove Mayor Bobbie Singh-Allen said in a statement. “Ultimately none of the options presented met their needs.

Singh-Allen said the city of Elk Grove will continue to support the Elk Grove campus, and "wish California Northstate University and the City of Sacramento every success."