Assemblywoman Annie Black removed her mask during a floor session on May 18 in this screen capture of the legislative live stream.

Nevada’s Legislature updated its rules on May 19 to allow fully vaccinated people to enter the building without masks in accordance with current guidance from the Centers for Disease Control and Prevention.

The next day Democrats, who hold a majority in the Assembly, voted to censure Assemblywoman Annie Black (R–Mesquite) for refusing to wear a mask in the chamber or confirm whether she had been vaccinated. As a result, Black was not allowed to vote or speak on the Assembly floor for four days.

“We were informed that there were persons who had not confirmed they were vaccinated, they were not wearing masks and so we complied with our rules,” Assembly Speaker Jason Frierson (D–Las Vegas) told reporters.

On Monday, Black formally requested permission to join the proceedings remotely. Her request was granted by a unanimous vote in the Assembly, but experts say the brief spat illustrates the influence conspiracy theories now hold over the Republican party.

However, the Legislature operates under protocols set by the political leadership of both houses.

Visitors and press who wish to go maskless are required to verify their vaccination status with legislative staff, who did not respond to multiple requests to explain whether lawmakers are subject to the same process.

Black claimed neither Democrats nor legislative staff gave her the chance to defend herself before the vote.

“They never confirmed if I was or was not vaccinated and then took action to strip my ability to do my job for the people that I represent,” she told CapRadio. “So I don’t know what I would apologize for. Not that I would.”

A day before the Legislature changed its rule, Black removed her face covering during a floor speech in which she called mask requirements on the Assembly floor “political theater.”

Then she defended her refusal to wear a mask on her personal blog by claiming the rule violated her privacy. In the same post, she also repeated conspiratorial claims that the government was planning to use so-called vaccine passports to curtail civil rights.

“No one knows if I’ve gotten the vaccine. And frankly, it’s nobody’s business but my own,” she wrote.

But those arguments don’t hold up, according to Truckee Meadows Community College political science professor Fred Lokken. He pointed to vaccine requirements at universities and schools as examples of how public health supersedes civil liberties in other contexts.

“It does not have the same privacy rights,” he said. “Nor does it carry the same constitutional rights that other things may carry.”

Lokken said Black’s refusal to either wear a mask or confirm her vaccination status — and her subsequent censure — appeared to be more of an “early campaign stunt” for 2022 than a principled stance.

“This is the sort of thing that will appeal to her base in Mesquite, I’m sure,” he said, referring to Black’s district where registered Republicans have nearly an 8 percentage point lead over Democrats.

The episode has also attracted national attention for Black, a freshman legislator who was in attendance at the Jan. 6 “Save America” rally that led to the violent insurrection at the U.S. Capitol. She's had a series of friendly interviews on right-wing radio, including with a host on Las Vegas-based AM670 who called Democratic leadership “Nazis” in a tweet. 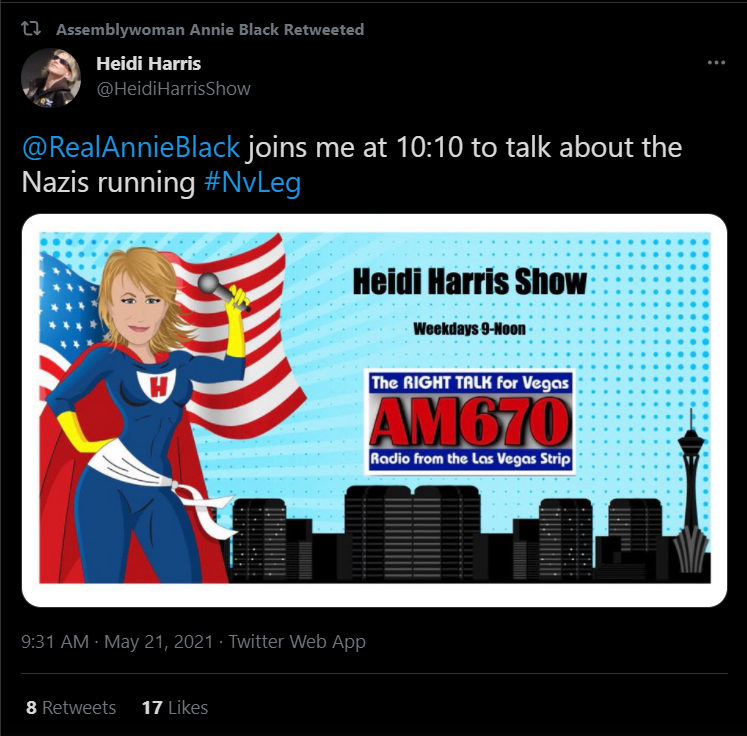 
Mike Rothschild, an expert on conspiracy theories and author of The Storm Is Upon Us, a forthcoming book on QAnon, says the vote to silence Black on the Assembly floor was a political victory for her.

“Conservatism has basically turned into this party of grievance, which is all Trump,” Rothschild said. “And she is now able to market herself as having been censored, having been canceled, that they’re afraid of her.”

That grievance plays into right-wing narratives that have sought to cast COVID-19 mitigation measures as infringements of personal liberty, Rothschild explained. Since the 2020 presidential election, those false claims have melded with other conspiracy theories. That includes QAnon, which claims wealthy Democrats are secretly involved in a cannibalistic sex-trafficking ring that targets children — a belief that has its roots in centuries-old antisemitic myths.

“What it’s becoming is just a sort of giant conspiracy theory that has a bunch of different elements to it. And some people will believe some of those elements and not believe some of the other elements, but it’s all just merged together,” Rothschild said. “It’s a sort of philosophy now that conservatism has really embraced wholeheartedly.”

Last week, three Republican members of Congress were fined $500 for refusing to wear masks in the House of Representatives.

Black has also tweeted her support for the #StopTheSteal movement, which echoes former President Donald Trump’s false claims that the election was rigged — a conspiracy also known as the “Big Lie.”

According to Rothschild, that adds up.

“I would be shocked to see an anti-vaxx, anti-mask Republican who is not also a stolen-election truther,” he said. “This is like a religion that doesn’t have holy books.”

While Black’s ability to vote and speak during floor sessions has been restored, albeit virtually, she continued to strike a defiant tone in a blog post about the reversal.

“It’s not about health. It’s about control,” she wrote to supporters, while insisting she had not disclosed to her colleagues whether or not she’d been vaccinated.

But to Lokken, the safety measures make a lot of sense for a public body tasked with setting state policy.

“The legislature cannot afford any kind of a COVID outbreak with just a few weeks left in the session,” he said.