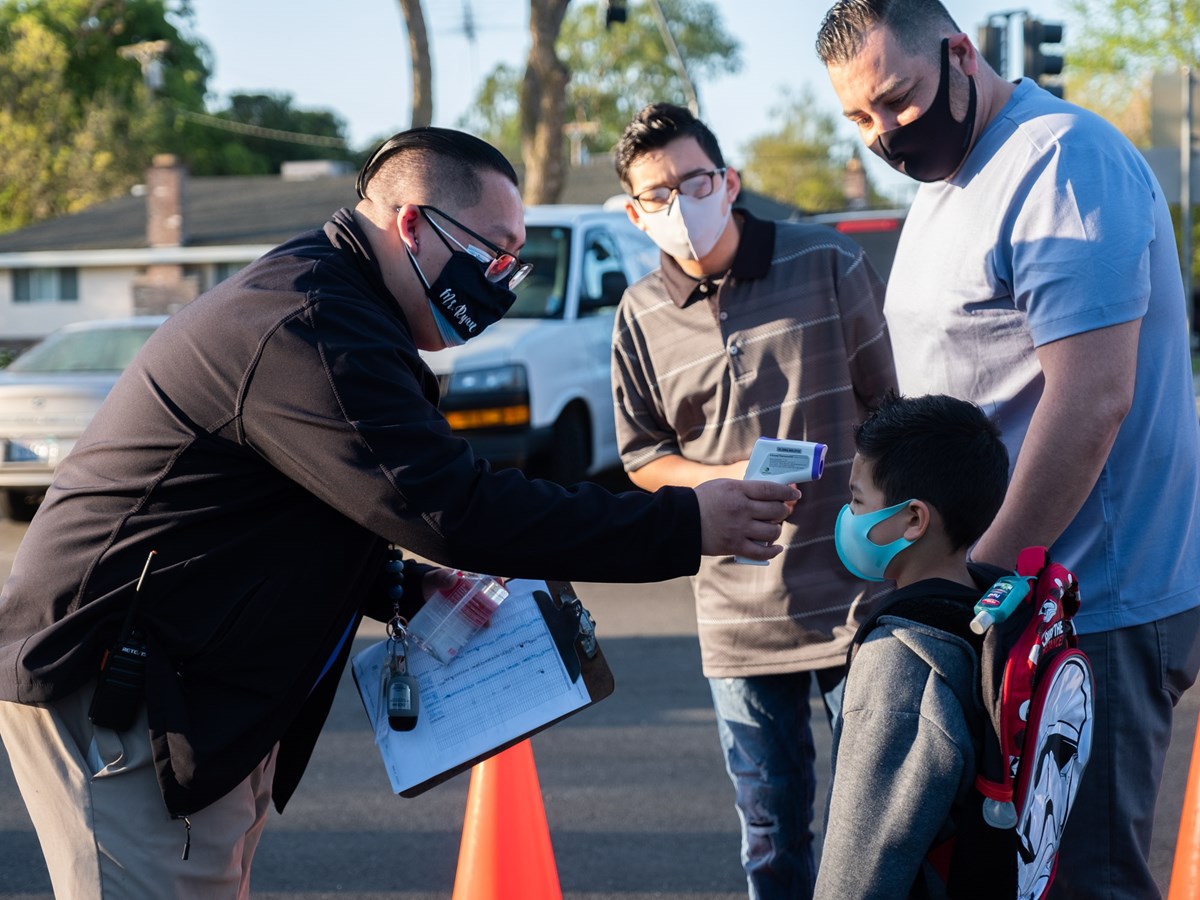 A year after the pandemic’s onset, what are the experiences, perceptions, concerns and hopes of people living in California’s capital region?

The latest COVID-19 Resilience Poll released on Monday offers insight and clarity on a variety of issues related to living in this time of the coronavirus, from jobs and schools to racial and class inequities and paths forward.

A project of Valley Vision and CapRadio, in partnership with the Institute for Social Research at Sacramento State, the latest poll is the third in a series that began in May 2020.

“We were really excited to be able to kind of jump into action a little over a year ago,” said Valley Vision CEO Evan Schmidt. “We had this really great tool that we could use to understand what those experiences are and track them over the year. And so that has been the COVID-19 Resilience poll.”

The survey, sent out three times over the course of the year, reaches up to 2,000 people each time across a six county capital area region. Respondents are demographically representative of the region as a whole.

The latest polls findings reaffirm what we’ve seen in previous surveys. Low-income workers and residents of color have been impacted more severely during the pandemic. Young people are more concerned about employability. There continues to be disproportionate access to mental health among Black and Latino residents.

There are also new challenges, including nearly 40 percent of respondents indicating they would probably not or definitely not get a COVID-19 vaccination when available.

What were the key themes that you saw throughout the year?

Now, well, first of all, I'll just note that through the course of doing the survey work, we got back really bleak data, to be quite honest. We saw a lot of hardship throughout the region as we were doing the surveying ...

We saw a lot of income loss in our latest survey. We saw that 41% have experienced some level of income loss. So that's been a significant impact.

And then, when we look at those people who have experienced income loss, we see a lot of hardship and being able to afford basic necessities. ...

We saw a lot of disparities of impact. So when we look at it kind of across our different subpopulations, different people were impacted in different ways. People of color often had the most intense impact. …

And we also saw disparities of impact in younger people. Our younger age demographics were impacted more intensely and often our lowest wage earners also felt the impacts more intensely. We saw a lot of mental health and mental and emotional health impacts that included an increased level of stress and anxiety, increased levels of depression and hopelessness.

We also asked questions about concerns about substance use, concerns about violence in the home, and concerns about the well-being of children in the home. And we saw really high levels across all of those measures, much, much more so than what you would see in a typical year. And again, we saw disparities across populations. So for people of color in particular, these measures were higher.

A lot of changes to the workplace. As we all know, a lot of people went to remote work. Of course, there was a spike in that. But then when we asked questions about what do you want to do coming back from the pandemic, a lot of people would like to stay remote. So I think it's going to be interesting to see what starts to happen as we go back to normal and workplaces stay more remote.

And then the other thing I would highlight is the toll that this has taken on parents and children and the effects of remote education. So we've seen that more than two-thirds of parents are worried that their children are falling behind academically. Parents were most likely to have lost income as a result of the pandemic and really saw high levels of challenge in parent’s ability to continue to do their job for the pandemic.

Those were some of the key findings that we saw. And those themes were really consistent throughout the year.

What you're describing with data is what I think a lot of us have experienced. And so you're actually putting numbers and research confirming what we already feel was happening in our communities and in our neighborhoods across the greater Sacramento region.

I agree. And I think also it's really consistent with research that we've seen across the nation, but I feel like pulling it here in the region and being able to pull out those numbers specific to our communities here really kind of brings that data to life and really demonstrates that this is very real right here where we live.

It also just leads me to think about the long-term effects or demographics that were hardest hit during the pandemic. When looking at your study and your research, you had quotes from people that participated in the study.

One of the most striking ones — and sobering ones — was an individual who saw their job cut pay. This individual had eight years of experience with the company, had a master's degree and now is struggling with where they will work in the next six months with any semblance of a comparable income.

I think that was a common sentiment that we saw across those open-ended questions, and I also think it ties into something we saw particularly among the younger demographic in our study, which is people [were] financially set back. One of the questions we asked was about paying back debt and young people in particular have not been able to pay back debt during this time. So that's a potentially long-term setback that people are going to see.

But then, when it comes to employability, I think you're right. There's been so much uncertainty and people still don't know what it will look like coming back. In particular, younger people are worried about their employability. So not just about the availability of jobs, but also thinking about the relevancy of their own skills.

I think this has been a point in time that has accelerated some changes to our workplace that are already there. And this created not only short term financial hardship, but a lot of uncertainty moving into the future.

You mentioned vaccinations. What have you gathered on the topic of vaccinations in the greater Sacramento region?

We asked a number of questions about this in our latest poll. And one thing that we learned is that about 40% of our regional population has said that they either will probably not or definitely not get a vaccine. So when we hear about vaccine skepticism across the nation, that's definitely happening here in the region.

When we look at some populations and kind of zero in an hour on different populations and how they feel about vaccines, we saw that there's a political lens to it. So Republicans are the most skeptical about vaccines compared to independents or Democrats. African Americans, if you look at it from a racial lens, are the most skeptical. And that really tracks with some data and information about historic mistrust and mistreatment of African Americans in the medical system. And then those making less than $30,000 a year [are] also the most skeptical.

Vaccines are really key to us getting back to normal and opening up our communities. I think educational programs and outreach for specific populations that are very targeted by trusted messengers will be really important in terms of increasing trust in the vaccines themselves.

And you mentioned the poll reveals bleak findings and there are long-term impacts of these findings and to our community. But how do we apply what we've learned with data to actual recovery across our region?

There's kind of a whole bunch of things around what I would just call recognizing our common humanity as we think about recovery. I mean, first of all, we know that there has been really severe mental and emotional health setbacks this year. And so as we heal from that trauma in our communities, it's important to make sure we have systems in place to care for people and to and to make sure that people are supported as we're coming back.

We also saw trends this year around misinformation. We saw throughout our poll a high level of distrust, whether it's government or media. And a high level of disconnection. I mean, that's just been part of the pandemic. A lot of us have been really disconnected from loved ones. ... So, I think really looking at how do we create meaningful connections when we can truly see each other's common humanity and try to move past some of the distrust that we've experienced throughout the pandemic will be really important. …

I think another lesson we can take is this thinking about young people, both young adults who are launching into adult life and students who have been educated remotely for oftentimes a good part of the year or so. As we come back into our educational systems next year and as we think about supporting these young adults, putting some extra support systems in there to make sure that they're well-cared for.

And then finally, I would say learning from the places where we've seen significant systemic change. I mean, we've seen big institutions turn on a dime to do really incredible things. That's moving to remote education. There's been a lot of increased services to help feed people. Those who are experiencing homelessness have had more support systems or more supports in place through government and other community services. In the last year or so, we've learned that we have the ability to do these things.

I think the question is, ‘Do we have the will to do them and how do we sustain that?’ I think there's a lot of lessons to learn about how are we able to change those systems and then really thinking about how can we sustain the changes.