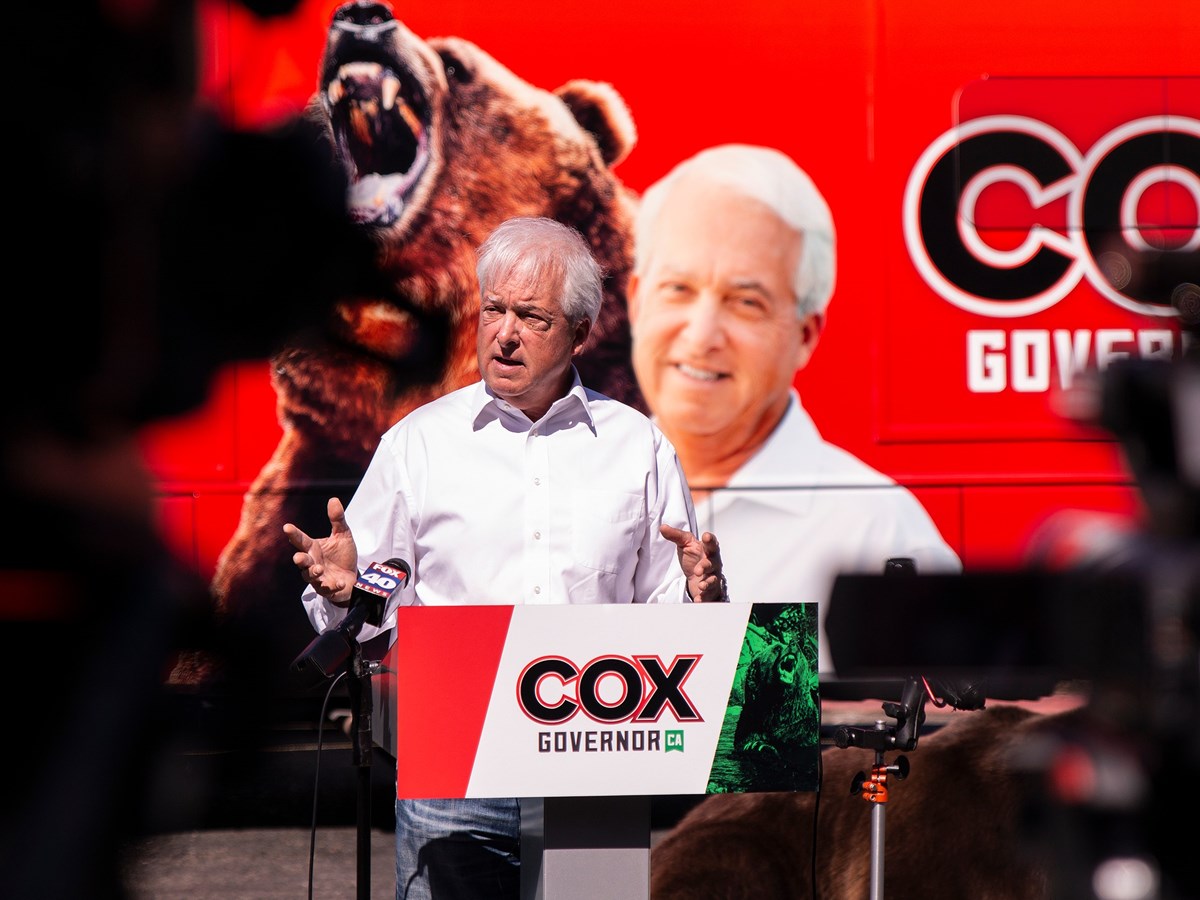 Republican recall election candidate John Cox cozied up with a live, 1,000-pound Kodiak bear and branded himself as “a beast” at his campaign kick-off event in Sacramento on Tuesday, before criticizing Democratic California Gov. Gavin Newsom over his handling of the pandemic, power blackouts and housing crisis.

But Cox also made a wild — and beastly — falsehood: He claimed Newsom had just released tens of thousands of inmates onto the streets.

That’s simply not the case.

"[People] don't want to live in fear of fires, or live in fear of rising crime. I mean, [Newsom] just let 76,000 inmates out of jail with almost no warning,” Cox said at the event, as the bear named Tag, who has appeared in movies and TV shows, alternated between lying down and pacing.

“Many of those are going to commit other crimes. I mean, what are we going to do, then I want my daughter to feel safe. I want everybody to feel safe,” the candidate added.

We fact-checked Cox’ statement that Newsom “just let 76,000 inmates out of jail with almost no warning.”

Late last week, the California Department of Corrections and Rehabilitation expanded a controversial program that allows prison inmates to shorten their sentences in exchange for good behavior and participating in rehabilitation. The agency cited its authority under voter approved Proposition 57 to create new opportunities for good behavior credits.

Democratic state lawmakers support such efforts, while many Republicans lawmakers do not.

Cox is correct that the move was done with little public notice. But the rest of his statement distorts reality.

The credit expansion allows 76,000 prisoners, including some violent and repeat felons, to potentially reduce their time served by one-third instead of one-fifth under the program, which has been in place since 2017.

“These changes do not result in the automatic release of any incarcerated individual,” Dana Simas, a spokesperson for the state prisons agency, wrote in an email. “This is NOT an early release program, this is an expansion of Good Conduct Credits that the population must earn through participation in rehabilitative programs and sustained good behavior.”

Simas added that it will be “months or years” before any inmates are released as a result of this initiative.

We contacted the Cox campaign and did not hear back.

The San Diego County businessman is one of several Republicans running in the election to recall Newsom.

The California secretary of state's office announced late last month that supporters of the effort had collected enough valid signatures to force the recall, which is expected to take place this fall. Voters will have the option to select whether they want Newsom to remain as governor and to vote on a potential replacement.

Over the past decade, California has sharply cut its prison population following a 2009 U.S. Supreme Court order for California to reduce prison overcrowding. The population reached a peak of 163,000 inmates in 2006, according to the Public Policy Institute of California.

In 2014, voters reduced penalties for property and drug crimes. Two years later, they approved allowing earlier parole for most inmates.

Before the pandemic hit, the prison population had dropped to 117,00 inmates, the Associated Press reported this week. In the last year, 21,000 more have left state prisons — with about half being held temporarily in county jails.

Last year, California sped up the release of 3,500 inmates to reduce crowding as COVID-19 spread through prisons statewide, according to the Los Angeles Times. It freed 2,345 others early last July.

His statement distorted the credit program and suggested the release of inmates was imminent.

“Just when you think California couldn’t enact more idiotic policies, the politicians in Sacramento are now putting children and families in danger by releasing tens of thousands of violent criminals into our communities,” the Garcia press release said.

The California Department of Corrections and Rehabilitation expanded a good behavior and rehabilitation program that will make 76,000 inmates eligible for somewhat shorter sentences. The agency made this move without much public notice, but did so using authority granted under voter-approved Proposition 57.

No one has been released under the expanded program and officials estimate it will be months or years before that happens.

We rate Cox’s statement as False.