Almost all of Sacramento’s $89 million in federal coronavirus aid has now been spoken for. City council voted Tuesday on how to allocate its final chunk of the money, which was divided into categories for small business assistance, tourism and the arts, workforce development and homelessness services.

Sacramento Mayor Darell Steinberg had said when coronavirus aid was first given to the city that he wanted the money to have a focus on helping the city’s underserved communities, and that he also wanted funding to be used to help nonprofits that had been in line for Measure U sales tax funding.

“It’s a significant achievement what we have done thus far to intentionally decide we’re going to spend this money on and in our community and then to execute it in the way we have,” Steinberg said during Tuesday’s council meeting.

The categories for funding were mostly divided evenly. The city will allocate $20 million for the arts and tourism, $18.7 million for youth and workforce development programs and $15.6 million for homelessness and rehousing solutions.

In smaller quantities, the city allocated $10 million for police, fire and “citywide operational costs,” like implementing teleworking for city workers, and disinfecting city facilities. Another $4.6 million will go towards social services, like daycare for essential workers and outreach to hard-to-reach populations.

The largest chunk of federal funds — $22 million — will go towards small business assistance. The majority of this money is slated to soon be distributed in a second round of small business loans to 1,347 businesses. Assistant City Manager Michael Jasso said this round of funding brought in a more diverse pool of business owners than the city’s original round of loans, which mostly went to businesses in the central city. 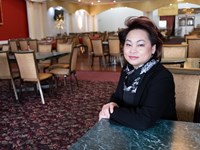 Sacramento Offered $1 Million In Loans For Coronavirus Relief. Businesses In Underserved Neighborhoods Didn’t Get Much.

“So, for instance, we had a preference for businesses on our commercial corridors, we wanted to make sure it was focused on our underserved communities, so we were more deliberate about things like that,” Jasso said.

He said there were fewer restrictions on the loans during this round. During the first round, the city required that businesses who apply have a brick-and-mortar store. This time, they were open to small businesses that operate without storefronts. Jasso said another factor that helped with bringing in a greater diversity of applicants was that the application was open for longer and was not done on a first-come, first-serve basis.

“We definitely reached communities that we didn’t reach the first time, but we also realize we probably weren’t able to reach some communities partially because there’s loan fatigue out there,” Jasso said. “And then the other is the sad reality that there are probably businesses that realized they probably wouldn’t be coming back.”

Of the nearly 1,400 small businesses that did receive loans this time, about 30% were located in the central city, as compared to the last loan distribution where over half were located in Midtown or Downtown. There was also a greater diversity in business owners, with 30% identifying as Asian or Pacific Islander, 14% as African American and 11% as Latino.

But Cathy Rodriguez Aguirre of the Hispanic Chamber of Commerce says while this is a good start, they still suspect there may have been barriers that left Latino business owners out.

“It definitely could be stronger as far as the outreach, but the efforts made the second time around are much better than the first time for the million dollars,” Rodriguez Aguirre said in reference to the city’s first round of loans. But she believed more Latino business owners would be able to apply if a third round of loans were made available. “We’re hopeful for the next round we’ll see a little more,” she said.

Rodriguez Aguirre explained that cultural differences in the Latino communities also created barriers for the loans.

“Culturally, we’re going to be by our bootstraps and we don’t want to take government assistance,” she said, adding that overall in immigrant communities, there’s often a reluctance and fear around taking a loan and not being able to pay it back. “And there were some that I spoke to and it’s like, you were rejected from a first date, so you don’t apply the second time around. There were some businesses who applied, and they didn’t make the cut and so were a little gun shy about doing it the second time around.”

Overall, Latino-facing organizations received around $10 million of federal coronavirus funds. Councilmember Eric Guerra said he saw this amount as a “downpayment” and “starting point” for future efforts to help a community that has been hit particularly hard by the pandemic.

“We saw the COVID cases rise dramatically, and we also saw the tragic unemployment and struggles that many of the families were having,” Guerra said. “And we saw the distinct challenge of being able to communicate with our diverse community.”

He and others will be looking at ways to better disseminate information about coronavirus aid and safety precautions to the community with the money allocated.

“This effort is to address all those efforts, and more importantly, we’re saying this is a downpayment, and we’re expecting a higher commitment from not only our local but state leaders on this effort,” Guerra said.