How To Make (And Celebrate) A Podcast With A Community

Pop quiz: Where in Sacramento can you fill up your lunch plate with Salvadoran pupusas, Polynesian lupulu, and a traditional Hmong peev choj noodle dish?

Answer: Nowhere! Unless that is, you went to CapRadio’s wrap-up party for the “Making Meadowview” podcast in South Sacramento in December.

Nearly 250 people filled the auditorium at Rosa Parks K-8 school on a Saturday afternoon. They networked with community groups at 25 informational booths, watched five international dance performances by local kids, and listened to presentations about the history and future of Meadowview.

It was all CapRadio’s way of celebrating (and sharing) the six-part documentary podcast called “Making Meadowview,” which profiled community leaders tackling big neighborhood problems in South Sacramento. It was a year-long project, born through a process of relationship-building with Meadowview residents.

Before CapRadio started reporting the podcast, Senior Community Engagement Strategist  jesikah maria ross organized “listening sessions” and community fairs with Meadowview residents so that CapRadio could build upon their expertise, understand their community better, and hear their desires for how they could better be represented by media (check out this video from one of the listening sessions).

Meadowview was in the national media spotlight after the 2018 police shooting of Stephon Clark in his grandmother’s backyard in the South Sacramento neighborhood. And even before that, local Sacramentans referred to the area as “ghettoview;” a place where you wouldn’t want to live.

Sacramento Mayor Darrell Steinberg attended the CapRadio community celebration. He said Clark’s death was a tragedy, but the CapRadio podcast project shows that beautiful things have come out of the aftermath.

CapRadio’s "Making Meadowview" project shows that the South Sacramento neighborhood “has many more strengths than it has difficulties,” Steinberg said, such as the many leaders working to improve future prospects for the young generation.

“My heart is full of gratitude that ... some major organization in our community chose to work with the community to show what's good and great, not just what is challenging and difficult,” he said.

Dozens of young dancers presented five distinct cultural dance performances in full costume. They included traditional numbers from the Hmong community, lively moves from the Pacific Islands of Tonga, and folklorico from Mexico. 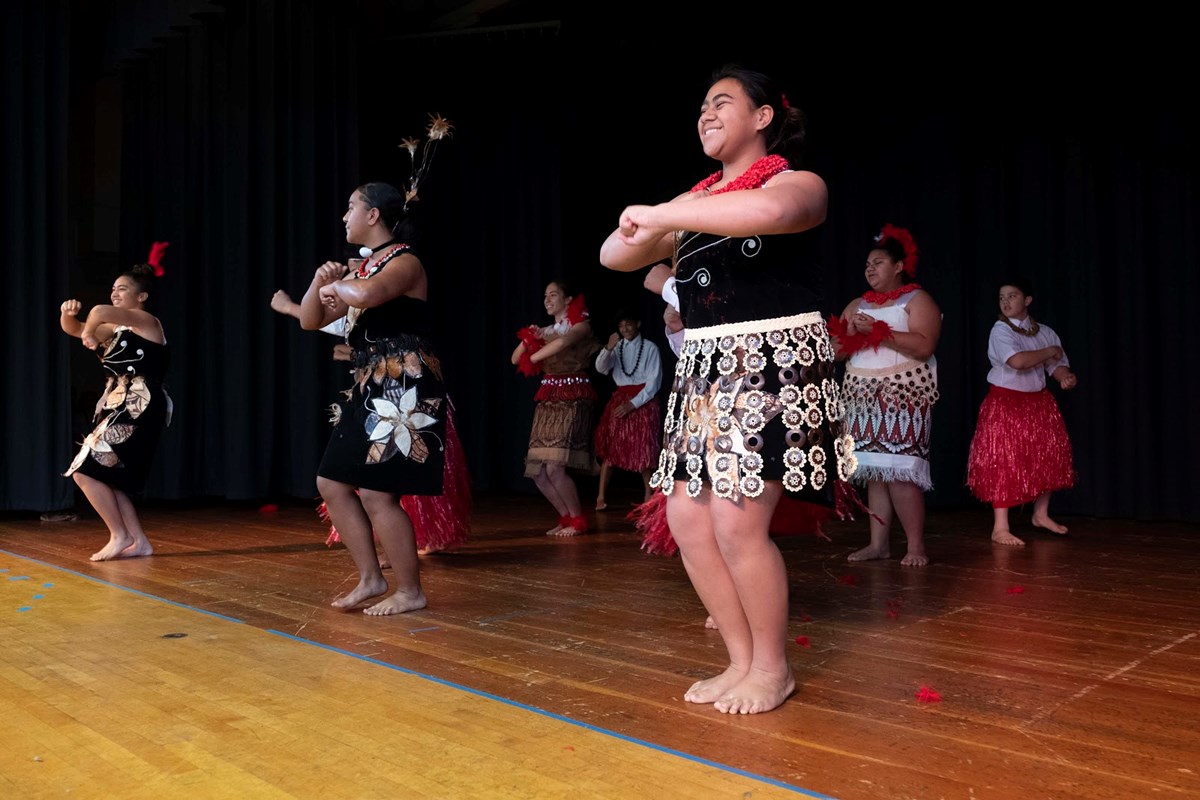 Members of TOFA, a Sacramento-based organization that works with Polynesian youth, perform a traditional dance from the island nation of Tonga at the "Making Meadowview" podcast party.Andrew Nixon / CapRadio 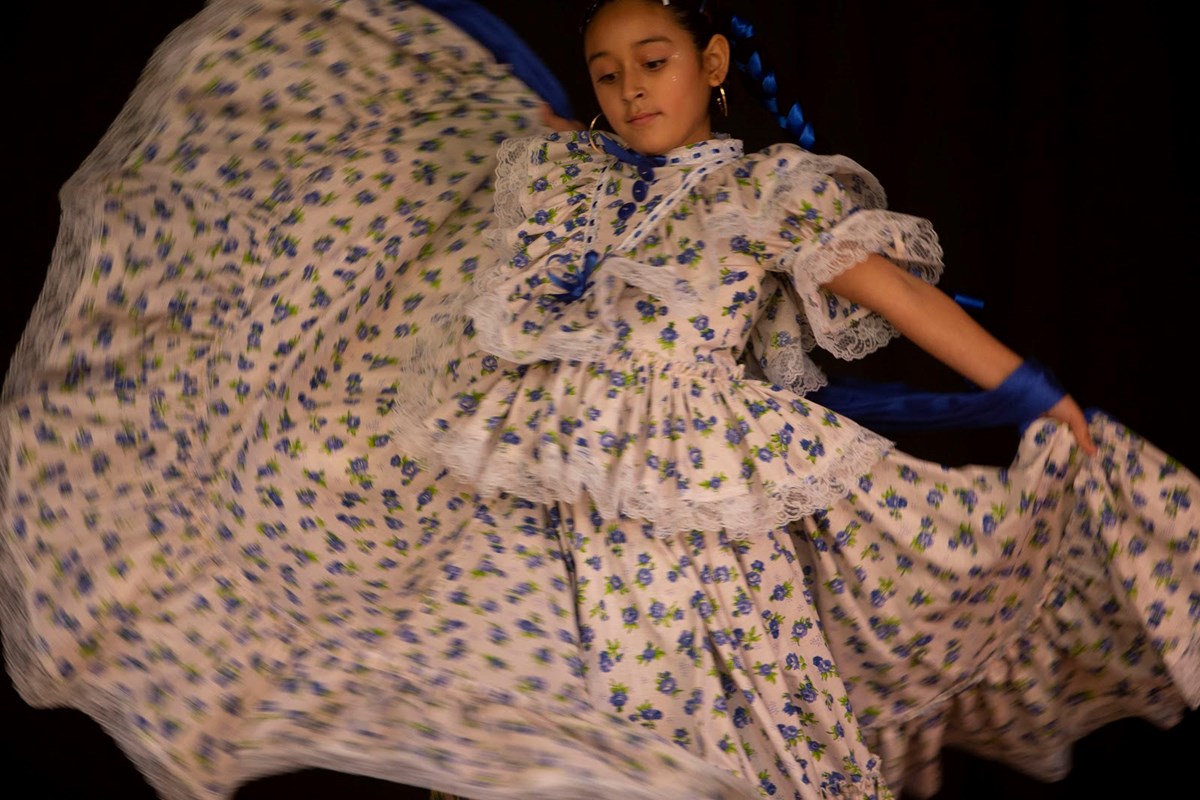 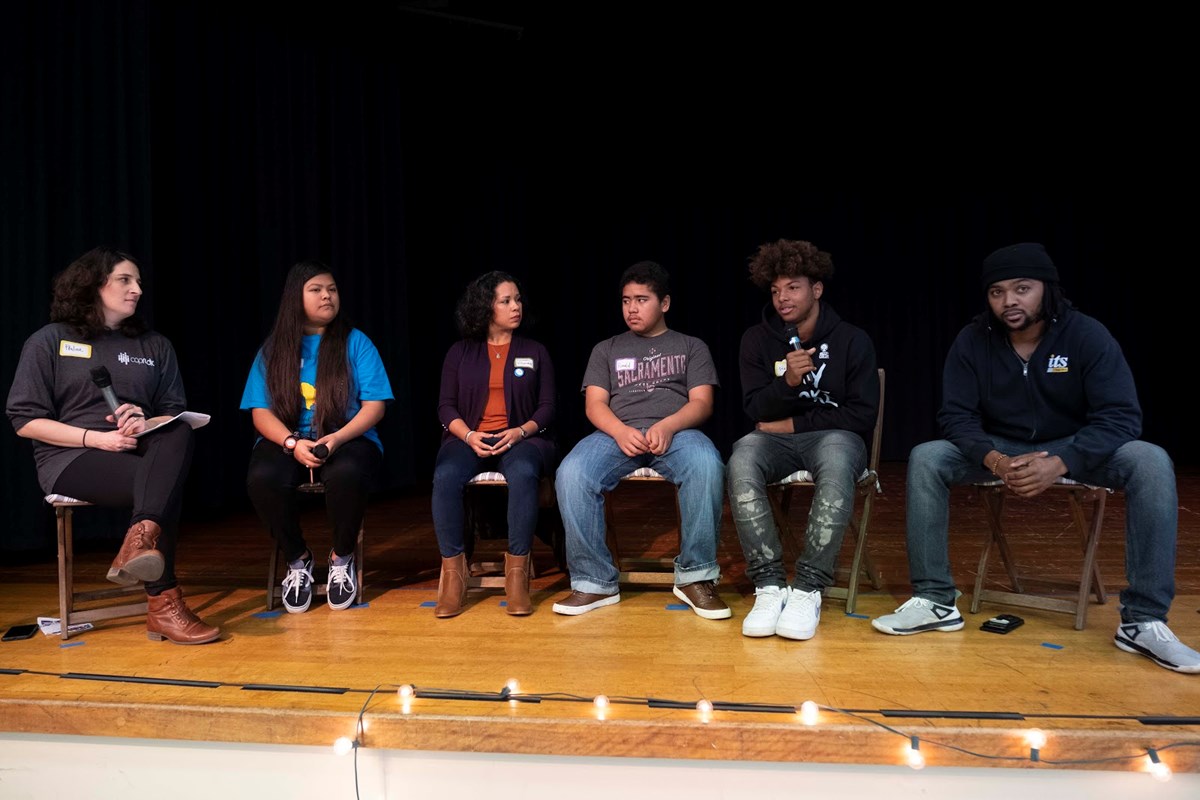 During a panel discussion about supporting the youngest generation in Meadowview, Rosa Parks seventh-grader Ronald Miah Lavulo (third from right) announced that he would like to attend college, and adults should help him do that.Andrew Nixon / CapRadio

Party participants told us they appreciated the performances and focus on youth leadership.

“Motivating the youth is top priority,” wrote one anonymous attendee on an evaluation form. “They are our future.”

The podcast itself helped educate residents and the larger Northern California community about the challenges — and wisdom — of the South Sacramento neighborhood that shook from the 2018 police shooting. Those stories include:

Newcomers: How a large Pacific Islander community came to settle in Meadowview, and what elders did to steer young people away from street gangs.

Foot Patrol: A Meadowview-area police officer named Dan Ware won the trust of the community by patrolling on foot and serving as a role model for neighborhood kids.

The Man Of Meadowview: Lamajhe Miles’ high school football talent could launch him out of Meadowview. But will his grades, home life, and the neighborhood hold him back?

Healing from the Crack Epidemic: RoLanda Wilkins is trying to repair the intergenerational trauma of the crack epidemic by empowering local teenage girls.

Welcome to Margaritaville: Margarita Chavez is on a mission to beautify her neighborhood. And she’s enlisted Meadowview residents and city workers to join her.

Stepping Up To The Dais: Mai Vang is a rising political leader in Meadowview. But how can the first generation Hmong-American make her way to the top, when she’s committed to working for those at the bottom?

At the event, we heard heartening feedback about how the podcast has reverberated throughout Sacramento.

RoLanda Wilkins, of Earth Mama Healing (and featured in episode 4), said listeners thanked her for being outspoken about the lasting impact a decades-old crack epidemic has had on black families.

“It really [shows] what healing looks like when you talk about things...that may be a little rough. I think that improves our life expectancy... and allow[s] us to be present in a different way,” said Wilkins. 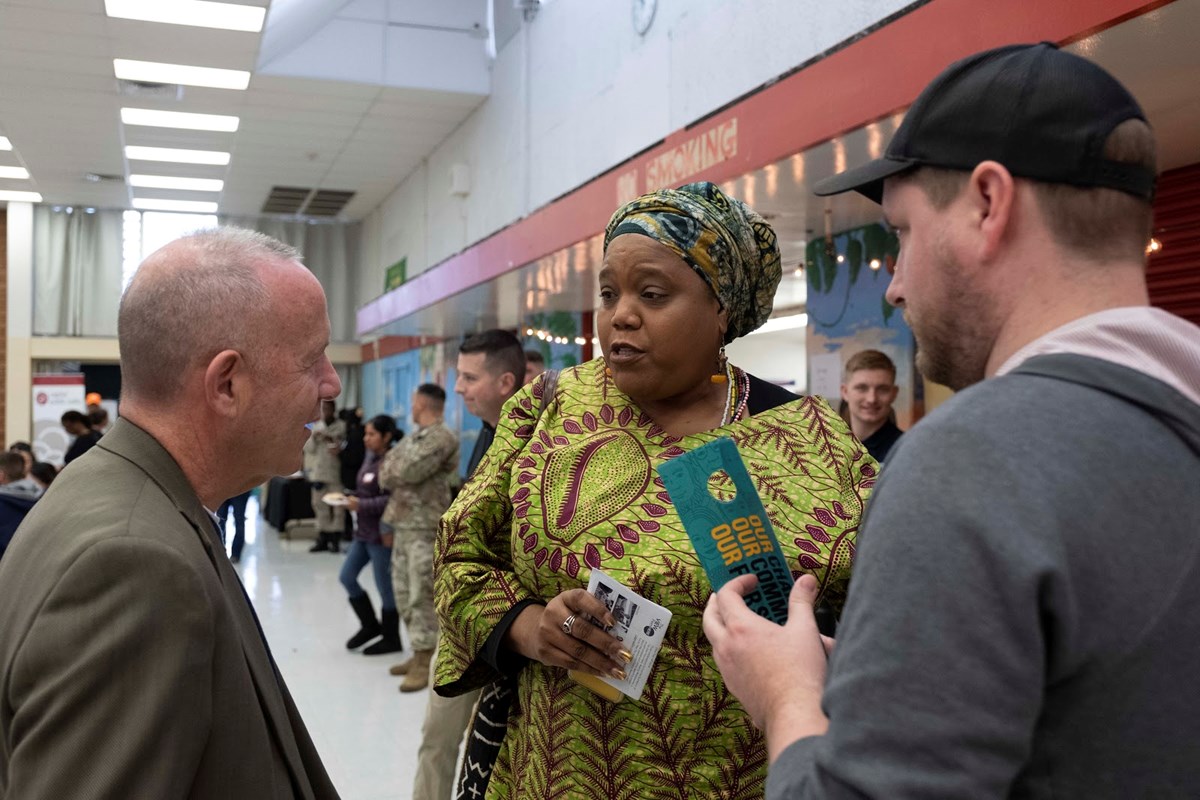 Danetta Ware Jackson was moved by the episode about her father, one of Sacramento’s first black police officers (whose story is in episode 2). She thought people outside Sacramento should hear the story about how his strong relationships with community members created trust.

“It's extremely important for people to hear his story,” she said about her father, Officer Ware, who people described as more interested in “correction rather than punishment.”

“We've had many challenges with police and killings. I think there needs to be some reform in that area,” she said.

Jackie Rose of the Rose Creative Empowerment Center, which provides after-school cultural activities for young people in Meadowview, was a panelist at the event. She said she would use the podcast for future educational efforts.

“All the way from the elders to the young people are being heard in that podcast,” said Rose. “That's what really this is about, is for us to pass this legacy on to our young people, for them to carry the torch to the finish line.”

Even podcast interviewees such as Margarita Chavez (episode 5) said she learned from the audio stories. She said she knew there was a Pacific Islander community in her neighborhood, but she didn’t know much about their culture, why they came, or how they’re doing gang prevention work.

Lamajhe Miles’ constructive feedback about his story, Man of Meadowview, showed how he was forced to think more about his future through the process of being interviewed over six months.

“There's multiple things that I can do in this world ... to make it out [of the ‘hood],” he said, about how the story focused only on his football talent. He says he has multiple interests and talents, such as basketball and rapping. 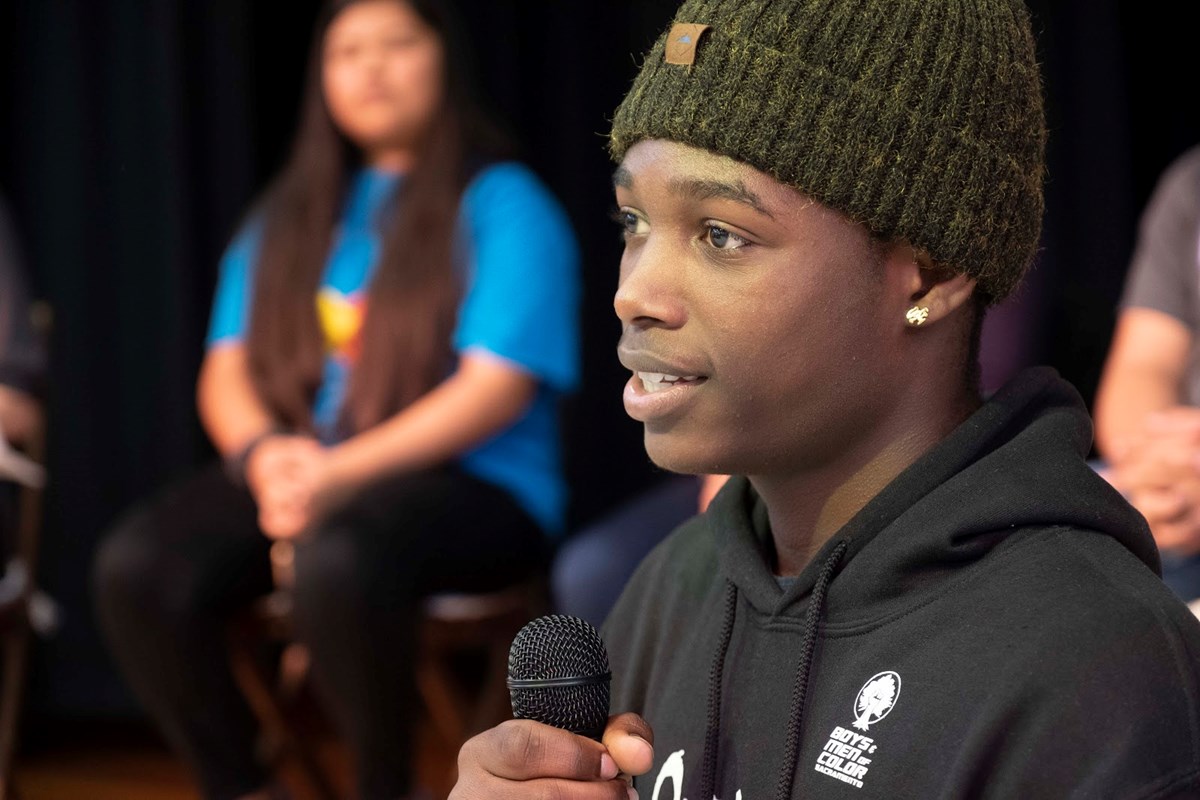 Overall, he said, being the subject of an audio documentary “was a cool experience.”

Miles’ mom, Shakita Brown, appreciated the podcast because it showed “the struggles” in her community, something CapRadio listeners may not have known before.

“Everyone got to hear, authentically from individuals like my son [who] actually goes through it on a day-to-day basis,” she said. Hopefully the podcast “really does make a change,” she said.

Through the planning process, Rosa Parks K-8 school staff was introduced to Fresher Sacramento, a Meadowview-based food business that serves affordable, healthy food to lower income residents. Now, the local food business has a contract to serve at the school’s family nights. And over the 2019 holidays, Fresher Sacramento delivered free meals to 30 Rosa Parks families.

“It [was] a bigger connection than just the event,” said Amaya Weiss, a student support specialist at Rosa Parks school.

At the podcast party, 45 people filled out surveys. Almost all of them (96 percent) said they learned something new about Meadowview, and the vast majority of respondents (86 percent) said they felt more connected and motivated to improve the neighborhood.

“I love being able to make connections and learn more about the community and community resources,” someone else wrote. 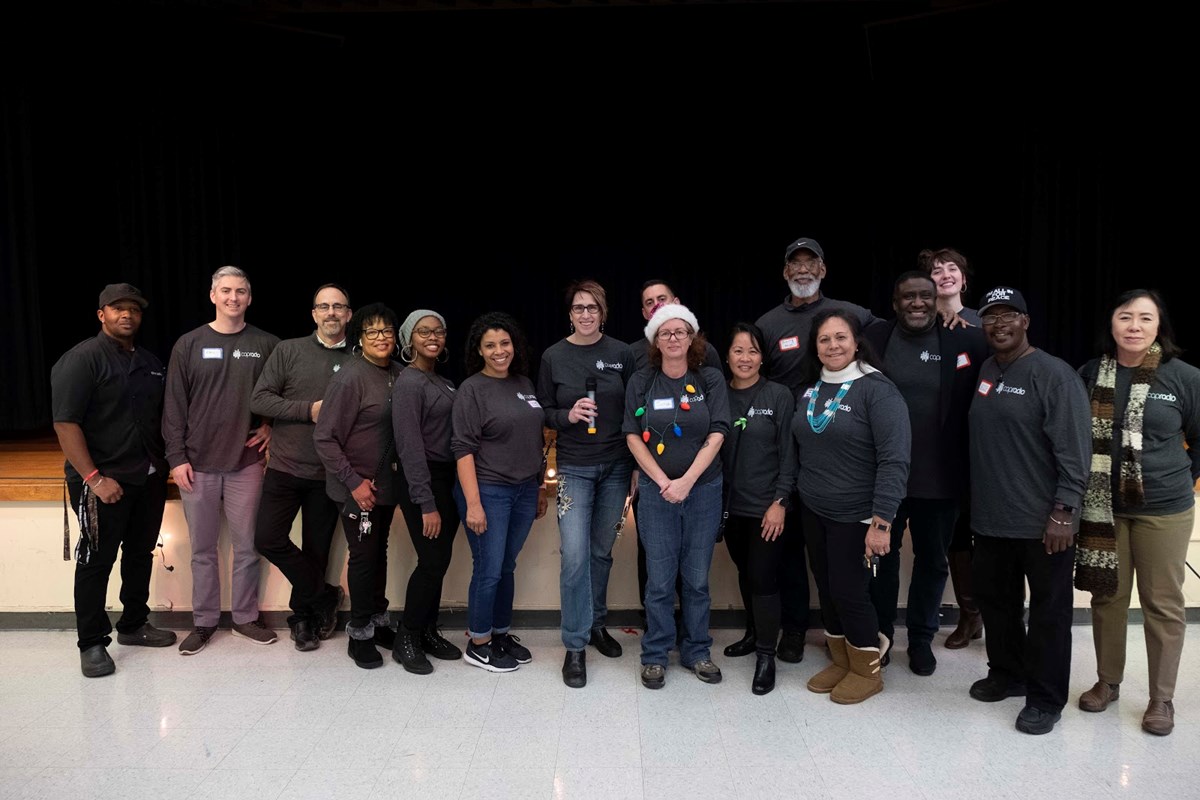 Special thanks to the Meadowview Coordinating Committee, a group of neighborhood leaders, educators, and cultural workers that CapRadio convened to help design and host the culminating event.