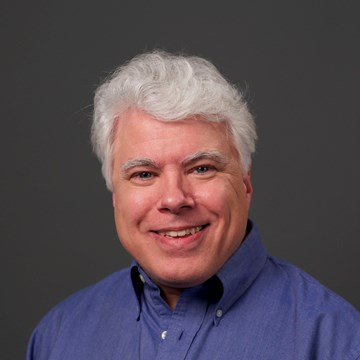 Mark Jones had his first cablecast "radio" show in high school. As a college student, he managed station KCHO in Chico before joining the fledgling KXPR (as a technician and producer) in 1979. As a reporter for Capital Public Radio and NPR, Mark has interviewed best-selling authors, scientists, and circus roustabouts.

Mark has worked in almost every department at CapRadio, and currently engineers most of the stations' special, live productions, as well as working on Insight. He also edits Stephen Peithman's Connections program. Mark's interest and experience in theater contributed to his work on CapRadio's long-running Musical Stages program (produced and hosted by Peithman).

Mark's wife and dogs think he's absolutely adorable. He once owned a dog who could do back-flips, and a hound dog diagnosed with the problem of "extreme cuteness," which was unfortunate, given that she did not want to be petted by those to whom she had not been properly introduced. Mobius, who's half Rottweiler, is now in charge of security at the Jones household.