At this past weekend’s California Democratic Party state convention, some attendees put on headphones, entered a dark room — and listened to the sounds of sexual harassment.

"Where you goin’? Where have you been all my life? Hey, hey, I'm talking to you!” the voices yelled. “Be grateful! You’re too pretty to be walking alone. You don't like being complimented?!”

The sounds were part of an art installation, the work of Sacramento native Terra Lopez. Called "This Is What It Feels Like," everyone from delegates to activists to even Lt. Gov. Gavin Newsom walked through the exhibit. After exiting, they wrote comments and feedback on the install. 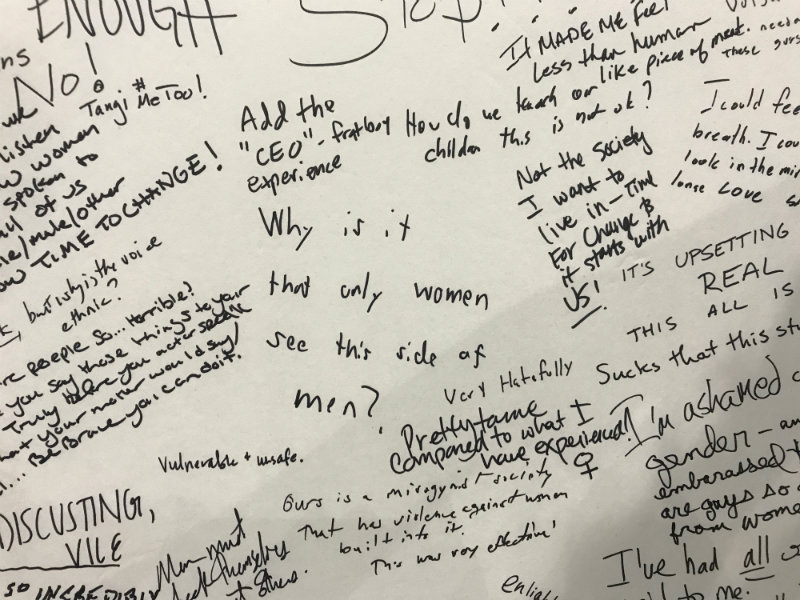 After going through the exhibit, people were invited to write their feelings on a wall. Sally Schilling / Capital Public Radio

The words people heard inside were culled from real life, Lopez explained. “We interviewed 100 women from the Sacramento area, and we have their cat calls verbatim,” she said. “Then, we went into the studio and had men — no actors — record these cat calls.”

The exhibit is intended for everyone, she says, but especially men. She says she was inspired by witnessing her own mother repeatedly experience gender violence: beatings, broken limbs and even being shot.

“My goal is to educate as many men as possible, create compassion so that hopefully our culture shifts and we just treat women better,” Lopez said.

The artist was one of two California women this past weekend at the convention to invite attendees to understand street harassment and gender discrimination firsthand through exhibits.

Next to Lopez's installation stood what looked like a bright convenience store. Or, as artist Dorian Lynde called it, an “inconvenience store.” Inside were various household items, most of them offering a satirical take on how major advertising campaigns target women.

Products included the Gleam Glass Ceiling cleaner and the Back Off Harassment repellent.

The exhibits, sponsored by Planned Parenthood, spoke to the influence of the Me Too movement at the Democratic Party's annual gathering. Women's issues were highlighted throughout the convention. During the opening remarks, delegates were even informed of a sexual harassment hotline that would be available the entire weekend.

As Lynde conceived her installation, called "Buying Power," she heard the news about the We Said Enough letter, which was signed by more than 100 women working in and around the Capitol and called for an end to sexual misconduct and harassment.

“What’s terrible is that it’s not just a situation that people in legislation face, everybody faces it,” she said.

Sometimes you just want a repellent to deter cat-callers and other harassers. Is that so much to ask? ¯\_(ツ)_/¯ Find this and other products at our Buying Power pop-up shop this weekend! #CADEM2018 #PPHearsYou pic.twitter.com/aBboD6GYck

Newsom and Attorney General Xavier Becerra, who is up for re-election, were among the politicians who visited her store.

“It’s really important to have it be at this convention in front of all of these policymakers,” she said.

This was the debut of Lynde's “inconvenience” exhibit. Lopez debuted her audio installation previously in Sacramento. Both works will be at a Planned Parenthood event at the Capitol on May 14.

Stopped by the @PPActionCA exhibit called Buying Power. If you check it out, don't miss the glass ceiling! #CADem2018 pic.twitter.com/4PzUiEHbyL