‘Adapt To Whatever Mother Nature Gives Us:’ Tahoe’s Tourism Economy In A Changing Climate 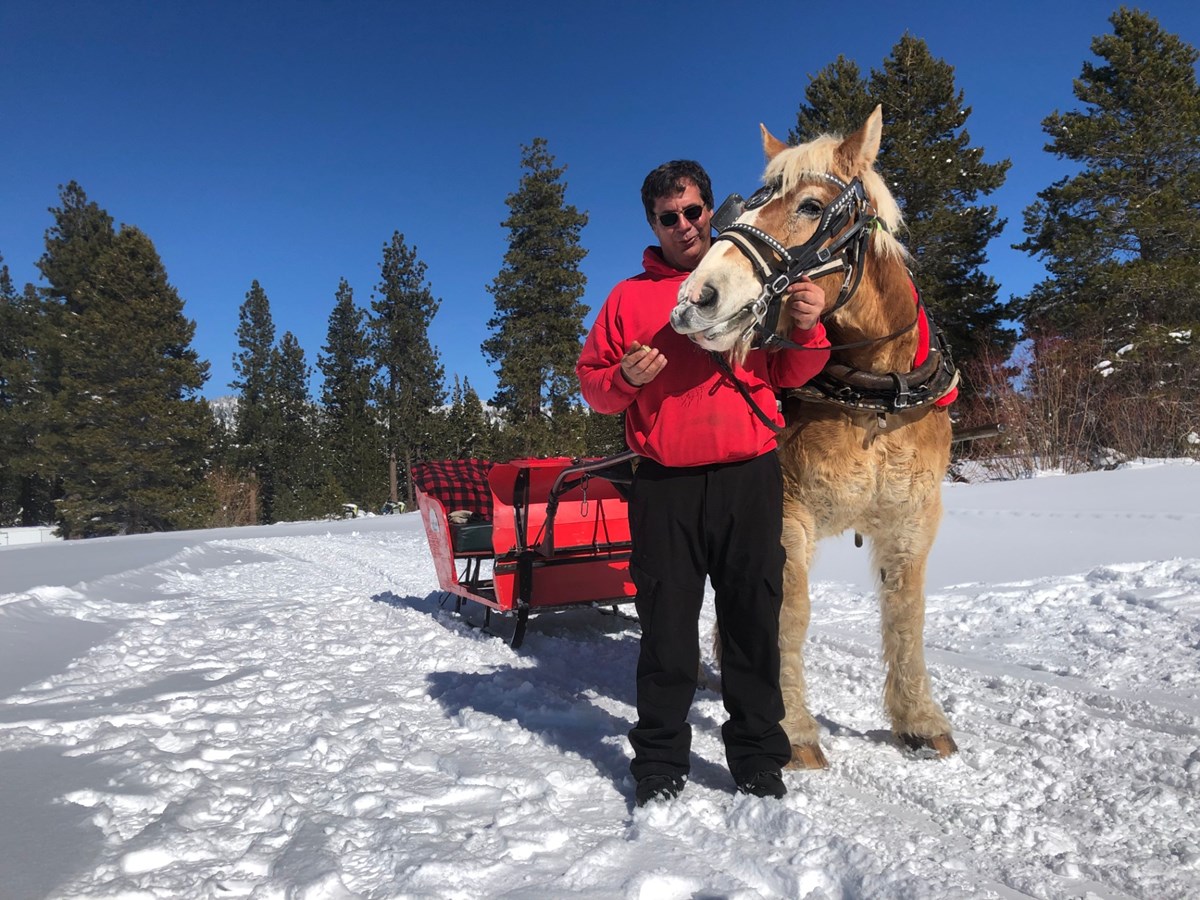 Dwight Borges’ family has been giving sleigh rides in South Lake Tahoe since 1967. But in 2018, he wasn’t able to give a single one because temperatures were too warm for sleigh-worthy snow.

“There has to be a minimum amount of snow for us to operate,” Borges said. “And it has to be frozen. So we were not able to operate because of the warm temperatures.”

Borges’ family started Borges Sleigh and Carriage Rides after his family won a pony named little Joe in a car dealership raffle. He said that the business has always been at the mercy of the weather, but that things are getting more and more difficult as Tahoe’s climate becomes more variable.

As of 2015, more than 10,000 jobs relied on Tahoe’s tourism economy, which lives and dies by the snow. That means climate change will create even more uncertainty for business owners like Borges and for the seasonal workers who are already among the region’s most vulnerable residents.

Climate change will mean big changes for the Tahoe region, with shorter winters, less snow, more intense droughts and warmer temperatures, according to a draft climate vulnerability assessment of the Lake Tahoe Basin. That means people who depend on Tahoe’s snow for their income will be losing work as the climate shifts.

This change was evident during the drought that lasted for much of the past decade. Between 2013 and 2015, almost 2,500 jobs disappeared in Tahoe’s visitor-serving industries, according to the Tahoe Prosperity Center’s Measuring for Prosperity report.

“Our ski resorts closed early,” Tahoe Prosperity Center CEO Heidi Hill Drum said. “There was inconsistent staffing at our ski resorts. There just weren’t enough visitors. And so folks’ hours were getting cut, and they weren’t getting the same level of consistent work that they used to.”

Many people in Tahoe rely on the winter snowstorms to make a living — and have for generations. The potential for less snow and more extreme droughts would make it harder for them to make ends meet as the climate changes.

The uncertainty of winter seasonal employment in Tahoe is also making it harder for local businesses and resorts to find and keep workers, Hill Drum said. The idea of working long hours to make enough money to survive in the offseason and not knowing when or if a job will be there next year is getting less appealing for people.

These challenges facing Tahoe’s tourism economy have far-reaching impacts, too, since tourism makes up a majority of the region’s economic output, according to the Measuring for Prosperity report.

But it’s not just the hours that drive workers away. It’s also the high cost of housing in Tahoe that leads some people not to come back for another season of work.

“We’re already seeing challenges with our local businesses in finding the workers that they need due to the high cost of housing in the region,” she said. “I think that will just be exacerbated if we don’t thoughtfully plan and think about our regional economy in terms of sustainability and long-term thinking.”

Making It Work In A Tourism Hub

Living in Tahoe is simply not affordable for many of the people who power the region’s tourism industry, according to the center's report. The median price for a home in the Tahoe Basin in 2015 was $490,500, out of the range of affordability for people making hourly wages in the hospitality and tourism industry.

But it’s not just workers in the tourism industry that can’t afford housing in Tahoe. In a balanced housing economy, half of residents can afford to buy a median-priced home, the center’s report said. The numbers are far below that in the Lake Tahoe region, with only 21 percent of people in the Basin able to afford a median-priced home in 2015.

The unaffordability of housing makes the vulnerability that workers feel as climate change impacts their job prospects even more nerve-wracking.

And the problem isn’t getting better. Little if any of the new housing coming on the Tahoe market is priced for the local workforce.

Of the new jobs projected to open up in the Tahoe region between 2010 and 2021, the center’s report estimates that only 12.5 percent would pay $30 an hour or more — the minimum income needed to purchase a single family home in many parts of the region.

But while many of the people who live and work in Tahoe can’t afford to buy homes there, some parts of Tahoe are actually a bargain for one group: vacation home owners.

Compared to other winter vacation destinations such as Aspen, Colorado, and Park City, Utah, a place like South Lake Tahoe is actually a bargain for people looking for a second home, according to Zillow Director of Economic Research Skylar Olsen.

“Those homes could be very affordable to other people in the country,” Olsen said. “They’re buying their secondary property from somewhere else. They’re bringing to bear incomes from L.A., incomes from San Francisco, incomes from Boston, incomes from other places. And so those there [living full-time in Tahoe] can’t always afford those properties.”

As year-round residents struggle to afford homes, Tahoe’s second homeowner population is growing. In some parts of the Basin, the majority of homes are owned by non-residents, according to data from the Placer, Douglas, Washoe and El Dorado County Assessor’s Offices and the Tahoe Prosperity Center.

In the part of the Tahoe Basin that sits in Placer County, 93 percent of the housing stock is taken up in the vacation market. In the part in El Dorado County, where South Lake Tahoe is located, its 78 percent.

Having this high of a share of non-resident home owners is tough on a community, Hill Drum said. Second home owners don’t spend as much money at local businesses as full-time residents do, and they don’t pay as many sales taxes throughout the year. But they’re also less likely to be engaged in their neighborhood and interested in projects to better it, which is a challenge for communities, she said.

So what can people in Tahoe do to stabilize their community and make it easier for workers to stay in Tahoe? Find a way to spread the economy out over the whole year, Hill Drum said. She wants to see Tahoe become a more stable place for ordinary people to live — not just a tourist destination.

So how can this be made reality? Tahoe needs to adapt, Hill Drum said.

When Dwight Borges was faced with not being able to give any sleigh rides in 2018, Borges hooked his horses up to carriages and left the sleighs behind so that his business could still operate.

“We had to put wheels on the sleighs so we could keep on operating,” Borges said. “Or we would be doing our carriage rides, where we go down the street. We have to adapt to whatever Mother Nature gives us.”

Some ski resorts have also found ways to keep business going through the summers, like Heavenly, which opens up a zip line in the summer for visitors. This is promising for Hill Drum, and she’d like to see even more of this kind of innovation.

But in those short, dry or rainy winters, some businessesare able to turn to making their own snow in order to stay open a little bit longer. But for smaller businesses like Borges’, that’s not always possible — and that makes the future even more uncertain.

“It’s going to make it difficult for people who operate businesses here in Tahoe without snow making equipment,” he said. “So if you have snowmaking equipment you’re good… even with that, it has to be cold temperatures. You just never really know when that’s going to happen.”