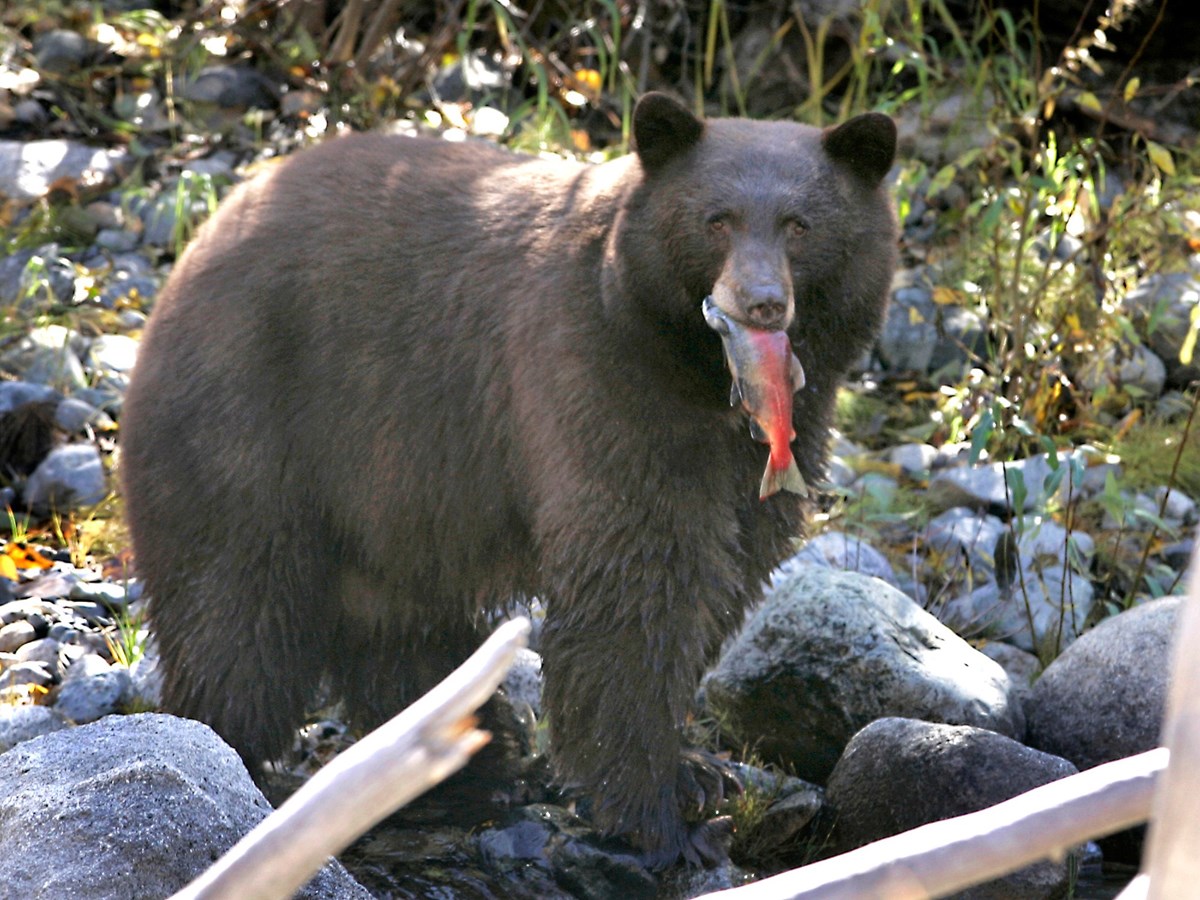 Climate change will transform the way humans experience Tahoe. But for bears, it could mean that they’re eating more garbage, getting into more conflicts with humans and even dying sooner as they grapple with shorter hibernations.

“We’re really just learning about this because it was never an issue before,” large carnivore biologist Rae Wynn-Grant said. “It was never a question of whether a bear would hibernate or not.”

For every 1 degree Celsius increase in average daily winter minimum temperatures, bears hibernate around six days less, according to a study by Colorado Parks and Wildlife and the USDA. If those findings hold true for Tahoe in the next 80 years, bears in the Lake Tahoe Basin could lose around 10 to 30 hibernation days by 2099 based on climate change projections.

There’s a degree of uncertainty to these numbers. No one can say exactly what Tahoe or the climate will look like in 2099, and things could change between then and now. It’s possible that the relationship between temperature and hibernation could change in the next 80 years. But these projections give us an approximate picture of what bear hibernation in Tahoe could look like in the future.

Wynn-Grant has seen this transformation with her own eyes. In a New York Times article from May 2018, she described trying to monitor hibernating bears in Tahoe only to find them awake instead.

“Everything really gets screwed up,” she said. “From a purely ecological standpoint, it’s an interesting process to watch… But when we’re in the line of observation of wildlife and making sure that we have a healthy and balanced ecosystem, it’s quite alarming.”

What's a bear to do?

Bears in places like Tahoe have evolved to hibernate for a good part of the year. It’s a survival mechanism to make it through the months when there’s less food.

Bears don’t only stop eating when they hibernate. They actually stop many other normal bodily functions too. They mostly stop defecating, their body temperature drops and their heart and breathing rates slow down.

Hibernation even affects them on a cellular level. When bears hibernate less, their cells age faster, according to a study done by the Colorado Department of Parks and Wildlife and the University of Wisconsin-Madison.

So these shifting hibernation patterns will mean a big difference in bears’ lives and biology. But from a bear’s perspective, less hibernation wouldn’t be the end of the world, according to USGS biologist Heather Johnson. Bears could adapt to deal with this change, but where things get sticky is when humans come into play.

“As human development expands, and bears and people are interacting more… it’s their interactions with people that really put them at risk for higher rates of mortality,” Johnson said.

Bears face two choices when they don’t hibernate like they’re supposed to: Starve, or seek out other sources of food — even in your backyard or trash can. That’s because Tahoe’s ecosystem does not produce enough fruits, nuts or any other type of natural bear food during the winter, even when it’s warm enough to shorten hibernation, according to Wynn-Grant.

“When the climate changes, we’re seeing bears getting a little bit more confused about hibernating,” Wynn-Grant said. “Instead of starving to death, we’re finding that they might be able to find human resources.”

To survive, bears will put themselves at risk of running into humans even more than they do now to find food in urban environments. And experts say that that can lead to increasing human-bear incidents.

There are around 20 bears that live within the city limits of South Lake Tahoe. Toogee Sielsch, with the Sierra Wildlife Coalition, helps to safely remove them.

As it is, people have reported more than 4,000 run-ins with bears to the California Department of Fish and Wildlife since 2009. That number includes reports of sightings, home or vehicle break-ins, bears getting into trash cans and much more.

And in Nevada, the state wildlife department has had to handle more than 1,500 bears since 1997 (Nevada has a much smaller bear population than California).

The fear is that as the number of human-bear interactions increase, so does the potential for conflict

"The worst consequence of all"

Drastic changes, like the temperature increase expected over the next century, can be hard on bears when they’ve evolved to survive one way, according to Wynn-Grant.

While it might seem like a good thing if bears in Tahoe are able to survive a winter without hibernating, it might mean that bears have become dependent on human food.

She said that this reliance on human foods to survive a year with less hibernation could be a “death sentence” for bears as they spend more of the year interacting with humans.

Once a bear has come to rely on human food, it’s very hard to retrain them, said Stephanie Coppeto, a biologist for the U.S. Forest Service in the Lake Tahoe Basin. In this case, she says that humans are part of the solution — and part of the problem.

“If a bear begins to damage property or makes contact with a human, that bear can be euthanized and taken out of the population,” she said. “That’s the worst consequence of all our potentially bad behaviors in storing food and disposing of trash.”

For the Nevada Department of Wildlife, the main focus on bear behavior and hibernation in Tahoe is on the availability of human food and trash, according to spokesperson Ashley Sanchez.

“It is about educating the community on how to live responsibly in bear country,” she said. “The main thing we try to do is get out there and educate people on how to secure their attractants.”

She said that the department sees that as the main concern with bears in Tahoe rather than temperature, and that they are working to help residents prevent bears from becoming reliant on human food.

But for Coppeto and Wynn-Grant, the two factors are intertwined. Coppeto said that as the world gets warmer, it’s even more important for people in Tahoe to be careful to keep bears away from unnatural food sources.

Wynn-Grant worries about a different challenge that could face bears as they hibernate less: Human frustration.

For bears and humans to coexist in places like Tahoe, it’s important for humans to feel comfortable living alongside bears. To humans, Tahoe is an area that combines the urban and the wild, with areas segmented out into residential areas and wild forested areas. But for bears, it’s all just land.

Hibernation has helped balance out the struggle of managing bears in Tahoe’s urban areas for about five months out of the year. People could feel safe during the wintertime, even if they see a lot of human-bear conflict the rest of the year.

“If bears aren’t hibernating because of the changing climate and ecosystems or because of human intervention, that means that we’re going to have yearlong human-bear [conflict],” Wynn-Grant said. “That’s difficult for people. People can have property damage from human conflict. They can be in danger. It can lessen their tolerance for conservation.”

That possibility is worrying for Wynn-Grant. Black bears are not an endangered species in the United States right now. But that’s because of a lot of work over decades and decades to bring them back from the brink of extinction more than a century ago.

“For something like human-bear conflict in the winters to rise up again because of climate change might mean that all of these conservation efforts are for naught,” she said. “We might be seeing more bear deaths because of conflict or because of starvation with lack of resources in a warm winter.”

Wynn-Grant worries that these shifts could land black bears “right back to where we started.”

“If bear conflicts increase, there’s no way that people will continue to feel comfortable with the conservation efforts of these species,” she said.

And we’re only starting to understand the implications of this change, according to Wynn-Grant. But there are steps us humans can take to help protect Tahoe’s bears.

“We need to be vigilant throughout the year not only to lock up our food and store our trash properly, but to make sure we lock our vehicles,” Coppeto said. “We close our doors and lock our doors…

How we calculated bear hibernation projections

Our projections about bear hibernation in the Lake Tahoe Basin are based off a 2017 study done by Colorado Parks and Wildlife and the USDA. That study, which was done in Southwest Colorado, found that for every 1 degree Celsius that average daily winter minimum temperatures rise (from Nov. 15 to April 1), bears will hibernate for six days less.

We compared this finding with average daily winter minimum temperature measurements for the Lake Tahoe Basin through 2099, provided by Desert Research Institute researcher Ben Hatchett. By 2099, temperatures in the basin are expected to rise by 1.9 degrees Celsius in a low estimate, and by 5.8 degrees Celsius in a high estimate. These low and high ends are based on future emissions scenarios, which are used to model potential climate futures. The median change would be 4.05 degrees Celsius. Multiply it by those six days, and that lands us at more than three weeks of lost hibernation time by 2099.

The Colorado study only used their findings to project out to 2050, while we applied them through 2099. A lot could change between 2050 and 2099 — with bears and with the climate — so our findings are assuming that the relationship observed between temperature and hibernation in Colorado holds true in Tahoe, and that that relationship stays the same through 2099. We ran this methodology by Heather Johnson, one of the researchers involved in the Colorado Parks and Wildlife and USDA study. She provided us with the above caveats on our calculations, and said that they did not run their calculations out to 2099 because of the number of variables that could change over that amount of time. We attempted to convey that uncertainty in the body of our story as well.