The opening strains are quiet, heavy; soaked in fuzz and shadow. As Jolie Holland’s voice cuts through like a clarion call you get the first taste of this record’s nuance. 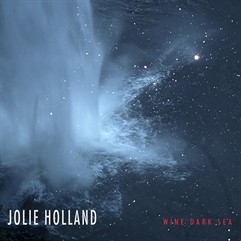 Wine Dark Sea is Jolie Holland’s sixth release on Anti- records and over its eleven tracks she infuses innovation into the well-trod traditions of blues, country and rock. With cuts like “Dark Days” Holland bends and twists the typical verse-chorus-verse structure into a heavy experiment in hand claps and feedback. It’s one of the darker songs on the record with the pained refrain “and when every little thing reminds me of him, I want to smash it all up and never start again.” "I Thought It Was The Moon" is another track that leans minimal and experimental; more poetry set to music than a typical song.

Holland never lingers longer than need be on any style. Shifts in tone come about every four-minutes as with the fourth track "Route 30." It's an extra twangy (pronounced “twuh-ANG-ee”) call back to the classic country of Hank Williams, Roger Miller and Tammy Wynette. Texas blues comes into the picture on the back-to-back tracks "The Love You Save" and "All The Love" (noticing a theme?).

The first is a swingy Joe Tex cover and features vocalist Chanticleer Tru. It’s the only duet on the record and any itch that Albert Collins or Van Morrison fans may have will be happily scratched by this track.

The second channels the spirits of Joni Mitchell and Bonnie Raitt in its easy cadence. There’s a sad buoyancy about “All The Love.” On one hand the lyrics tell of someone’s determination to keep a romance going no matter how long it takes, on the other, the instrumentation is somber (a peppy somber, but somber nonetheless).

Another style change comes with “Palm Wine Drunkard” and its barroom piano cabaret. Tom Waits famously nominated Holland for the Shortlist prize a decade ago; this track with its raucous doom makes it easy to hear why she caught his ear in 2003. For all the immanent gloom on Wine Dark Sea the closer “Waiting For The Sun” is a real feel good moment. While the upbeat horn section (punctuated by baritone sax and steady groove bass) yields images of 80s era/we’re-trying-way-too-hard R&B, it’s hopeful without coming across as sappy.

The album insert is crafted as wryly as each song on the record. Rather than simply listing each contributor and what they play, Holland describes the sounds each musician makes per song. For instance on “Dark Days” bassist Geoffrey Muller is credited with “weeping psychotic breakdown noises.”

On "I Thought It Was The Moon” he’s listed as providing "space cows coming home to roost."

"[B]ass clarinet and the more rhythmy, shimmery guitar” during “First Sign of Spring” is credited to Doug Wieselman. Holland’s descriptions continue throughout and  they add a level of depth and intent I find rewarding and refreshing.

It takes a few listens but I realize just about every song is written around the topic of love, that hoary old go-to. Holland so expertly writes her songs so that prominent themes like heartbreak, lost love and associated frustration don’t hit you over the head. They’re presented in clever ways that run from despair to cabaret (sometimes all within the same song). Wine Dark Sea is an expertly paced, diverse album. The tracks are composed of the same deep blue tones without ever sounding “samey” making every listen a fresh experience.