Recollections From The Kingdom Of Swing

BG was a man of a very few words; he was loquacious, articulate, through his clarinet, but generally disinterested in talking. One of his better friends was Old Man Deforest, a woodworker and taciturn Yankee at least twenty years his senior, who lived across the road from us in Stamford, CT, and had who constructed three of the five fireplaces in our 200-hundred-year old house. He and BG took frequent fishing trips, and I can easily picture them saying nothing for days – my father’s idea of a really good time.

He withstood interviews, seeing them only as a necessary evil within the status of celebrityhood. He could stomach the usual range of questions about his childhood, his career, even answer for the thousandth time how it happened that, among his brothers, he got the clarinet: when their father brought them to Hull House for free musical instruments, as the shortest, he naturally was given the shortest instrument. However, he did not take kindly to generalities like, “Benny, where do you think music is heading today?” To this question, he would answer, grimacing slightly, “I have no idea”; even, when exasperated, ”How should I know?”

Nor was he fond of examining alternatives other than the practical (such as whether to have a corned beef or pastrami sandwich). I always remember him finishing the phrase “on the other hand,” said by him or someone else, with “he had warts.” 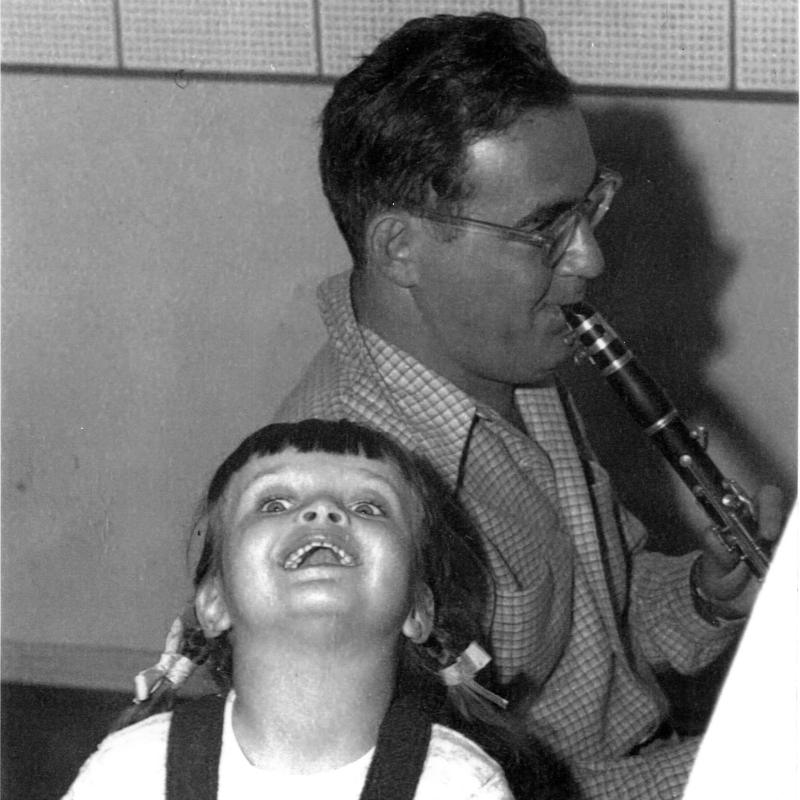 Genius takes many forms; some gifted people can describe clearly what their art form is and how they enact it; others can’t. I’ve learned that there are three kinds of movie directors: A) those who let their actors run with their own performances; B) those who show the actors what they need to do and how to do it; and C) those who will recognize what they want only when they see it, and are clueless in telling their actors how to get there, asking them to do take after take “till they get it right.”

BG’s form of musical tutelage went with Plan C – something I saw in the many times I played classical piano with him or for him in the room we called the studio. It often involved looking faintly pained at the way I was playing something. At least, not looking pleased.  I’d ask of a certain phrase or passage that I just played, “How’s this?” He’d answer, equivocally, ”Pretty good,” which meant, “Nope.” What I learned over the years, was that it was useless to ask him for any kind of advice as to phrasing – to help me play a melody of Beethoven or Brahms or whatever classical composer I was working on – so that it would sound as sweet, as moving, as inevitable as the way BG played “Sweet Georgia Brown,” or “Body and Soul.” This form of “teaching” drove me crazy. Sometimes, sitting at my right on the piano bench, he’d attempt to whistle the melody as he wanted to hear it, but only an expert whistler can do justice to a complex classical melody, and BG was an expert clarinetist. Sometimes he’d try playing the melody on the piano, but he didn’t know the keyboard, so he’d wind up crossing one finger over the other in a bizarre way, making the melody even less recognizable than his whistling did. But I’d keep trying, one version and then another, till his face lit up and he’d announce, “Now you’ve got it.” And I’d be happy. Just as I’m sure that the “boys in the band,” as he called them, would be happy, when they finally achieved the correct lilt and tempo in ‘One O’Clock Jump.”

The studio where BG and I practiced, and where he sometimes recorded or gigged with musician buddies at the small parties my parents threw around every two years, was designed by my mother Alice. She was a woman gifted with an expert spatial and architectural sense, who took pride in being able to draw a floor plan of any building she’d set foot in – unlike my father, who she claimed, even after staying in a hotel for a week, would consistently turn the wrong way when exiting the elevator. This music studio, a detached part of our house, maybe 700 square feet, had been the garage. My mother had it converted into a large, high-ceilinged space, where my father could go to be alone, to practice. This wood-paneled room, a Moroccan many-colored glass lamp hanging from its vaulted ceiling, housed our baby grand piano, a long curved sofa, an American antique music stand and high backed chair where BG practiced, the floor around it always strewn with his reeds - in or removed from their periwinkle blue French boxes. In front of the many-paned window overlooking the swimming pool and garden, was a large antique wooden chest housing an LP turn table, receiver, and a motley assortment of jazz and classical 33 records, including BG’s small collection of Verdi operas, whose drama he relished. Opera was relegated to the studio because my mother loathed it, part of her cultured New York background having meant weekly trips to the opera; she asserted that a worst week of her childhood was the one when she had to go twice to Stauss’ Der Rosenkavalier. In the “opposites attract” department, she was pretty disinterested in all music, including Jazz.  She would, however, go to a lot of my father’s gigs, where she’d sit and do her knitting. And it was not music that she listened to on her transistor radio (the long defunct version of the iPod), as she happily weeded and planted her gorgeous English garden, but baseball – a passion she developed via BG.

Swing is mysterious. In 1974, I was sitting in, at a rehearsal of BG and his band. When they had finished playing, I walked over to look at their scores of Roll’Em, having never actually seen any of the Fletcher Henderson scores he used. But to my disbelief, I couldn’t find on the score the notes I’d just heard. I felt bamboozled. My solid knowledge of musical notation told me that the page would be a blur of horizontal flags created by the sea of 32nd and 64th notes, the tiny slices of rhythm that topple the music off the beat, hurling it within the Kingdom of Swing. But the tiny rhythmic bits weren’t there: only quarter notes, lolling, bored, on the page. Impossible!  I keep peering, expecting my bouncy vision to materialize.

BG was off in the corner, seated on the high stool where his painful back often forced him.

“I don’t get it,” I complained. “How come the notes look like this? This isn’t what you play.”

He was incredulous. “Of course it isn’t. You didn’t know that? Swing can’t be written, you gotta play it. You gotta make it happen.”

That day, it became clear: “I Got Ryhthm,” played as Gershwin notated it on the page, would plod along like “Mary had a little lamb.” Swing is mysterious.