Slideshow above best when viewed in full-screen mode

SUNDAY The region's homegrown music festival TBD Fest wrapped up three days of music and arts with a blowout set by pop-funk act, Chromeo. That's no exaggeration. The lights literally went out during Chromeo's set, and the crowd used cell phones to illuminate the scene as the last song was played.

Chromeo blew out the lights at #TBDfest and we crowd sourced it with cell phone lights. #wearetbd

Event organizers estimate some 32,000 people attended the festival over its Friday through Sunday run.

"It's home base for all the creatives this weekend," says Delgado.

The Capital Dance Project also utilized the pyramid space to perform dances choreographed to a piece by DJ Shaun Slaughter.

Ballet dancer Stephan Calka performed with Capital Dance Project over the weekend. He says the collaborations are important for the community and their creative process.

"Artistically it helps us broaden our horizon. It helps you think in a different way and come at your art form from a different angle," says Calka.

Another video of the @capitaldanceproject dancing to one of the songs I curated specially for @tbd_fest Super proud of everyone involved.

In a combination of technology and art, Sacramento-based tech-team Rocket Department brought four eight-foot tall obelisks with spinning cubes and LED lights. Festival goers posed for pictures among the lights and played with the spinning cubes.

Overall, the second edition of TBD Fest was well received by attendees. Despite the heat, long lines for water, and moderate amounts of dust, people left the festival grounds in high spirits and excited for next year.

View from the top of the Ferris wheel at #tbdfest2015 - so many people! #wearetbd

SATURDAY Temperatures were high and the dust thick, but that didn't take away from the great music being made in West Sacramento on day two of TBD Fest. During the height of the day's heat fans came out to see performances by hometown favorites Two Sheds, Jonah Matranga and Dusty Brown.

Brown is an electronic musician/producer. He says TBD Fest organizers treat the local acts just like the bigger names.

"I feel at home here," says Brown. "I feel extra blessed this year. They put my on the big stage. That helps me in the long-run outside of Sacramento."

Brown says TBD's relastionship with local musicians differs from most other music festivals he's played around the country.

"TBD fest definitely supports the locals and they don't just put 'em on a little local stage. They put them right out in front." 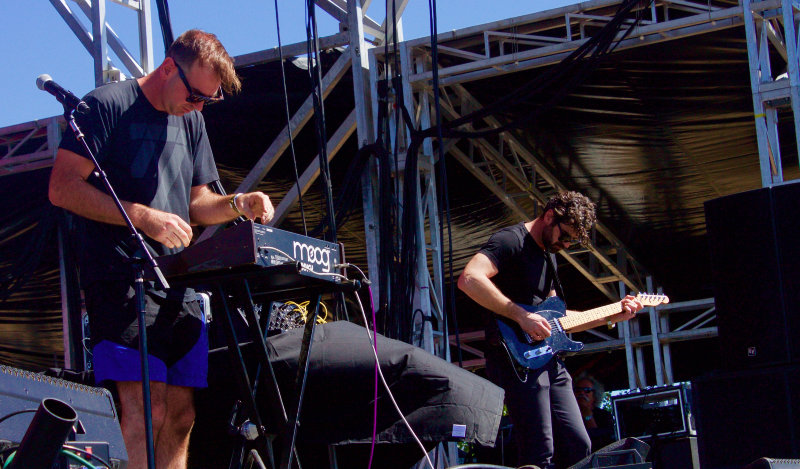 The CapRadio Music team spent most of Friday working on a special project (related to the festival), but we managed to make it back to the festival venue in time to capture these moments.