The Dreaded Diamond Writes And Records Sophomore Album In A Month 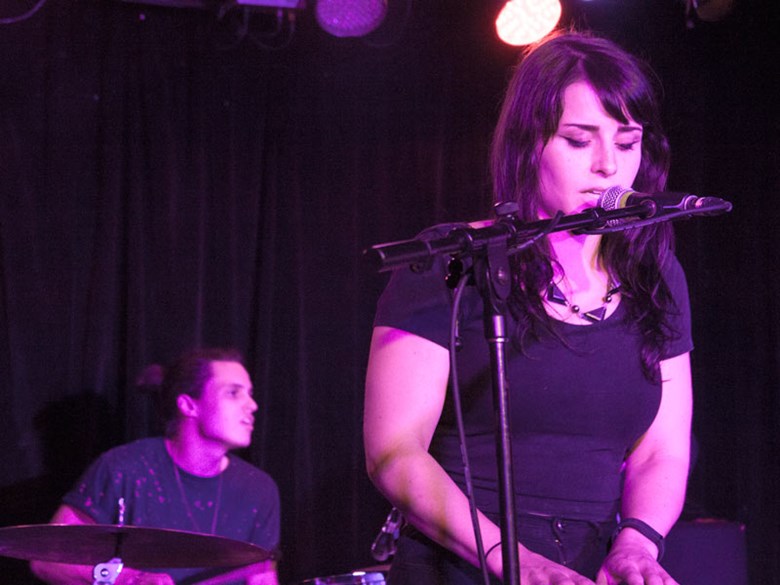 Tyler and Juliana Lydell performing at Harlow's on Friday evening.

Brother-sister duo Tyler and Juliana Lydell started making music under the name The Dreaded Diamond when they were teenagers.

“It was adorable, just very cute,” says Juliana about their early work. “But we didn’t want it to be cute.”

They released Healthy Fears in 2011 shortly before the siblings parted ways, Juliana headed to Austin, Texas and Tyler moved up to Redding, California. They both moved back to their home town of Sacramento last year.

They classify their sound as "math pop," referring to a style of music popularized by bands like Tera Melos and Maps and Atlases known as "math rock."

“[Math rock is] basically rock music that has some jazz influence, as far as playing with music theory,” says Juliana.

“All of the rhythms sync up following the melody. It has a sort of jolting feeling to it – and it kind of catches you off guard, but everything is kind of synced together,” explains Tyler.

Four years since their first album they've written and produced a less "adorable" album, called Youngling, in the span of one month.

“We literally sat down a little over a month ago and we had nothing,” says Tyler, who plays drums and sings. “It was a conscious effort to make a memory together and not get caught up in the perfectionism. There’s always so many things you want to change, Michelangelo says ‘a work of art is never completed only abandoned’.”

“So we’re just trying to abandon it, just as quickly as possible,” jokes Juliana, who plays piano and sings.

This methodology means a rawer more organic sound. They both say there’s a unique beauty in the imperfections.

“We kept saying this is a snapshot, to blunt that impulse to want to hold on to something and polish the details of it. We knew going into it would be extremely crunched,” says Juliana. “Most of the things we did in one take. This is what we wrote and this is what it is.”

Another big difference between the two albums is Youngling features a full band.

“It has a healthy energy to it, it doesn’t feel sterile,” says Tyler.

The siblings have grown a lot in the past four years and the new work reflects that growth.

“When I was younger I was just very upset.” Juliana goes on to say she felt the only way to make really good art was to abuse herself. “There’s an element of self destruction you think you have to go through. Eventually I figured out that that wasn’t true … I’m super stoked most of the time and I don’t feel bad about it. I think it makes my art better.”

The siblings are planning to part ways again in the fall. Juliana is going to school in San Diego and Tyler’s music career is pulling him to Nashville. However, before they close the book on this chapter in Sacramento the pair wanted to make a memory together.

“When you start creating something you send out a vibe and hope other people catch it and can feed off it and run with it,” says Tyler.

People picked up on that vibe and joined in to help make the album: Norman Williams on bass, Ryan Tillema on guitar, Demetri Wells on keyboards and percussion, Daniel Schafer on trumpet and Emiko Bankson on violin.