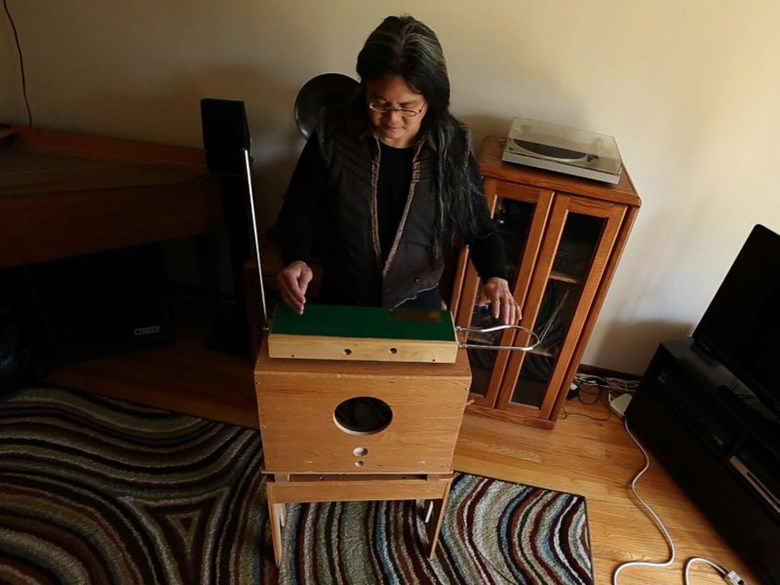 Mark Chang’s long black and silver hair falls around his shoulders in a loose half-ponytail. As he adjusts his portable Theremin in his Davis living room, he is surrounded by old phonographs, a piano and a harpsichord.

It takes less than a minute to set up the instrument. Chang hovers his hands between the antennas, shivering them ever so slightly to produce different tones and notes. As he moves his hands a familiar tune forms in the air; familiar with a unique electronic quality, like a singing robot.

“You literally have to hold your breath to play it,” explained Chang. “Even just the movement of your chest going in and out will cause it to go out of tune.”

It takes him a few times to get the right notes, but the song in undeniably the theme to NPR’s ‘All Things Considered.’ “There’s some intense concentration going on,” said Chang. “It does require very precise control of your movement.”

The Theremin is one of the earliest electronic instruments, developed in 1920 by Russian inventor Léon Theremin. Chang picked up his first Theremin in the ‘90s.

“I used to collect vintage electronics. I’ve always been into electronics,” Chang said. “I’d take things apart and figure out how they worked and I’d always be intrigued when things worked a little differently than they were supposed to.”

His first Theremin was a kit produced by Robert Moog, of the Moog synthesizer. He liked it alright, but found it cumbersome to transport. “So I built a new kind of Theremin, that’s battery powered. It had a built-in amplifier and speakers – all in one. You just walk into a place with a box and unfold and start playing,” Chang said.

He said he just built it for himself and never really thought about bringing his invention to market. “I have a whole filing cabinet of inventions I’ve never done anything with,” said Chang. “I’ve been so sidetracked with helping other people do their things.”

Chang collects vintage radio parts and then sets up pirate radio stations so he can listen to old music through the radios he builds. “It’s like time travel,” he said. “I’ve always liked time travel.”

His love for time travel is made evident by the 1980’s time-travel themed pinball machines he restores. He has two beautiful specimens in his garage, right next to a car driven by playing the piano and an electric unicorn scooter.

“When I got it it was a complete basket case,” Chang said about a twinkling shiny pinball machine, “Nothing worked. The circuit boards were completely corroded by battery acid. I had to resolder all the tracers and replace a whole bunch of parts. This play field was completely coated with dirt and old wax, that all had to be cleaned.”

Hearing this specific machine transports you in time from the 1980s, and the music changes as you move through the decades. “As you get to the 1950s it turns into a retro game, it starts making all those clattering sounds that an old pinball machine would make,” said Chang as he played through a couple levels, expertly taping the paddles to move the tiny silver sphere around the board.

His collection of more than 50,000 vintage electronic parts fills up the better part of seven storage units. He is known around Davis as the man behind the pirate radio station, Davis Live Radio, broadcasting sporadically between 1993 and 1999. When the campus radio station, KDVS went down unexpectedly in early 1997 Chang took over the signal for two weeks.

When Chang’s artist friend, Anna Davidson, asked if he could use a plant to conduct electricity to play music, Chang designed a tiny plant Theremin. He played Yankee-Doodle-Dandy as an example. He said plants are filled with waters so they are great at conducting electricity. He’s currently using a little bamboo plant, he tried a different plant but it was too dry.

His piano car was a passion project after losing his house and job; he said it was something to keep his mind off things. The electric unicorn came about when he was asked to participate in a Unicorn Stampede Parade at the Burning Man Festival. He altered an electric mobility scooter, giving it more torque and power. He lined it with sparkly pink tulle and topped it with a giant stuffed unicorn toy – but if anyone asks it runs on unicorn magic.

If you ever seen a grown man, probably barefoot, with flowing hair popping wheelies on a giant pink unicorn in Davis, that’s Mark Chang; inventor, tinkerer and Thereminist.