A person may wonder how the music of Beethoven or Chopin might have changed if someone from the future had brought them modern ideas such as jazz rhythms and instrumentation. That’s basically what happened to traditional Japanese Taiko drumming in the post-war era.

With complex and syncopated rhythms, for centuries taiko drumming was played on a single drum in Shinto and Buddhist ceremonies.

“He's fond of saying spirit is the most important aspect of what taiko is about. Discipline of mind, body and spirit and working together in harmony,” she says. “Bringing all these aspects of yourself together so you can interact with the drum and the audience in a powerful way.”

Sacramento audiences will have an opportunity to see Sensei Seiichi Tanaka perform with Sacramento Taiko Dan at their 25th Anniversary Concert at the Crest Theatre on Saturday September 20.

“It’s awesome to watch him perform,” notesTamaribuchi, now a taiko Sensei, or teacher and Artistic Director of Sacramento Taiko Dan.

She says she really wanted to bring Tanaka to Sacramento because it was his teachings in technique and spirit that she brought to Sacramento. Including him in the Anniversary concert will “reflect on where we've been and where we're going.”

Where they’re going is expansion of their activities over the past 25 years. Besides a performing ensemble, Sacramento Taiko Dan offers classes, brings performances to schools and is the official umbrella organization of an international women’s taiko group, Jodaiko, which preceded Sacramento Taiko Dan by a year. They made their debut in 1988 at the CSUS Women’s History Month Celebration. Today, Jodaiko continues to express the passion and strength of women through the art of taiko. 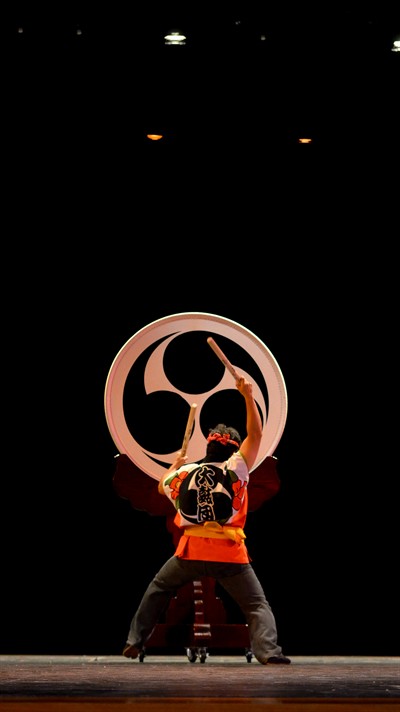 As a student of Sensei Tanaka in San Francisco in the late 1980s, Tamaribuchi remembers that taiko was a more masculine-oriented art form with few opportunities for women to perform the more powerful pieces, both in North America and in Japan.

“That’s changed over time,” says Tamaribuchi. A change aided by the organization of Tamaribuchi’s international group of her fellow female students and teachers.

“The goal was initially not only to have women play these more physical styles but also to advocate that we could do it, both here and in Japan.”

Now with members from across Canada and the United States, including Vancouver, Winnipeg, Toronto, Minneapolis and Tucson, Jodaiko performs internationally, including at women’s-oriented events, music festivals and for women’s advocacy organizations and celebrated their 25th anniversary last year with a performance at the Vancouver East Cultural Centre. The group is scheduled to perform next year at the Powell Street Festival in Vancouver, the largest Japanese-Canadian cultural festival.

“There are people researching it right now why it's predominantly women who participate at this point,” says Tamaribuchi. “In North America, with few exceptions, the people who tend to make time for this and really pursue it are women” adding that women find it empowering and that internationally, more women now participate in taiko than men.

“Of course there are still some very strong groups that are predominantly men especially the more traditional groups in Japan.”

Sacramento Taiko Dan also attracts racial and age diversity. The adult performing ensemble has 23 members and the youth group has about 20. Both will perform at the anniversary concert. Their classes are for anyone seven years or older and a pre-kindergarten program is in the works. Tamaribuchi says the classes have about one-third Asian students, mainly of Japanese descent. There are also Filipinas, African-Americans and Caucasians.

“Classes are for anyone in the community who wants to learn, who has an interest. We usually run three sessions per year. We have a one-day workshop that leads into an eight-week class if you want to continue. But folks who just want to come down and do it for a day are welcome.”

Performing ensemble members are recruited from the classes.

Sensei Tamaribuchi stressed the benefits of studying taiko. “It's a good physical activity for people who want to…get back in shape. A lot of people feel a connection to traditional Japanese cultural arts but also just getting involved in arts at all," she explains.

“Taiko is cool in that it's a multi-disciplinary art form, so not only are you learning a musical instrument…and musical notation and so forth, but it's a physical activity, it's a team sport. It's very similar to martial arts in a certain way without being oppositional; you're not fighting anybody. The movements are very much the same and the training is very much the same. So you get the whole discipline thing.”

A performance isn’t only drumming. Tamaribuchi explains that the incorporation of movement in taiko also makes it a visual art form.

“When we take it to a professional theater it’s considered dance more than just drumming.”

“Fully at least a third of what we're doing onstage is movement oriented…the expressiveness of the form is supposed to add to the rhythms that you're hearing,” she says.

To add a balance of traditional dance to all the percussion, joining Sacramento Taiko Dan at their Saturday performance will be Toshiye Kawamura and the Sacramento Japanese folk music and dance society Sakura Minyo Doo Koo Kai, with whom Tamaribuchi first performed at age 16.

With their appearance and the performance of Sensei Seiichi Tanaka, the upcoming 25th Anniversary concert at the Crest Theatre brings Sacramento Taiko Dan full circle with a return to their roots and an exhibition of all the enrichment they’ve brought to Sacramento over the years.

Advance tickets available at Osaka-Ya at 2215 10th St. and Oto’s Marketplace at 4990 Freeport Blvd. in Sacramento.