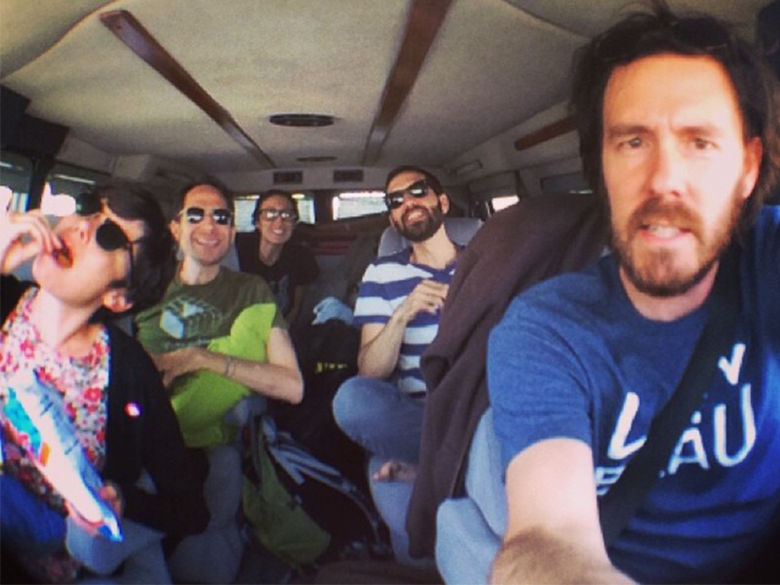 Johnny Gutenberger plays with his phone all through the session. He taps his screen now and again, panning from band mate to band mate.

The group he started with Caitlin Gutenberger had an eventful few months prior to our June in-studio sessoin. They just completed their latest record Assembling; Johnny’s solo album Whatever Forever dropped in late February and they added three members.

At the time of this recording, backing vocalist/percussionist Tess Shapiro was in her first month. Keyboardist/guitarist Philip Krohnengold had only been with the group a week. If they were stressed out by the last few weeks, it didn't show.

Caitlin sums up their year:
“[We’ve] just been writing a ton of music and we've been recording and Johnny’s been blowing up on Vine so we’ve been managing his blooming celebrity in the social media world.”

The Two Sheds sound is a lot like a light-hearted, bionic Mazzy Star: Smokey vocals and subtle, folk-tinged electronic textures ride over rock beats and keys. The couple has worked to prefect that sound for more than a decade. Over the years Caitlin and Johnny learned how to keep from editing themselves to death.

"I think it’s like when you’re a kid, and you want to draw a picture of Superman, and you have this picture in your head and it’s beautiful and his muscles are perfect. Then you try and draw it and it looks like this sad little deflated balloon with a little limp looking cape thing coming out. Whatever you have pictured in your mind, it’s going to come out differently through your filter and I used to have a really hard time with the fact that I couldn’t have these perfect little superman songs." – Caitlin Gutenberger

“There’s really no point in laboring over it.” says Johnny. “Really, every second you’re not creating you’re losing time. The best feeling about making, creating, something is when it’s done and you’re like, ‘Oh my god, it’s so great!’ then you just need to take that energy and keep putting it into something creative.”