Skills To Pay The Bills: Sacramento Musicians And Their Day Jobs 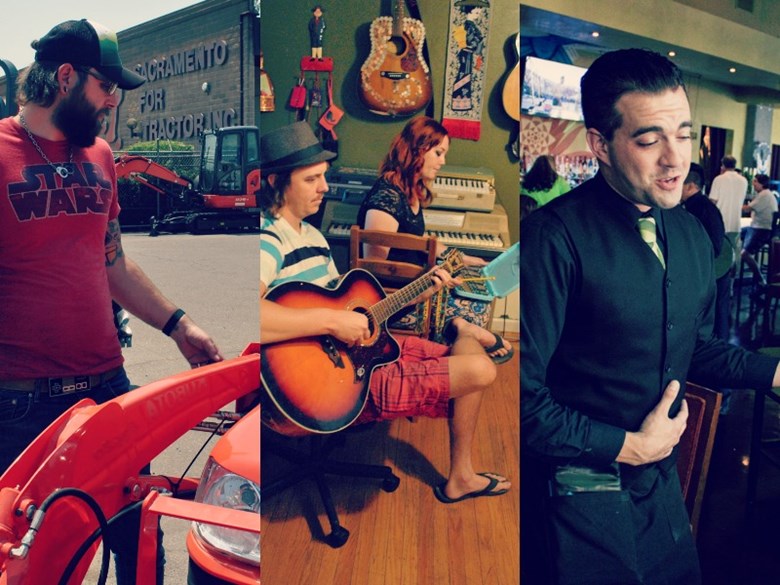 Day jobs, most musicians need one, or two, or three to pay the cost of recording, gear, touring and living. Sacramento artists are finding different ways to entertain their muse and develop useful skills along the way.

Jessie Brune and Blake Abbey call it the “hustle;” that is the practice of pursuing numerous money-making endeavors while they move their band forward.

Brune and Abbey play in Musical Charis, but they also wait tables, teach music, and write scores and jingles for commercial clients.

For other artists it’s less of a hustle and more about finding a career they like that allows enough freedom and flexibility to make music and tour. That’s why Life In 24 Frames guitarist Kris Adams works as general manager of his family’s tractor dealership.

Some day jobs are closer to the goal of doing music full-time than others. Vince Vicari took a job as a waiter at Mayahuel in downtown Sacramento and when his boss found out he could sing traditional Mexican ballads Vicari found himself the resident singing waiter.

Each day job not only helps pay the bills but also provides the artist skills applicable to their work as musicians. 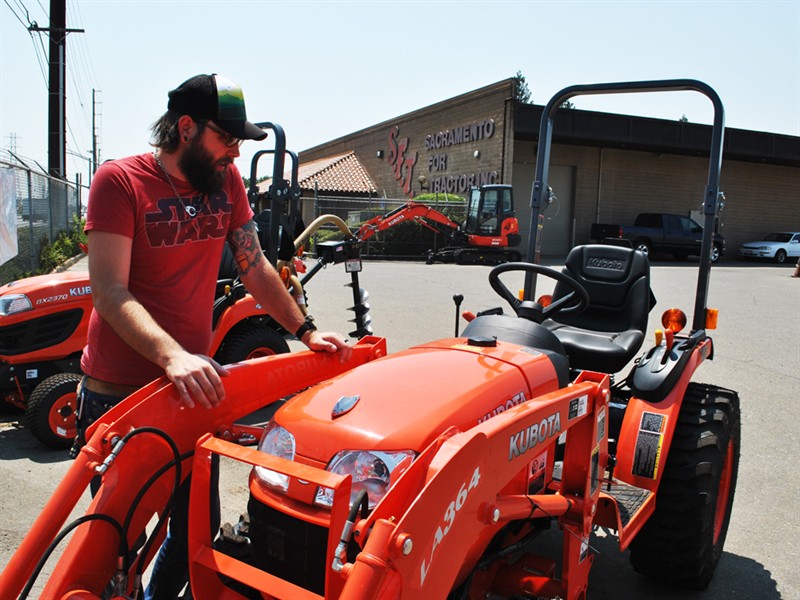 Adams explains why a Kubota BX2370 would be a good option for a smaller plot of land: it’s compact with all the horse power of the LA364. When the dealership began in the '70s, it was called Sacramento Ford Tractor Inc. When it stopped selling Fords Adam’s father suggested knocking the ‘d’ off the sign and changing the company name to Sacramento For Tractor Inc. You can still see the faint outline of the ‘d’ on the front of the building. Melody Stone / Capital Public Radio

With gauged earlobes, a healthy beard, an arm full of geeky tattoos, and Star Wars sneakers, Adams might not look like the man who could help you pick your next tractor.

“I don’t look like I would run a tractor dealership,” Adams admits. When new people come in he says they give him a look and he has to relieve their distrust by throwing out some mad tractor knowledge.

“I started working here when I was about 23, and now I’m in charge of the whole place. Egh, it’s a career I guess.”

Life In 24 Frames, practices in a studio above the shop.

“There are plenty of times when I am in my office and I have a spark of genius so I just run upstairs and record it,” says Adams. 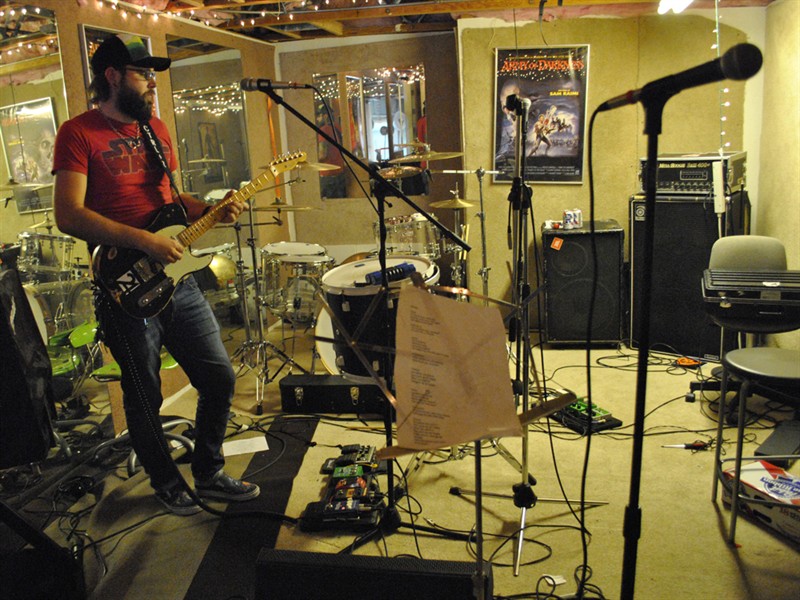 When Adams gets a bolt of inspiration he can run up to the studio above the shop and work it out before the idea fades. Melody Stone / Capital Public Radio

He said even though there’s very little overlap in his tractor dealership life and his music life, he’s learned from running a business that helps him run his band.

“It’s taught me a lot about business which, for the last five years, I’ve applied to this band,” Adams explains. “If it weren’t for the hard lessons I’ve learned [at the dealership] I don’t think we’d have the opportunities we’ve gotten.” 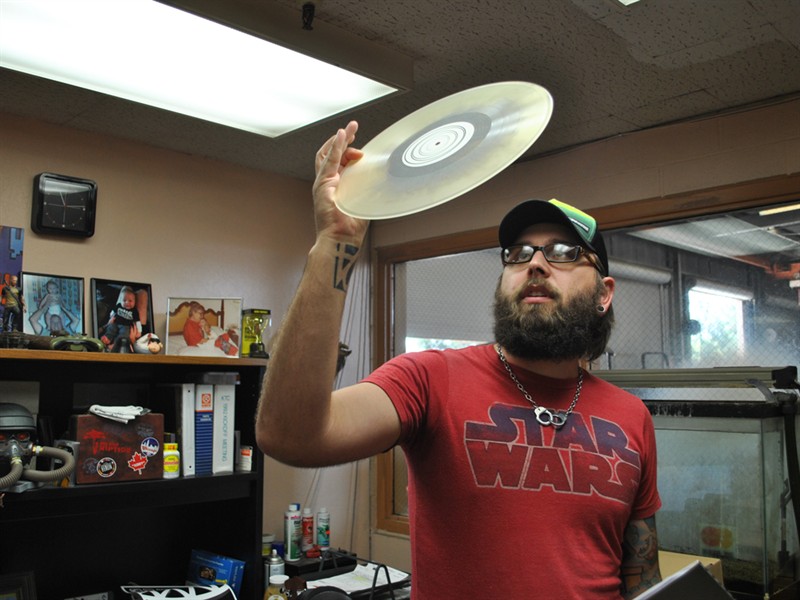 Adams inspects a record that had just arrived for the vinyl release show that night. Adams has band related material shipped to the office. Melody Stone / Capital Public Radio

The dealership first started selling Kubotas in the ’70s. At the time no one had heard of the Japanese tractor manufacturer and Adams’ grandfather had to convince customers to give Kobota a chance. What Grandpa did for the brand is something Kris is trying to do for his band.

“[Life In 24 Frames has] a modest following and I’m very happy with our accomplishments – we have a great product we just need people to listen to us,” says Adams. “I just keep trucking along with both of them.”

If his music career took off Adams wouldn’t fight it, but he has a one-year-old son and there’s something to be said for stability.

“If I were doing music for a living I would be happy,” Adams said, but he’s not rushing to get out of the tractor business. “I mean, I like it. It’s in my blood I guess.” 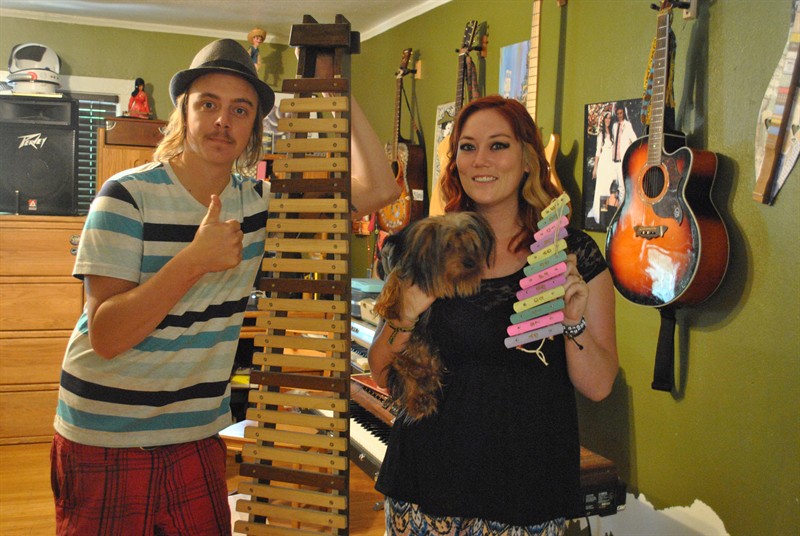 Brune and Abbey keep up “the hustle.” They say they never want to stop. The bigger the band gets the more clients they sign for jingles and video scores. The more scores they write the more residual income comes in and it all keeps them a float in their second-floor flat with their rabbit named Bunny and their dog named Banjo.

Back in 2010 Brune and Abbey drove a halfway across the country to spend a season writing music in an old lighthouse in the middle of Texas, outside the tiny town of Beeville. Abbey’s brother bought the four-acre property from a cowboy named Rosebud. It was cheap. There they wrote a song titled “Calling Out” which was featured in a video for the Sacramento Convention and Visitor Bureau. The video was posted on the Movoto.com blog and got more than 33,000 views.

Abbey and Brune get most of their jingle and score requests through Kinetic Illusions, a video production company. They produced a version of the Miami Dolphin’s fight song for when there’s a third-and-goal.

“We like doing the jingle thing because it’s easy for us and it’s fun,” says Abbey.

He says jingles, weddings, wineries, and the kind of venues other bands might not think to book, generate good money and through these lucrative avenues they can afford to take off for 60 days at a time to tour the country.

“We want to be jacks of all trades in the industry,” says Brune. “I think it’s always going to be a hustle. It’s always the next job.”

Brune and Abbey founded a music school for kids in Oak Park. They had to close down that location because as Abbey said strippers hung out in the front of the school. Brune quickly adds, “they were prostitutes.”

Now they teach music lessons in their apartment.

Abbey points out that even incredibly successful people hustle.

“Mozart died broke because he spent all the money he made on his symphonies writing the next one,” Abbey says. “I think Mozart’s a good role-model.”

They say they aren’t look to sign with a major label. Abbey says the industry is changing so quickly no one really knows what works and what doesn’t. He wonders why follow someone who doesn’t know what’s going on, when you can figure it out for yourself. 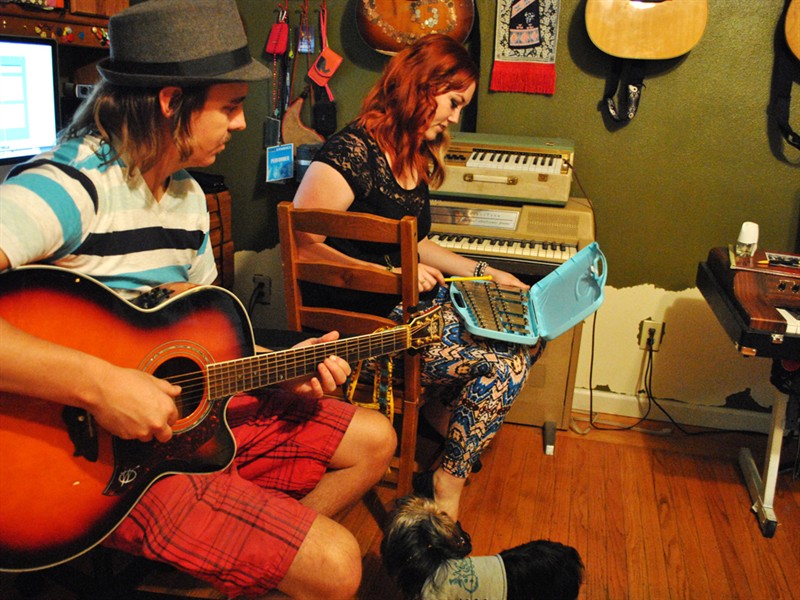 Banjo the dog looks on as Blake Abbey and Jessie Brune work out a tune for a client. Melody Stone / Capital Public Radio

“Paving your own path - it feels better,” says Abbey. “When you look back and you say ‘wow, we bought a bus and drove it around the country’.”

Musical Charis plays The Cat and the Fiddle Festival on Saturday at Fairytale Town at 1:30 p.m. on the Mother Goose Stage. 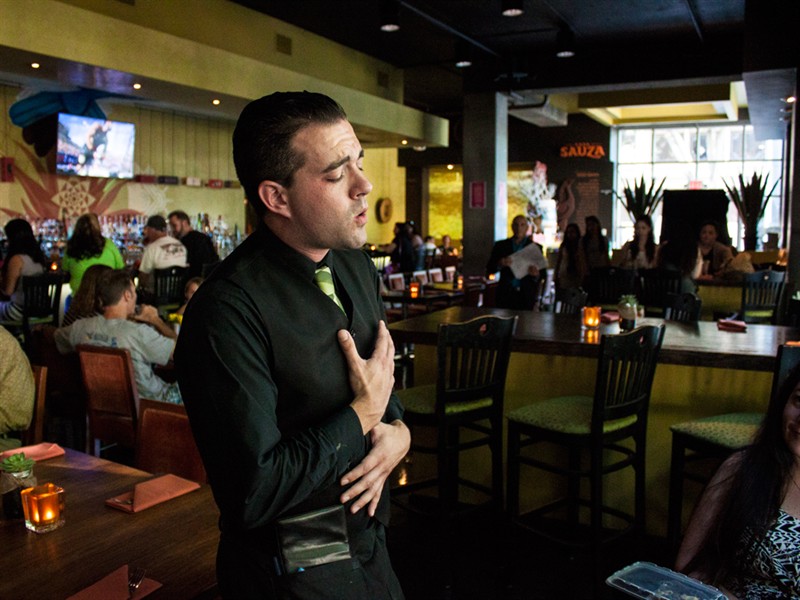 Vicari considers his gig as a singing waiter a stepping stone on his way to stardom. When he’s not waiting tables he’s playing shows and weddings and working at the Environmental Protection Agency. Singing at Mayahuel helps Vicari sharpen his ability to command a room and keep his pipes warm.

“I’m a waiter, but I also serenade people,” says Vicari. He has a repertoire of Spanish ballads ready to go when he thinks a table might like a song.

Vicari says the concept behind Mayahuel is a museum of Mexican culture, with food, tequila and music as exhibits. Vicari is one of the exhibits. How did a Sicilian guy from Sacramento come to sing Spanish ballads? Vicari speaks, reads and writes fluently in Spanish. He hung out with a lot of Mexican students in High School and dated a girl who only spoke Spanish – then he minored in Spanish in college.

In the late ‘90s and early 2000s there was a lot of Latin cross-over into American pop music, and vice versa. Vicari said he’s always loved pop music and just fell in love with the Latin sounds. He learned to sing phonetically before he could speak the language.

“I just loved the highs and the lows and the long notes of the song,” Vicari explains about learning to sing in Spanish.

Part of Vicari’s job is figuring out if a table might like a song. Since Mayahuel is located near the Capitol and the Convention Center, sometimes people are just there for business and aren’t interested a serenade. So Vicari looks for couples on dates, parties of older people looking for a fun time, and of course large groups of ladies.

Here Vicari describes a time when he first started singing and he impressed a large table of Avon ladies.

“There is a difference between serving tables and singing tables,” explains Vicari. “If they’re bantering with me then I know these people will probably appreciate a song.”

He always asks if a table would like a song before he starts singing.

Vicari is happy he has a job where he can perform and pay the bills but he has his eyes on the prize of someday having his music pay all the bills. Until then you can catch him most week nights at Mayahuel.