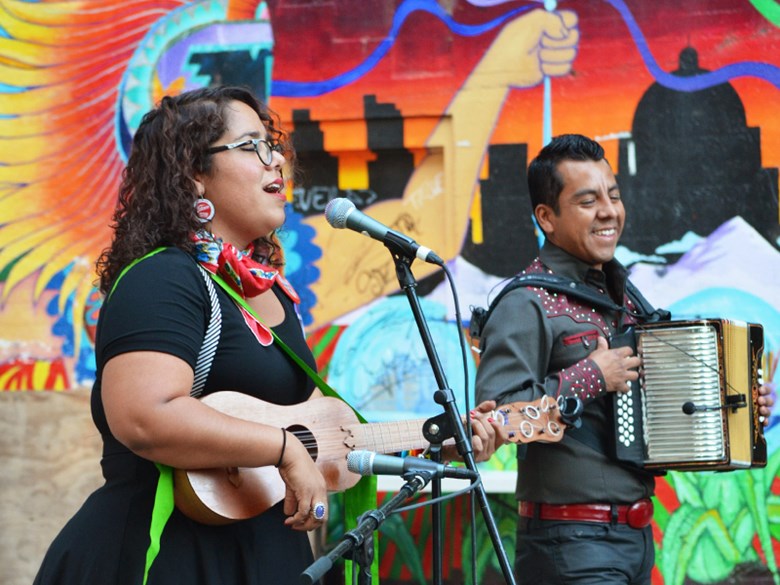 Singer Marisol Hernández was born in Los Angeles and first sang professionally on historic Olivera Street. Other band members were born in LA, Venezuela and Mexico, but all grew up in the multicultural Los Angeles area listening to a broad range of music including rock, punk rock, reggae and various styles of Latin music all of which now inform La Santa Cecilia's own sound.

Musical multiculturalism is only one of La Santa Cecilia's influences; social multiculturalism also defines their personal histories, and part of this has led the band to become something of a voice for immigration reform. In addition to having been raised within two cultures, band members include children of undocumented immigrants or are themselves undocumented as is accordion and requinto player José "Pepe" Carlos.

Brought to America at six-years-old with his undocumented parents, Carlos is now a DREAM Act beneficiary and continues to work with attorneys to further his case and only recently was granted permission to travel with the band to perform in Mexico, his first time back in 26 years. With personal ties to the immigration issue, the band wrote the song "ICE - El Hielo," with ICE referring to Immigration and Customs Enforcement. The lyrics (in Spanish) illustrate the daily lives of undocumented immigrants who hope to study, whose birth-country qualifications don't matter to Uncle Sam, and who live in fear of being caught in an ICE roundup when they go to work and, when they are, how families live separated afterward ("Uno se queda aquí, otro se queda allá" - one stays here, another remains distant). The accompanying video features a cast of undocumented immigrants and activists including band member Carlos:

At the May 31 concert, La Santa Cecilia showcased their diverse influences with songs that included "Ice - El Hielo," a funky cover of "Tainted Love" and a Spanish version of "Strawberry Fields Forever" ("Campos de Fresa por Siempre"); inspired, and given new meaning, after seeing migrant workers in fields of strawberries.

The experiences of La Santa Cecilia illustrate one band’s experiences that shape their music; look for the upcoming Fiesta en la Calle concerts similarly to reflect the diverse styles of today's Latin music:

Fusion of Latin and Reggae; dance oriented with Caribbean and World flavors.