Violinist Chase Spruill On Experiencing Classical As A Black Musician 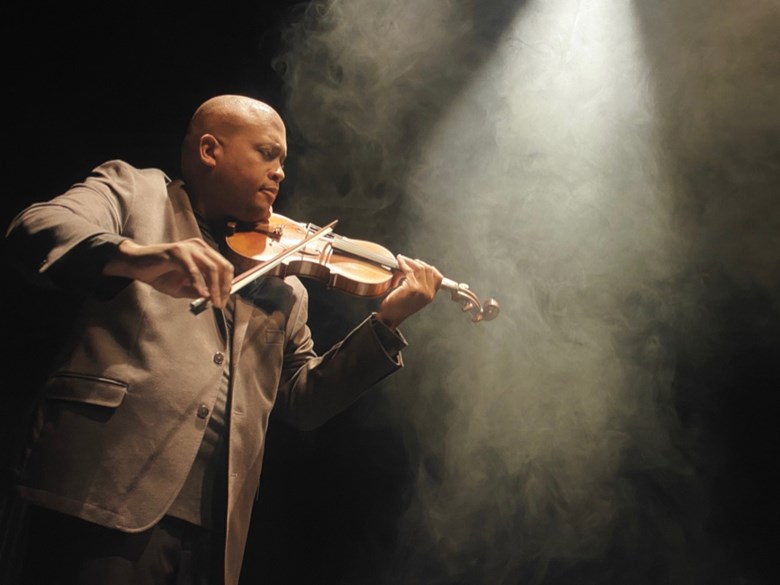 We are in a singular time. In the midst of a global pandemic, many are also experiencing, witnessing, and participating in the largest civil rights demonstrations in decades. Important questions and issues are being raised.

As a professional musician, my attention of course turns to my own world. Many friends and colleagues in my field are professional classical musicians and people of color. As intensive discussions unfold around the country about these changing times, I wanted to hear from and listen to voices differing from my own experiences.

My first thought was to reach out to my dear friend, violinist Chase Spruill. Chase and I have known each other since we were kids, and we’ve been playing music together for years. For the past seven years, Chase has worked with American composer Philip Glass and his team from the East Coast.

Chase first discovered the music of Philip Glass at the age of 8 when he encountered the '90s horror film "Candyman," a story with biting social commentary on how the historical wounds of slavery manifest violence into our culture today. Chase would later go on to record a version of the "Candyman" theme on the composer’s own record label.

Now, Glass has resurrected a relatively obscure short work from his score for the 1997 film “Bent,” presenting it in a new context as an Epilogue for solo violin, as a musical response to these times. Chase was chosen to record it.

I spoke with him recently about this and his feelings during this moment.

On how he was approached to the play the piece

From the 1997 film score “Bent,” there was originally a full orchestral score and in the movie they also had these separate sections for a string quartet. At the very end of that score, there is a really solitary violin solo. And the piece wasn't widely known, the score wasn't widely known.

So Richard Guerin, who works fairly closely with Philip and runs the label and he's a close friend of mine, he came to me with the idea of releasing the last movement … in the midst of these very troubling times. And I think not directly as a statement of anything. But he and I talk a lot anyway — about Philip's music, about movies, music that we're hearing, things that are going on in the world — and this was something that stood out to him, I think, as being musically appropriate. So they sent me the score with just some minor revisions, and it felt really appropriate for the moment. I'm really, really happy that we're able to bring some life to it.

On where he went inside himself while playing this piece

I think I didn't have to go far.

You know, particularly in the past two weeks, from the beginning of June until now, you don't have to go much further than turning on your television set, listening to something on the radio. You'll have to go much farther than answering your phone when you have friends that are calling, or family that are calling. In one way or another I think we're all experiencing aspects of the same kind of solitude and pain and grief.

So when I'm looking at this music, when I'm trying to put it in my hands, literally, physically putting the violin in my hands — I'm trying to imagine I didn't have a voice, and I certainly don't have words all the time for how I feel. But in this particular moment, which seems unprecedented on many levels, what does that sound like? And I think Richard said it really well. Aching and longing that that's sobbing, that wailing. I think that's usually where I try to come from.

On his experience as a Black man in classical music

As a Black person, when you see what leads to the protests and you see the videos containing really jarring, shocking violence and you see the looks on people's faces and life is draining out of them, when the person who's causing it seems to not understand that life is draining out of the person and that they're causing it, or that they potentially don't care. You want to feel like, Oh, my God, how could this be happening? How can any of this be possible in our world?

Unfortunately, I had to say that a sad fact for me is that I'm joining a lot of other people that aren't shocked. I think culturally there's been so much of it. So many of these kinds of incidents that there's a factor where we're not shocked. We're angry when it comes down to it.

And I think that some of the discord happening for our various cultures in the United States is coming from the fact that another portion, another population of our country, is for the first time experiencing the kinds of trauma that other people can run from or can't look away from or can't not experience. So I think we have experienced some confusion where some people feel like, 'I'm just so sick about this and I can't believe what I'm seeing and how terrible and how can anybody do anything like this.' And they haven't even gotten to the rage part and the despair part and the hopeless part.

I think when these George Floyd protests started and the videos became public, many, many black people were already at the rage and despair and the fighting against feelings of hopelessness part. And we're waiting for some of our other brothers and sisters to join us there, you know, who are not of the Black, African-American experience. And I'm personally thankful that so many have joined in that larger movement and in that conversation, because what you see out on the streets on the news is phenomenal.

In terms of the franchise of people that you see out there, skin tones of people coming from very different cultural ethnic backgrounds: It's so hopeful and wonderful that you're not alone. People can say, oh, at least this moment we saw it very clearly and we have a feeling about it, and our feeling is that it is wrong and that we want something to change. We're going to stand with you until we get some kind of a change. And I think that was something that was quite new out of this movement. So that's how I feel as a Black person.

On perceptions in classical music

For me, something happened just in my hands. I'm pretty double-jointed. And I remember the first time somebody took a picture of me when I was on stage and like, my pinky sort of curves up a little bit. And I got a pretty long conversation with somebody about how the pinkie curves and it's not allowed to look like this. Go look at the pictures of these great violinists from the '20s, '30s, '40s, '50s, '60s.

And that was the point where I started really understanding that what we value, what we think of as valuable now out of violinists and musicians, is really set from a particular time, from a particular era, and it has a very particular look.

I don't know at what point the individual decides to ask questions about why do I have to do it that way? If I can't do it that way, does that mean that I will never be accepted? Will I never be able to work in a community of musicians because my hands are different?

That's just the hands. Then you eventually come around to, oh, I don't look like any of these people. My experiences are different from them educationally, geographically. Does that set me apart, does it make it less valuable for me to be involved in the classical music institution? It's a hard moment, I think, for a person to realize that they have to battle against other people's perception of what they find valuable.

On whether music can have a hand in moving things forward

I believe it can … It's going to require a lot of us to unscrew our brains and put it on in a different way and see how it can function.

I would challenge musicians everywhere who are really keen to get involved in the fight, the struggle, the movement: Challenge yourself to be okay with the discomfort. And find one actionable thing. Find one actionable thing that you want to go after, that you think is going to have an impact. Something that your community would actually benefit from.

If we could just resist the idea that we are here to get one big answer very quickly, you can receive the information that we're being given within ourselves, by our neighbors. Using the best tools we have around us to think critically about new information, I think that we stand a fantastic chance. Just allow yourself to be in school.