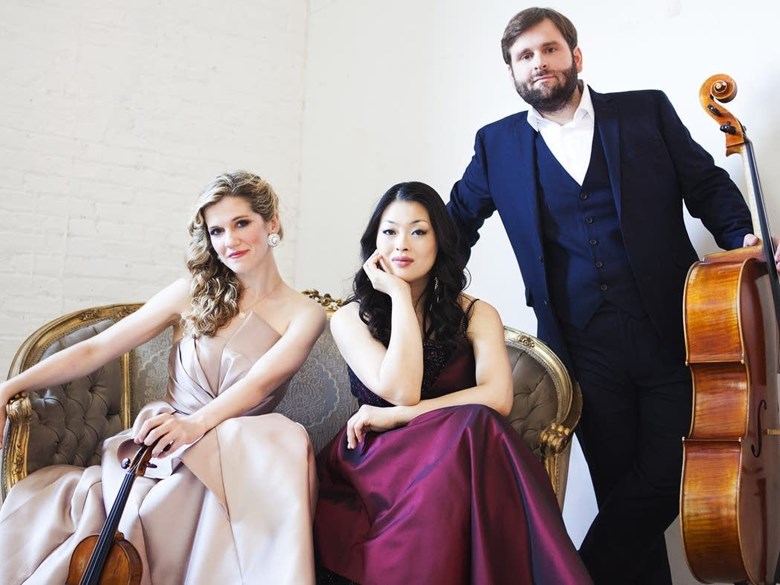 'Neave' is a Gaelic name, it means bright and radiant. Those are words that describe the music making of this trio. However, that's not how they got their name, as you'll find out.

Their newest recording is called Her Voice. It celebrates three trailblazing composers, who happen to be women.

Could you please explain the name of the trio? Where did the name 'Neave Trio' come from? I know it actually is connected to a late friend of yours named Bruce. He inspired you in many ways. Who would like to share that story?

Anna Williams: "We would play concerts in this particular community in New Jersey and got to know many members of the community, in particular this fellow named Bruce. Unfortunately, he suffered an accident and became paralyzed. We started going to him. Those times that we would go and play for him, I think meant more to us than they could have even meant to him, because we would play for him, and he, in turn, would share with us stories about his family and his life before the accident. And, most notably, he would talk to us about his daughter, whose name was Neave.

"So, we chose the name because it encapsulated that really profound experience of seeing and feeling firsthand how this music that we love has a really unique ability to connect us to one another on a pretty profound level."

Your third recording is called HER Voice, or is it Her VOICE?

Mikhail Veselov: "'Voice' I would say is the biggest point."

Anna Williams: "'Her' is also important."

Mikhail Veselov: "It is important."

Mikhail Veselov: "We did talk a lot about the idea of women composers and how we don't say that about men composers. You don't say, oh, 'male composer piece.' I think the idea is hopefully sooner than later we can get away from that and just call composers, composers. We don't have to specify the gender or race or anything else like that."

Louise Farrenc's Piano Trio Opus 33 opens this recording. She was a very intriguing pianist and composer. Beethoven was one of her influences. I'm curious, do we hear that in this trio? Where might it appear? Where could you draw our attention to hear a bit of Beethoven?

Mikhail Veselov: "Researching a little bit about the piece and also her, we talked in rehearsals about how there's a bit of Schumann here. And then we found out that Schumann was actually inspired by her music, not vice versa, which was very interesting to see because she was writing around the same time as Schumann. But she did write her trios before Schumann did his. So she was very well-regarded during her lifetime, which is which obviously great."

The Piano Trio Opus 50 by Amy Marcy Cheney Beach was written in 1921. It was her last major work. I wanted to ask you about the second movement, the Lento, because she took some of the same form as the Lento in her Gaelic Symphony for which she may be best known. Can you help us understand that a little bit better?

Mikhail Veselov: "She includes two movements in one. It's a 50-minute piece in its entirety, and the second movement has both the slow movement and the scherzo in the middle. The contrast it creates, and how it highlights both the A part, which is very lyrical, very songlike, and then the scherzo, the juxtaposition is very special. It's unlike any other piece I've heard from any other composer."