The sun sets behind a row of electric towers in Fresno County on Sept. 6, 2022.

As California rapidly boosts sales of electric cars and trucks over the next decade, the answer to a critical question remains uncertain: Will there be enough electricity to power them?

State officials claim that the 12.5 million electric vehicles expected on California’s roads in 2035 will not strain the grid. But their confidence that the state can avoid brownouts relies on a best-case — some say unrealistic — scenario: massive and rapid construction of offshore wind and solar farms, and drivers charging their cars in off-peak hours.

Under a groundbreaking new state regulation, 35% of new 2026 car models sold in California must be zero-emissions, ramping up to 100% in 2035. Powering the vehicles means the state must triple the amount of electricity produced and deploy new solar and wind energy at almost five times the pace of the past decade.

The Air Resources Board enacted the mandate last August — and just six days later, California’s power grid was so taxed by heat waves that an unprecedented, 10-day emergency alert warned residents to cut electricity use or face outages. The juxtaposition of the mandate and the grid crisis sparked widespread skepticism: How can the state require Californians to buy electric cars if the grid couldn’t even supply enough power to make it through the summer?

At the same time as electrifying cars and trucks, California must, under state law, shift all of its power to renewables by 2045. Adding even more pressure, the state’s last nuclear power plant, Diablo Canyon, is slated to shut down in 2030.

With 15 times more electric cars expected on California’s roads by 2035, the amount of power they consume will grow exponentially. But the California Energy Commission says it will remain a small fraction of all the power used during peak hours — jumping from 1% in 2022 to 5% in 2030 and 10% in 2035.

“We have confidence now” that electricity will meet future demand “and we’re able to plan for it,” said Quentin Gee, a California Energy Commission supervisor who forecasts transportation energy demand.

But in setting those projections, the state agencies responsible for providing electricity — the California Energy Commission, the California Independent System Operator and the California Public Utilities Commission — and utility companies are relying on multiple assumptions that are highly uncertain.

“We’re going to have to expand the grid at a radically much faster rate,” said David Victor, a professor and co-director of the Deep Decarbonization Initiative at UC San Diego. “This is plausible if the right policies are in place, but it’s not guaranteed. It’s best-case.”

Yet the Energy Commission has not yet developed such policies or plans, drawing intense criticism from energy experts and legislators. Failing to provide enough power quickly enough could jeopardize California’s clean-car mandate — thwarting its efforts to combat climate change and clean up its smoggy air.

“We are not yet on track. If we just take a laissez-faire approach with the market, then we will not get there,” said Sascha von Meier, a retired UC Berkeley electrical engineering professor who specializes in power grids. The state, she said, is moving too slowly to fix the obstacles in siting new clean energy plants and transmission lines. “Planning and permitting is very urgent,” she said.

The twin goals of ramping up zero-emission vehicle sales and achieving a carbon-free future can only be accomplished, Victor said, if several factors align: Drivers must avoid charging cars during evening hours when less solar energy is available. More than a million new charging stations must be operating. And offshore wind farms — non-existent in California today — must rapidly crank out a lot of energy.

To provide enough electricity, California must:

Providing electricity during those hot summer evenings — when people use the most — will be a challenge, said Gee of the California Energy Commission.

“That’s what we’re particularly concerned about,” he said. “We have enough electricity to support consumption the vast majority of the time. It’s when we have those peak hours during those tough months.”

The total electricity consumed by Californians is expected to surge by 96% between 2020 and 2045, while net demand during peak hours is projected to increase 60%, according to a study commissioned by San Diego Gas & Electric.

Southern California Edison worries that if drivers charge during late summer afternoons, electric vehicles could strain the grid, said Brian Stonerock, the utility’s director of business planning and technology. Edison’s service area includes the desert, where customers rely on air conditioning, and their peak use times are when solar power is less available as the sun goes down.

Concerns about the grid “are quite a big deal for us,” he said. “We don’t want people to be confused or lose confidence that the utility is going to be able to meet their needs.”

But for many drivers, charging during the day or late at night is not a problem: Most electric cars have chargers that can be automatically turned on after 9 p.m. But for some drivers, especially those who live in apartments or condominiums, charging during those hours may not be an option.

That’s because — unlike filling a gas tank — charging an electric car takes much longer. Drivers may not have a reliable place to park their cars for long periods of time during the day while they work or late at night when they’re home. To encourage daytime charging, Victor said the state must drastically boost the number of fast chargers and workplace stations.

Fast chargers — like the Tesla superchargers available at some public spots —  can juice up a battery to 80% within 20 minutes to an hour. But most chargers are a lot slower: A level one charger, often supplied by manufacturers, could take between 40 to 50 hours to fully charge an empty battery. An upgraded, level two charger can take four to ten hours, according to the U.S. Department of Transportation.

“A lot of the increase in demand is going to come from electrifying transportation and it’s really going to hinge on when people charge. That’s a behavioral and technological question that we really don’t know the answers to,” Victor said.

For instance, in the summer when energy is the most expensive, PG&E customers pay about 55 cents per kilowatt-hour during peak hours, more than double the 24 cents during off-peak times, according to PG&E spokesperson Paul Doherty.

These time-of-use rates have been a “highly successful” strategy, Doherty said. Most PG&E customers take advantage of the lower pricing: On average, between 60% to 70% of electric vehicles in PG&E’s service area are charged during non-peak hours.

But not all state leaders are convinced that discounts alone will convince electric car owners to lay off charging in evenings.

“Moving forward into the future, it seems to me that the strategy is putting more and more stress and responsibility on the customer,” Assemblymember Vince Fong, a Republican from Bakersfield, told state agencies at a joint legislative hearing in November. “You’ve got an electricity grid that is leaning on customers to do more, instead of, actually, as a state, generating the power we need to keep the lights on.”

For PG&E customers, charging an electric vehicle when rates are lowest — between midnight and 3 p.m. — is roughly equivalent to paying about $2 for a gallon of gas, Doherty said. But as rates keep rising, charging a car could cost more than filling a gas tank.

“The cost of electricity is trending so high that it represents a threat to California meeting its goals,” said Mark Toney, executive director of the advocacy group Utility Reform Network.

A rush to replace natural gas, nukes with solar, wind

To replace them, the state Public Utilities Commission has ordered utilities by 2026 to procure 11.5 gigawatts of new renewable energy resources, or enough to power 2.5 million homes.

A new state mandate requires 60% of California’s power supply to come from renewables by 2030 — nearly double the amount of 2022.

And by 2045, solar and wind combined must quadruple, according to the California Energy Commission. That’s about 69 gigawatts from large-scale solar farms, up from 12.5 gigawatts, plus triple the amount of rooftop solar and double the amount of onshore wind power.

California’s target to build at least 6 gigawatts of solar and wind energy and battery storage a year for the next 25 years is daunting, given that in the past decade, it’s built on average just 1 gigawatt of utility solar and 0.3 gigawatt of wind per year. In the past three years, the pace sped up, with more than 4 gigawatts added annually, state data shows.

There’s also some “not-in-my-backyard” pushback in the desert and other rural communities. San Bernardino County outlawed solar farms on more than a million acres, and two projects were rejected in Lake and Humboldt counties.

The state must ensure that the transition to clean electricity protects the environment, is affordable and equitable, and avoids delays and siting issues, Breckel said. That’s why Californianeeds a robust clean energy deployment plan and to assign a lead agency rather than relying on piecemeal strategies, he said.

“Is the state on track to achieve its clean energy goals? Right now, there’s no one who can give you a definitive answer. More transparency on a plan that goes from here to there every year where we can track progress will really help answer that question,” Breckel said.

Assemblymember Phil Ting, a Democrat from San Mateo County, lambasted state agencies at the November hearing, saying they have no clear way to speed up new clean energy projects.

“What you’re saying to me is ‘we’re working on it, and we have no idea when we will make the system better’ and there’s nothing that you’re telling me that we could do as a state to make improvements,” he said. “Your answer is absolutely not appropriate…It’s very concerning.”

Ting expressed frustration that state leaders were “going backwards” by extending the lifespan of Diablo Canyon to 2030 and some fossil fuel plants. Fearing emergency brownouts like those that hit the state in 2020, Newsom and the Legislature last summer allowed some natural gas plants that were supposed to go offline this year to keep operating past 2023, and perhaps much longer.

Assemblymember Luz Rivas, a Democrat from the San Fernando Valley, said low-income communities near the gas plants will continue to suffer the most if the state keeps extending their retirement dates.

“We can’t forget about the costs that low-income communities like mine will bear from this,” Rivas said. She said “many disadvantaged communities across the state bear the brunt of impacts” of pollution from fossil fuels and climate change’s extreme heat.

Siva Gunda, a member of the California Energy Commission, acknowledged that the state “needs to do better to make sure we are on course to retire the fossil-fuel generation and not burdening communities.”

Gunda said the commission will have a report for legislators later this year. “You’re absolutely right that we need a long-term strategy for making sure we can get through the peaks with clean resources,” he told legislators.

California is betting on giant wind farms in the ocean to strengthen the grid and meet its renewable energy goals. 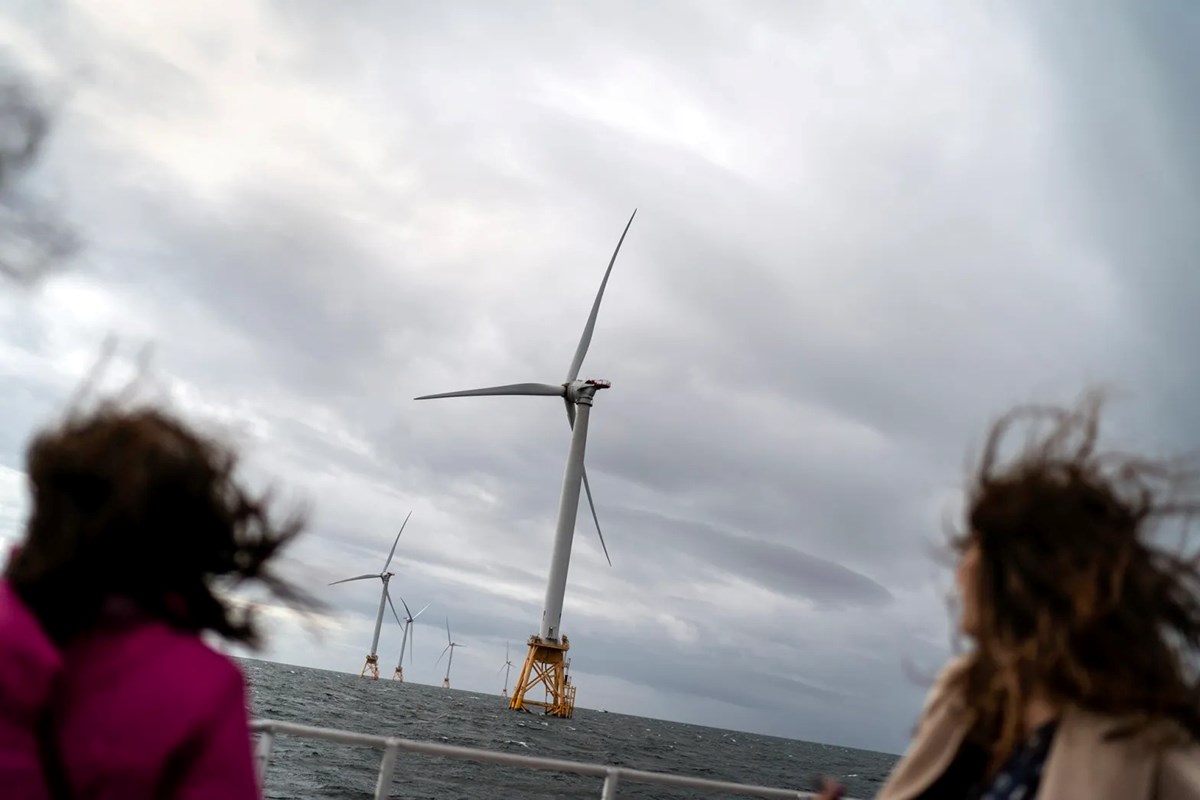 Turbines at America’s first offshore wind farm, owned by the Danish company Orsted, produce energy off the coast of Rhode Island.David Goldman / AP Photo
Follow us for more stories like this