Burned out cars in Grizzly Flats after the Caldor Fire destroyed most of the town. Tuesday, August 17, 2021.

Members of Congress are demanding answers after a recent CapRadio/California Newsroom investigation revealed how the U.S. Forest Service mishandled a plan that could have protected a California town from being destroyed in last year’s Caldor Fire. 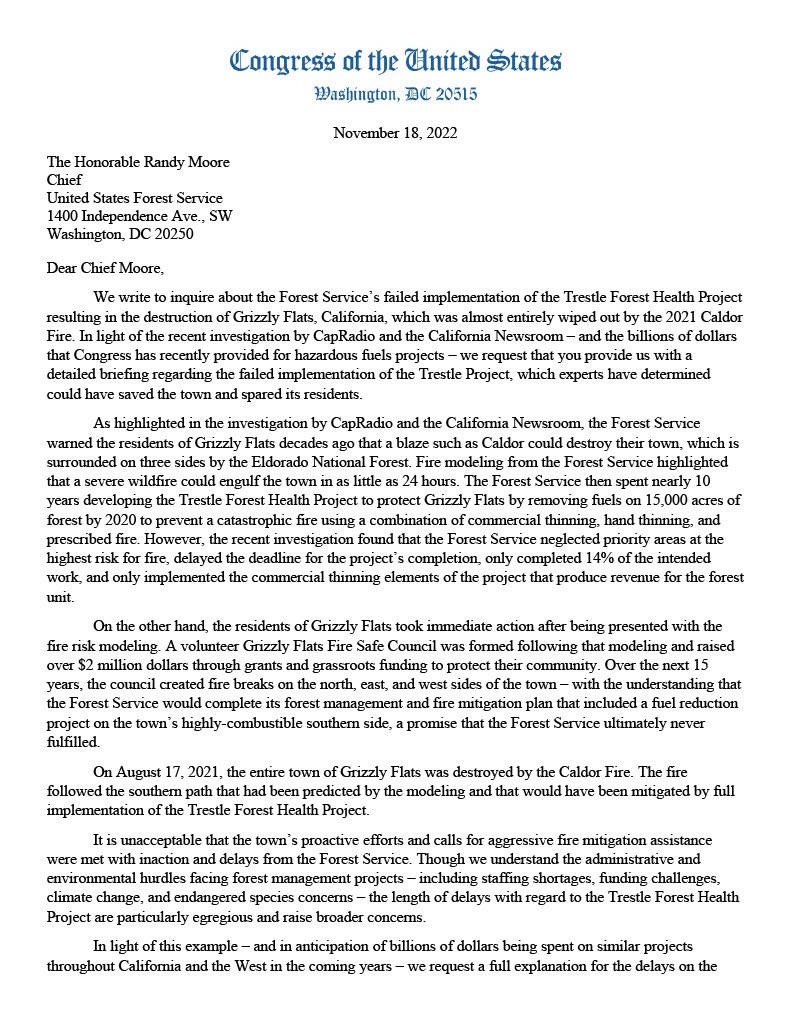 You can read the letter here.

On Saturday, a spokesperson for the Forest Service said in an email that the agency is working to provide the information requested by lawmakers.

Last August, the Caldor Fire destroyed most of Grizzly Flats, a Sierra Nevada community between Sacramento and Lake Tahoe with roughly 1,400 residents. The flames leveled more than 400 of the town’s 600 homes. While some have started  to rebuild, the future of the 170-year-old town remains uncertain.

The fire started in the Eldorado National Forest — which is managed by the Forest Service and borders Grizzly Flats — and blew through the community within days.

CapRadio and The California Newsroom, a collaboration of public media outlets across the state, published a yearlong investigation in August that revealed how the Forest Service warned — for decades — that a wildfire could wipe out the small town of Grizzly Flats, but didn’t deliver on its plan to protect the town.

About 20 years ago, the Forest Service identified Grizzly Flats as a community at high risk of wildfire. Agency officials organized a community meeting and presented fire modeling that showed how the town could burn. One modeling scenario predicted a burn path that mirrored what would eventually happen in the Caldor Fire.

In 2013, the Forest Service announced an ambitious plan to thin overgrown vegetation and set prescribed burns on 15,000 acres of forest around Grizzly Flats. The initiative, called the Trestle Forest Health Project, would reduce the kind of forest fuels that feed devastating wildfires. It immediately hit delays and didn’t begin until 2017. 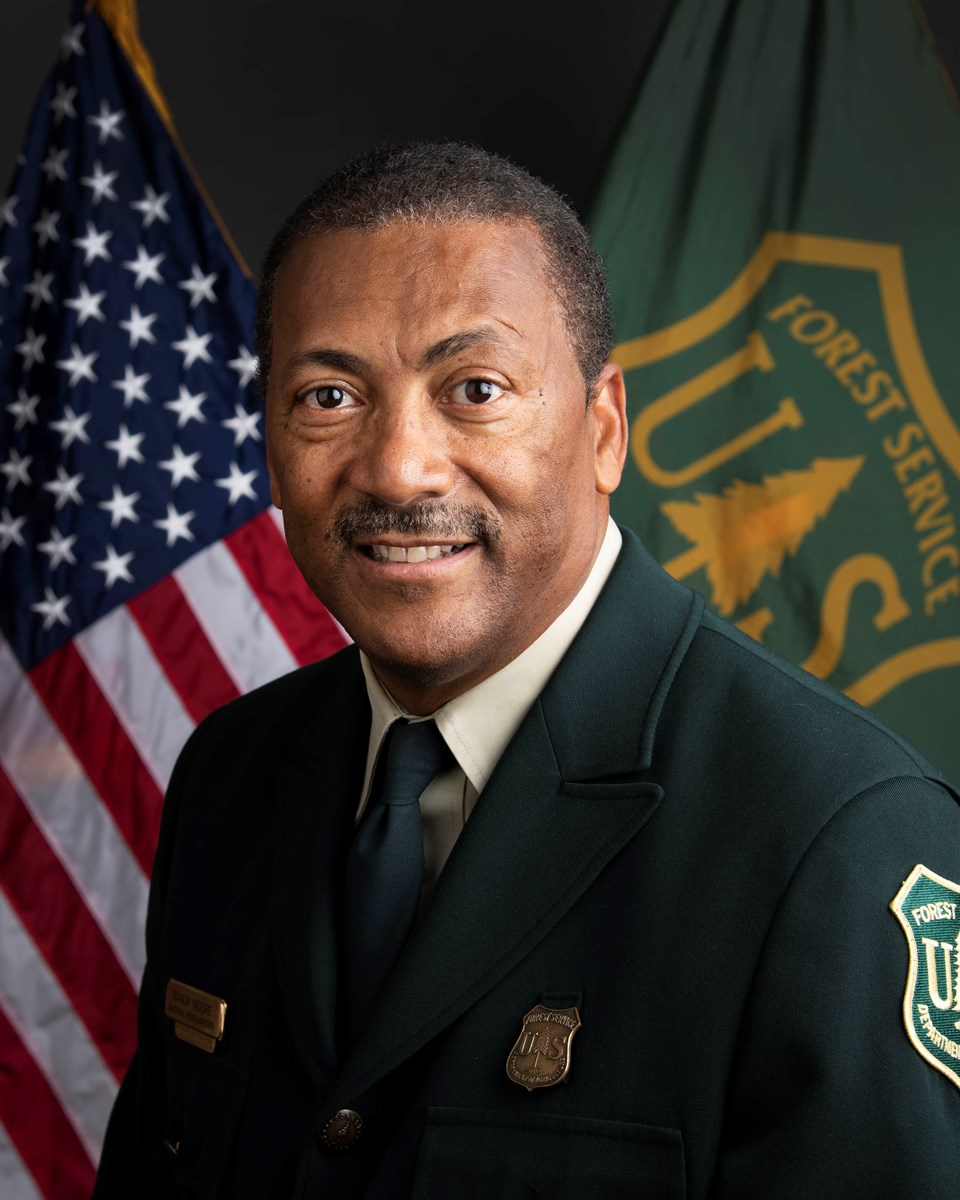 The Forest Service finished only 14% of the Trestle Project before the Caldor Fire ignited last year — despite its target completion date of 2020.

“In light of the recent investigation by CapRadio and The California Newsroom — and the billions of dollars that Congress has recently provided for hazardous fuels projects — we request that you provide us with a detailed briefing regarding the failed implementation of the Trestle Project, which experts have determined could have saved the town and spared its residents,” the letter states.

The letter — spearheaded by Sen. Alex Padilla (D-Calif.) — was signed by 12 Democrats and one Republican. It praised the enterprising residents of Grizzly Flats, who spent years trying to defend their town from the looming threat of wildfire. After the Forest Service meeting 20 years ago, a group of two-dozen volunteers formed the Grizzly Flats Fire Safe Council. The organization would go on to raise about $2 million and tackle more than 1,500 acres of fuel reduction and forest management work in the community.

“It is unacceptable that the town’s proactive efforts and calls for aggressive fire mitigation assistance were met with inaction and delays from the Forest Service,” the letter states.

Wildfire and forest management experts told CapRadio and The California Newsroom that completing the Trestle Project could have protected Grizzly Flats from the Caldor Fire.

“It’s sad to think about what could have been,” said Michael Wara, a climate policy expert at Stanford University who toured Grizzly Flats this summer. “[If] all this work was done by 2020, Grizzly Flats might still be there.”

Duane Nelson, a former district ranger in the Eldorado National Forest who helped oversee the Trestle Project until his retirement in 2017, came to a similar conclusion.

“There would have been a very high probability that Grizzly Flats would not have burned in the Caldor Fire,” he said in an interview. “It could’ve meant survival.” 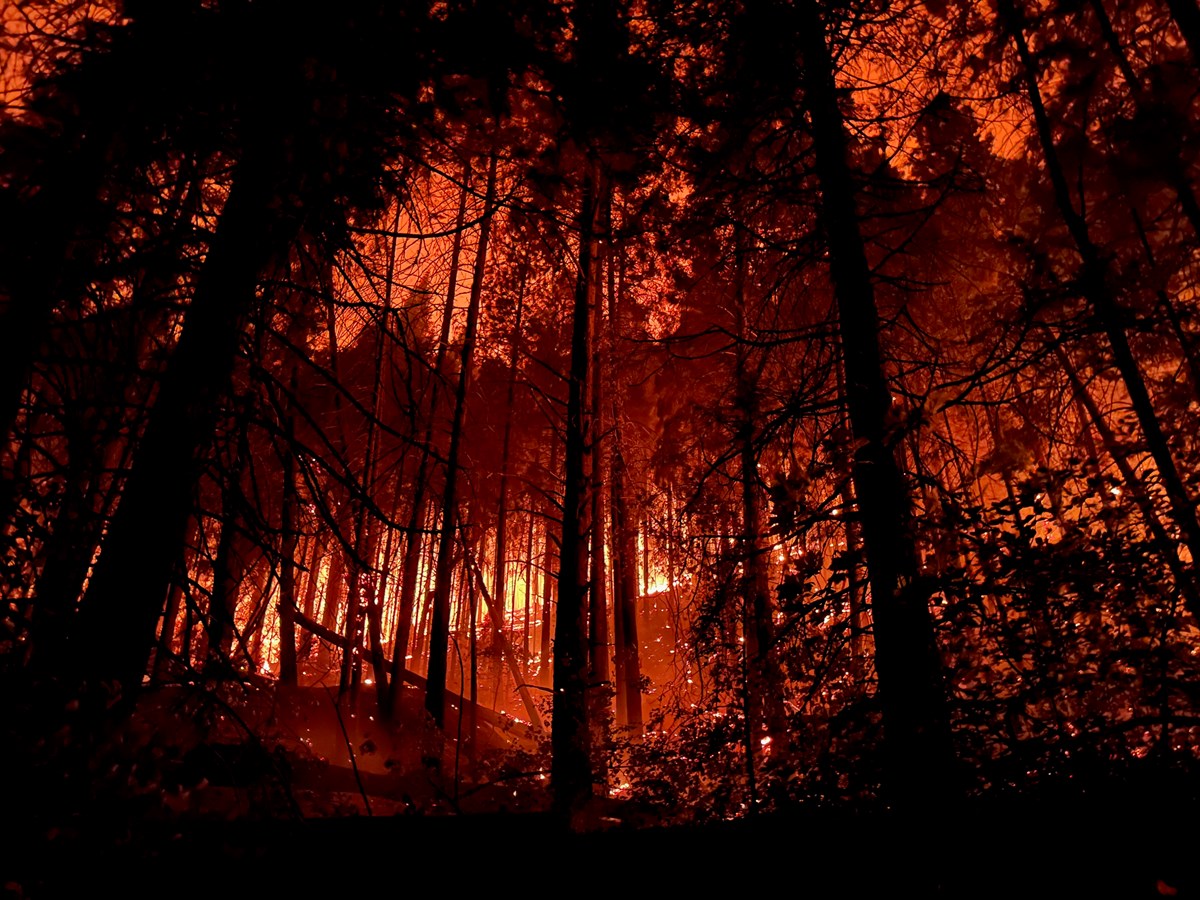 The lawmakers’ demands for information go beyond Grizzly Flats. The Forest Service manages approximately one-fifth of California's land, which has become increasingly prone to mega-fires in recent decades due to drought, climate change and a lack of forest management. There are hundreds of communities within close proximity to Forest Service land.

“We also ask that you name any other communities in California for which the Forest Service has identified a high risk of catastrophic wildfire and is in the process of preparing a plan — or has prepared a plan but not yet fully implemented it,” the letter states.

A partner investigation from the Los Angeles public radio station KCRW and The California Newsroom revealed the imminent risk of wildfire to Big Bear Lake, a popular resort town in the San Bernardino National Forest, about 90 miles east of L.A. The investigation reveals how the Forest Service has failed to execute multiple fuels reduction projects bordering the town. Shortly after publication of the investigation, Big Bear narrowly escaped the Radford Fire.

Details remain scant about the Forest Service’s plans to protect communities at large from wildfire. The agency has said it does not keep a central database of planned projects; instead, this information is maintained across a slew of National Forest and district ranger offices.

The Forest Service has not provided records in response to a Freedom of Information Act Request, submitted nearly a year ago by CapRadio and The California Newsroom, seeking detailed information about the agency’s planned and completed wildfire prevention projects over the last decade.