Poverty drops in California but only because of child tax credit, COVID relief funds

Angela Reyes Melo, 56, waits outside her car before driving to pick up supplies at a food bank on October 28, 2022, in San Diego. Reyes has been living with her son in a loaned car for the past four months.

But a deadline to file for those tax credits expires November 17, prompting advocates in California and a few state lawmakers to sound alarms.

“If you haven’t been doing your taxes, now is the time,” said Assemblymember David Alvarez, a San Diego Democrat who held a press conference reminding people to file and claim the tax credits.

“As an advocate for children, and as a parent of two, I know that the need is high right now, especially for families with children as they struggle to keep up with all the inflationary pressures.”

The California Policy Lab, a nonprofit that analyzes public data, estimates about 290,000 California children living at or near poverty could miss out on the 2021 child tax benefit —  leaving $928 million on the table, according to Brett Fischer, co-author of its latest report. That’s because 37% of the people who became eligible under the 2021 guidelines — mostly those making little or no income — may be unaware they need to file income tax forms to receive the credit.

“The concern is that a lot of individuals who were eligible for this credit would not end up going through the administrative burdens of applying and filing taxes in order to gain the credits,” said Hilary Hoynes, a public policy and economics professor and the Haas Distinguished Chair in Economic Disparities at the University of California Berkeley.

Contrary to many expectations, California’s poverty rate dropped from 16.4% in 2019 to a projected 11.7% in fall 2021, according to research by the Public Policy Institute of California, a non-partisan think tank, and the Stanford Center on Poverty and Inequality. They use the California Poverty Measure, which takes into account this state’s high housing costs and various government-funded anti-poverty programs and payouts.

Based on this measure, about 4.5 million Californians live in poverty, which is pegged at $36,900 annually for a family of four.

Millions more would have been in poverty, statistics show.

The federal government’s poverty rate generally measures income from a person’s work. Under that measure, the number of Californians who fell into the poverty income threshold — say, earning $36,900 or less for a family of four —  actually rose from 10.5% in 2018 to 11.6% in 2021.

But that rate doesn’t include such government assistance as child tax credits or public benefits like CalFresh. The government counts those in its supplemental poverty measure, and the Public Policy Institute similarly counts that additional help in its poverty measure.

With that assistance, 3.9 million Californians stayed out of poverty, the institute said.

A spokesperson for Gov. Gavin Newsom credited much of California’s positive poverty numbers to state spending, such as the $18.5 billion the state sent to residents via direct payments, $8 billion in rent relief and $2.8 billion that helped with overdue utility bills.

At the federal level, experts said the most impactful poverty relief was the expansion of the child tax credit, which paid families $3,600 for each child under 6, and $3,000 for children ages 6 to 17.

Sleeping in a car

In San Diego, some who received the extra money from the child tax credit say it definitely made a difference.

After sleeping in a borrowed car for four months, Angela Reyes Melo and her teenaged son have squirreled away almost enough money to put down a deposit on an apartment in Lakeside, a rural suburb outside of San Diego. Some of that $3,000 came from the expanded federal child tax credit, she said.

“It saved my life,” said Reyes, who earns about $18,000 a year as a cook while supporting her son whose disability leaves him mostly non-verbal.

Still, she worries about affording that $1,600-a-month apartment and acquiring beds and furniture. But just having a roof over their heads will be a relief, she said, likely safer than sleeping in a car or at some of the shelters.

Recently a man stuck his hand in the car while they were trying to sleep, she said, and people often fight at the temporary shelter in downtown San Diego.

“If you just look at them they start screaming… and try to fight you,” she said.

Reyes also worries that her stash of cash for her apartment is slowly being whittled away by rising food costs. “Just getting everyone a burrito can cost almost $50,” she said, referring to her four-person family.

When more is less

Advocates say there are hundreds of thousands of California families with very low incomes like Angela and her son. Some experts argue that COVID-era stimulus measures should be extended, pointing to the impact they’ve had on these families.

“It’s not rocket science for how to reduce child poverty,” Hoynes said. “We just need to give people money. And that’s what we did.”

But more money can feel like less with inflation. The Bureau of Labor Statistics’ quarterly index shows wages and salaries rose by more than 5% in the fiscal year ending in September — but when adjusted for rising prices, real wages and salaries declined by 3%. 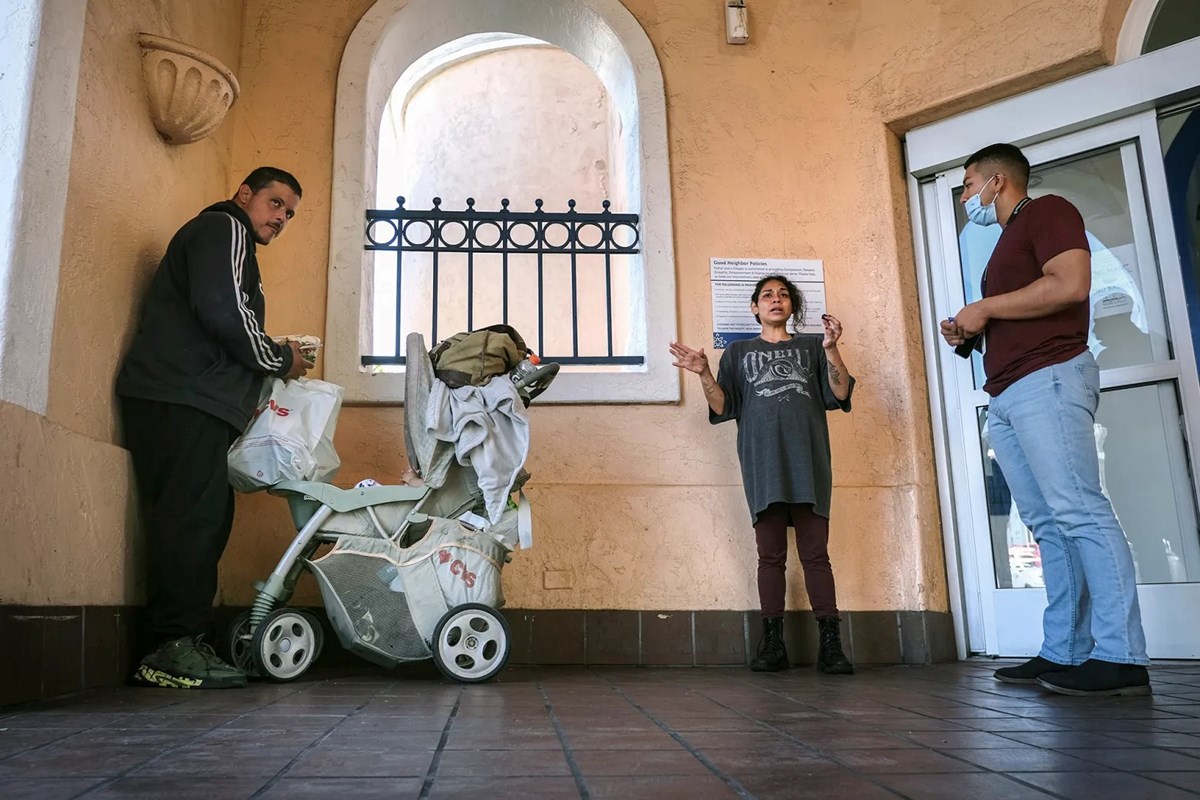 That’s how Rosalee Reyes, 29, said she spent her child tax credit. Reyes, her partner and their 18-month-old baby, Elly Rose, had been living in an apartment but recently moved into a temporary shelter adjacent to San Diego’s Civic Center downtown.

“Kids are very expensive — diapers, wipes, and things like that; the money was gone within a month,” Reyes said.

“We spent it pretty much on basic needs for Elly. At that time I did have an apartment, so it went to things like gas, lights, water … I think they should have kept the credit, because it was helping a lot of families. For people who live paycheck-to-paycheck, that just provided a little extra to get through the rest of the month.”

Valdez said she recently assisted a father who earned $27,000 a year but was living on the streets with his two children. He was unaware that stimulus funds were available because he had not filed tax returns, Valdez said.

Most of these COVID-era anti-poverty programs ended in mid-2021. Sarah Bohn, the vice president of research  and senior fellow at the Public Policy Institute of California, predicts that new economic data will show a different poverty picture in 2022.

“We’re expecting that when we look at 2022 poverty and income inequality, that it will increase,” she said. “It won’t look as favorable as it does right now.”

This article is part of the California Divide project, examining income inequality and economic survival in California.